Why was my colleague refused a US B1 visa?

I work for a small company in Sweden specialized in niched environmental consultancy involving a lot of field work. We have previously done sporadic projects in the US and have traveled under the Visa Waiver Program. My understanding is that we are allowed to perform professional services under this program granted that we are employed by a Swedish company and not a US one, but please correct me if this is wrong.

Recently, the company has started a small subsidiary in the US in order to make it easier to get contracts there. The subsidiary has been awarded a contract for reoccurring consultancy work (a couple of weeks work, 4 times a year during 2 years, I think) with the plan to subcontract the work to the parent company. Hence my colleagues (I will not be involved in this project) would be employed by a Swedish company, subcontracted during short periods by a US company to perform professional services in the US. Because of the reoccurring nature of this project the company was advised (by contacts in the US, I think) that it would be better for my colleagues to apply for a B1 visa.

A colleague of mine registered online for the B1 visa and got an appointment at the US Embassy in Stockholm. She went to the interview, provided a number of documents and answered a number of questions. She was asked repeatedly by different officials why she had applied for a B1 visa and not for an ESTA and she answered that she had been advised to do so by her employer. After the interview the officer who had conducted the interview discussed with his colleague and then handed her a yellow 214 B refusal letter. He said that her Visa was denied (but not why) and it could not be appealed, but she could reapply. Surprised by the outcome, she tried to emphasize that she would be employed by a Swedish company and not a US one. He answered that her doing work for the US subsidiary made her not applicable for the B1 visa. She then asked what type of visa would be suitable instead, and he replied that he could not tell her that.

After having left the interview she read the refusal letter which stated that she does not have enough ties that will compel her to return to her home country after her travel to the US. This seems like a very different reason for refusal compared to the one given to her verbally, and frankly quite difficult to understand. She is 39 years old and has a common law husband and steady well-payed employment in Sweden. She started working for the company quite recently (approximately 6 months ago) and before that she lived for two years in neighboring Denmark doing a postdoc at a university, but that was only 200 km away from her home in Sweden and she would go home over the weekends to be with her husband. The interviewing officer did not indicate by his questions that he was specifically interested in her proving her ties to Sweden. Additionally, since she has now been refused a visa she has to answer yes to that question on any subsequent ESTA application which means she is very unlikely to be able to get an ESTA in the future.

My colleague and our boss are of course trying to find answers to these questions through other channels, including seeking advise from lawyers, but it seems difficult to get useful answers. I understand that I may not be able to get definite answers here, but I would appreciate any input I can get.

On request I have scanned and uploaded her refusal letter below. The black boxes were added by me for anonymization purposes. 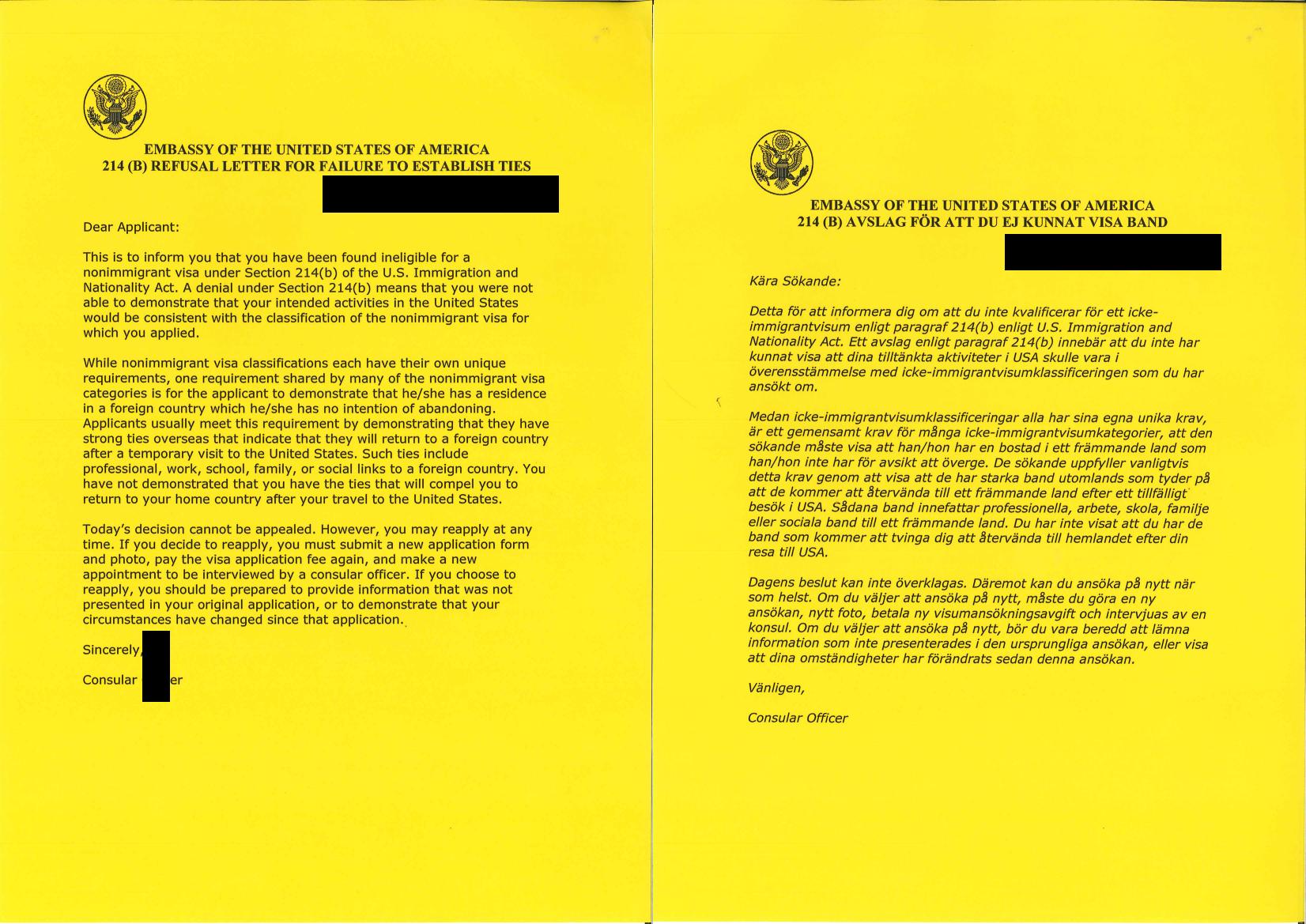 Both current answers give the advise to try to apply for an ESTA. I didn't mention this above, but she has already tried that after the B1 refusal and was denied that too (presumably because she had to give the information about the refusal in the ESTA application). Is there any hope in reapplying for a B1 visa and provide additional information? If so, when asked why she need a B1 visa in the next interview, should she simply state that she can't get an ESTA because the last visa application was refused because she didn't need a visa because she could instead get an ESTA which she now can't get because the last visa application was refused? (I'm working very hard here to resist the urge to invoke an overused literary reference to describe the situation.)

Section 214(b) is part of the Immigration and Nationality Act (INA) states :

Every alien shall be presumed to be an immigrant until he establishes to the satisfaction of the consular officer, at the time of application for admission, that he is entitled to a nonimmigrant status...

So officially the issue is that the consular staff were not convinced that your colleague was not planning to remain in the US. Note that this is NOT related to the type of work they were planning to do and whether or not it was relevant.

At the end of the day, the issue here is likely that you received bad advice - you colleague should never have attempted to apply for a visa at all.

For several years, the US has been very strict in giving B1/B2 visas to people from Visa Waiver countries. The Visa Waiver Program allows you to visit the US and remain for up to 3 months per stay, with (other than the maximum stay requirements) almost exactly the same conditions as a B1/B2 visa. The type of work you are allowed do when visiting under the VWP is exactly the same as that you can do when holding a B1/B2 visa.

In the eyes of the consulate staff, the fact your colleague is applying for a visa when they have access to the VWP is suspicious. At best it implies they are planning to stay for more than 3 months at a time - whilst at the same time likely saying that they are not. It is enough to make them doubt the authenticity of the application, and thus whether the person actually has non-immigration intent as is required - and thus the refusal under 214(B).

Unfortunately this mistake leaves your colleague in a bad position. Historically they would not have been able to use the VWP program any more now that they have a failed visa application, however that has now changed and they are now allow apply for an (new) ESTA and if that is approved then they CAN use the VWP program in future. (If they hold an existing ESTA it is now invalid - they must re-apply). This is really their only forward course of action - apply for a new ESTA, and hope that it is approved. If it is not, they can try again in ~6 months, and so on.

Realistically there is likely no other visa type they can apply for - B1 (or the equivalent "WB" status under the Visa Waiver Program) is almost certainly the correct type. (The exact details may depend on how the actual contract/etc are written, but that's something only an immigration lawyer would be able to confirm).

Us Swedes can enter visa-free for the very same purposes that are covered by B visas, full stop!

I just spoke to the CBP supervisor at JFK Airport, who said that, provided the source of income is located in Sweden, you can enter visa-free or on a B1 visa. Otherwise an H visa is required.

You say the visa officer gave you an explanation not consistent with the one in the refusal letter. In this case the letter is the "correct" version. Section 214(b) is triggered when the applicant hasn't been able to adequately demonstrate his/her ties to their country of residence; as such the intended activity is not relevant for this.

He probably assumed her source of income would be US-based, in which case she would need an H (not B) visa.

If I were your colleague, I would contact the CBP via this form, submit the ESTA application number and passport number, and explain the situation in detail, uploading the refusal letter from the embassy as well as anything your employer has told you in writing regarding this matter. There is a small chance the CBP may revoke her VWP ineligibility.

If this does not happen, then sadly she simply has to apply for a new B1 visa, and will not be able to enter the US visa-free ever again.

(to be precise, in theory it is possible if a new ESTA is approved; however you wrote yourself one was denied, and as stated by the CBP:

Not the answer you're looking for? Browse other questions tagged visas usa visa-refusals b1-b2-visas or ask your own question.

4
Risks with applying for National Interest Exception for Travel to the US
3
Can one apply for a B visa to USA just to avoid the waiver-of-rights inherent in the VWP?

7
UK visa refused - unable to prove genuine relationship with sponsor, unexplained deposits
6
My girlfriend was a refused a visa to visit me in the UK. What now?
10
Why were we rejected under 214b? USA
5
Refused US B2 visa under 214(b), can I reapply after improving my circumstances?
1
Been refused a Visa and an ESTA, when can I apply again?
1
After being refused entry, how long should I wait to apply for a US B2 visa?