In which museum in Spain I can find the last flag of the Arabian armies that used to occupy Spain for 700 years (Andalus). All I find about it in the net is this photo which seems like a festival for Spanish victory in the last war with Arabs: 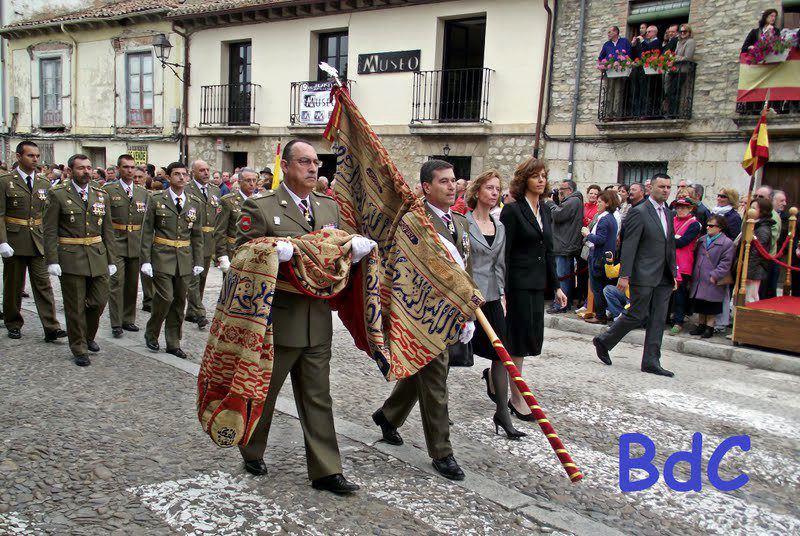 In which museum I can see this flag? Or any museum about the Andalus in general?

Abbey of Santa María la Real de Las Huelgas (Burgos) (El monasterio de Santa María la Real de Las Huelgas – Burgos) is a monastery of Cistercian nuns located approximately 1.5 km west of the city of Burgos in Spain. The monastery is open to the public. Visits are administered not by the monastic community, but by the Spanish heritage organisation Patrimonio Nacional, which maintains the property as a Spanish royal site. on display is : The tapestry that covered the tent (not the last Arabian flag) of the Almohad caliph Al Nasir, known to the Christians as Miramamolin. This tapestry was seized by the victorious Christians at the Battle of Las Navas de Tolosa on July 16, 1212. When Sancho VII of Navarre's men drove through an enchained circle of African slaves guarding Miramamolin's tent, the caliph fled with great haste, leaving this tapestry along with several other prizes of war behind for the exultant Spanish.

Right, after some investigation, there are a few museums in Spain related to Al-Andalus and that time period. Which one has the flag in, though, I'm not sure.

However, here are some useful links that may aid in your search:

Not the answer you're looking for? Browse other questions tagged spain museums or ask your own question.

5
What artsy/museumy/culturalish stuff is there to do in Indianapolis?
5
If I buy a Renfe ticket online, in what form do I get the actual ticket?
15
Where in Chengdu can we see Sanxingdui artifacts, besides the museum in Guanghan?
1
I am British citizen, my children hold a non-EU passport, Schengen visa to Spain was refused, what went wrong?
5
Re-enter Spain on student visa after visiting as a tourist
12
Will a verbal ban from Spain 30+ years ago prevent my husband from taking a cruise out of Barcelona?
3
Exit and re-enter Schengen area if country that issued the visa is the final destination
6
Dual citizenship causes confusion at passport control