Is it safe to stand next to airport X-ray machines?

I am a little freaked out because when I was traveling over Christmas I noticed that a carry-on baggage scanner had a really long shielding tunnel. The shielding is metal plates that are placed along the conveyor and looks like this: 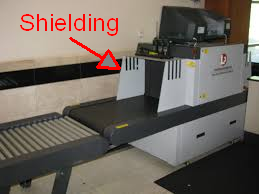 I never really thought about it before, but different machines have different amounts of shield. Some of none, some have a foot or so, and the machines I just saw had like 3 feet of shielding. One thing to note is that the shields usually have holes and the x-rays will go right through those holes.

Since in many cases you have to stand right next to the machine to make sure your bag is getting fed into the machine right, it is concern, especially since your nuts are right at beam height.

According to the FAA slash "Department of Health and Human Services" there is nothing to be concerned about:

Q5: Is it safe to stand or walk near a cabinet x-ray system while it is producing x-rays?

For comparison, the average person in the United States receives a dose of about 360 millirem of radiation per year from background radiation. (Note: 1 milliroentgen of exposure to x-rays will result in approximately 1 millirem of dose. These terms are defined later in this document.) Background radiation is radiation that is always present in the environment. Eighty percent of that exposure comes from natural sources: radon gas, the human body, outer space, rocks, and soil. The remaining 20 percent comes from man-made radiation sources, primarily medical x rays.

Hmm, ok, so if this is true, why are they putting 3-freakin-feet of shielding at the entrances of the machine???

The ones at the start of the machine are there as guides, to make sure bags are on the conveyor belt and not rubbing against the surfaces inside. The ones at the exit are to keep impatient travelers from reaching into the machine to grab their bags (because then they would get slight exposure to radiation).

The machines themselves emit very little radiation, as that could be a occupation health issue otherwise since there are TSA agents stationed right by the mouth and exit of the machine.

Source of info: just asked a buddy who works at the local airport.

Not the answer you're looking for? Browse other questions tagged airport-security x-ray-machines or ask your own question.

34
Why do you need to take out your laptop from your bag during airport security checks?
5
Where in Montreal-Pierre Elliott Trudeau airport are the millimeter-wave body scanners?
9
“Airport-friendly” suspenders (braces) with AIT
7
Can airport security find a waterskin?
5
Does Istanbul airport have x-ray scanners before the exit?
13
Ceramic knives and airport (or any other) security
1
Is my leather pouch blocking bag x-ray scanners?
21
How can one travel with X-Ray sensitive equipment or electronic devices?
10
Why does my baggage need to go through X-ray to go out of the airport in Panama City?