When to use the emergency brake in a train?

In almost every train there is an emergency brake. 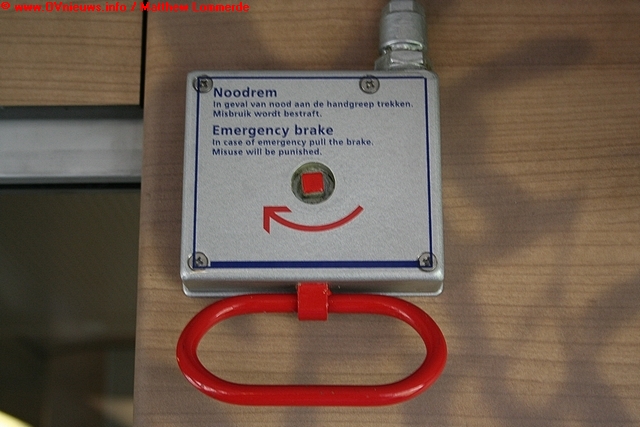 I was wondering in which scenarios a passenger would need to pull the emergency brake.

Building on the previous answers:

If you notice a condition where any sensible mind would think that it is extremely dangerous for the train to continue moving. Dangerous here can mean:

The emergency brake can also be helpful if the train hasn’t yet actually left the station but is about to and you need help fast. For example, if another passenger collapsed and requires medical assistance. The reasoning why this should not occur en route is that it is easier for the paramedics to get to stations and they might even be ready at the platform awaiting the train. But if you are already at a station, time is only lost by travelling to the next one.

I already noted that fires need to be large enough that extinguishing them on-site seems impossible for pulling the brake to be warranted. Likewise, if any physical attack originating from other passengers happens (e.g. robberies, shootings), the emergency brake is better not pulled but the train staff notified (so the doors can be kept closed if necessary until the police arrive). There had been a shooting on a local train in the Allgäu where the two suspects jumped of the train at seemingly rather low speeds (I think 80 km/h — on other segments of the route it does 140). One died on the spot, the other was severely injured and didn’t get far, so having a train in motion is the better option.

And to complete the anecdotal evidence: Apparantly on one train route in Switzerland, somebody kept taking the express train that doesn’t stop at his station rather than the (slower) local one that did. He knew exactly where to pull the brake so that the train would slide to a stop exactly at the platform. Somehow, he managed to disappear before the train staff caught him (and they should have been warned because that had happened a few times). Unfortunately, the story is second hand coming from me, so I don’t know whether it was really true.

In the Eschede rail disaster, a passenger noticed a chunk of steel that had shot up through the floor of his carriage, and began consulting with train staff as to whether he ought to activate the brake, while the train was still moving at speed. In fact that chunk was part of the train's wheel, which shortly failed catastrophically.

I think it's generally accepted that he really ought to have pulled the brake when he first saw this big chunk of steel shoot up through the floor.

I am sure you can construct other reasons, more or less obscure. At least the first I saw happen once.

It may be useful for robberies, rape, homicide, or other crimes, as it forces the bad guy to run on foot or get collected.

Just as another datum, I've been involved in two emergency brake incidents in my life, both on London Underground (tube) services. In both I had no hesitation in concluding that the brake should be triggered, and in the case when I myself tried to trigger it no penalty followed.

In that case, a mother got on a busy tube train towing an unwilling child perhaps five years old, at the last moment before the doors shut. The doors closed with the child mostly still outside, holding the hand of his mother. His arm was thin enough that the rubber door edge strips compressed around it without triggering the "something in the door" detectors that would normally cause the doors to reopen automatically.

Two others and I all reached for the emergency brakes, whilst three other people grabbed the edges of the doors and attempted to force them open, to relieve pressure on the child's arm. I have no idea which of us pulled the handle first, but the driver got the message, and the train either did not move off or immediately braked to a halt (I can't recall which). Both mother and child were extremely upset, but unharmed.

Other reasons to pull the brake:

Note that you'll want to get a hold of a crewperson immediately after pulling the brake under the first two conditions as they'll need to set the handbrakes on the cars in question promptly.

In 2009, an American tourist decided to hang onto the outside of The Ghan train across the Australian Outback in sub-zero conditions. He would likely have died of exposure if he had not been rescued. In this case, he was rescued via an emergency stop triggered by a crew member. This is a kind of case where hitting the emergency brake can save someone's life. Here is a situation where @NateEldredge 's comment about continuing to the nearest station for medical assistance rather than stopping might not apply, as the article mentioned that the tourist was in danger of falling off. Stopping the train right away helped to prevent that from happening.

You use the emergency brake if the world as you know it is collapsing around you and if you believe that a stopped train will be generally a safer place than a moving train.

In 2012, a train started leaving Prague main railway station despite a red signal and despite another train waiting on the same track in the tunnel. A passenger inside the train noticed the signalling and heard the sound of a switch being split (i.e., damaged by the train coming from the wrong direction) and used the emergency brake. The trains came to a halt 23 metres from each other. Compare this to the Eschede disaster referenced in another answer here.

Ignore emergency brakes until you are in an emergency of that grade. If the train seems to be running smoothly and no one is in obvious danger, count on railway personnel to figure everything out for you.

In response to comments: This is a very simple rule. If no one is in danger, it is none of passengers' business to determine whether the train should be moving or stopped. The simple rule is enforced with fines. Application of the simple rule may not always be that simple, especially if one is agitated, intoxicated, or in unfamiliar surroundings such as in a foreign country. I intentionally gave an example where a high level of awareness was necessary to correctly judge the situation as dangerous in the first place. First time users of the emergency brake should just try to stick to the simple rule, especially when travelling in a foreign country; but they also shouldn't hesitate to use the brake when the irregularity and danger becomes obvious.

I'm offering this simple answer beside the casuistic answers because the currently available ones don't seem to be based on real data or even real anecdotal situations. Disconnected trains are real. Disconnected trains whose engineless half keeps running until a passenger applies the emergency brake, that's imaginary.

When the danger is caused by the passengers themselves, and not by an accident, it may also make sense to pull the break.

A few months ago I witnessed the following inside of a carriage full of people (carriages non connected):

I believe the panic was not only caused by the fight, but by the possibility that the group would involve other people around or withdraw weapons of some kind.

In any case, if the train was already outside the station, without the presence of the police outside, the fight would probably escalate even further and people would still pull the brake for their own safety.

Note that the emergency brake that you as a passenger can activate can be overridden by the driver. The driver has the option of talking to you and then decide whether or not to override the brake. This allows the driver to not only reject bogus use of the emergency break, it also allows the driver to stop the train at an appropriate location, should that be needed. Suppose e.g. that the train is about to stop at a station within a few minutes and there is a medical emergency. If there is no train conductor in sight (some very large trains only have one train conductor), then one should use the emergency break to communicate the need for medical assistance to the driver.

34
Where is the safest place in a train?
5
Is there a thematic train trip based on Christmas?
11
Which is the largest train in terms of passengers?
45
Who compensates my UK train ticket when the train in the ticket didn't exist?
2
How long do I need from landing to reaching the train station in Zürich Airport when arriving from London?
16
Board Chinese train at a different station (on-route)
8
Most remote passenger train station
4
Night train Fukuoka - Tokyo