How to tell scam taxis from legitimate ones in Bangkok? Does it make sense prebooking?

I know that most horror stories never happen, still I think it might be good to know how to tell apart legitimate taxi drivers in Bangkok from ones that will overcharge you...

As a rule, taxis are fine in Bangkok, it's the tuk-tuks that really prey on clueless tourists. But there are four simple things you can do to reduce the odds of taxi problems:

Rule 1, learn taxi colors. Yellow/green taxis (below) are owner-operated, and this group contains the vast majority of bad apples. All other cabs are company-operated and generally held to higher standards. That said, there are tons of these and most of their drivers know Bangkok quite well, which is not something that can be said for many of the corporate drivers, so I wouldn't go out of my way to avoid them. 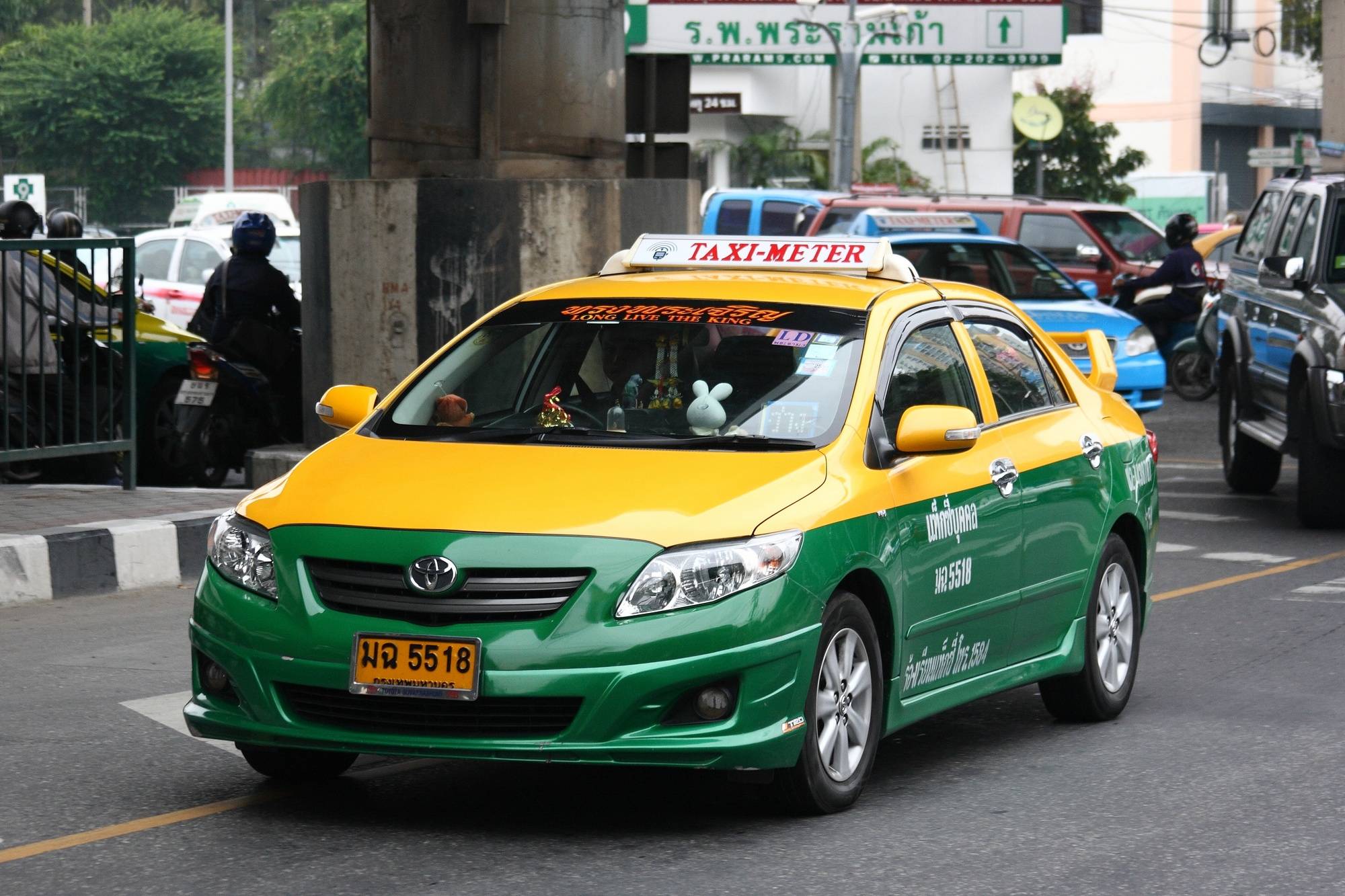 Rule 2, never get one of the cabs loitering outside hotels or tourist traps. Instead, hail one on the move off the street, or if at your hotel, ask door staff to get one for you (and tip them!). At the airport, the prepaid cabs are also fine, and it's the arrivals hall touts that you need to steer clear from.

Rule 3, speak a few words of Thai, which makes it clear you're not a total newbie. So greet the cabbie (Sawatdee khap), tell them where you're going (Pai [X] na khap), and:

Rule 4, ask them to use the meter (Poet meter na khap). By law, they have to use it, and if they refuse for any reason (offer a fixed fare, say it's broken etc), just get out and hail a new one.

And that's it! And seriously, don't worry too much: I've hailed literally hundreds of cabs in Bangkok and I've gotten ripped off exactly once. (Cab from Suvarnabhumi Airport using the meter, but doing a nonsensical long highway loop to run up the fare. When I called him out on arrival, he sheepishly reduced the fare back to what it should have been.)

But if you're still worried, Uber and GrabTaxi are available in Bangkok as well, neatly sidestepping almost all potential problems with communication and fares.

Along with @jpatokai's excellent answer,

Rule 5: Never put anything in the trunk. You lose considerable leverage if you can't simply leave the taxi. This also prevents drive-off theft.

In addition, this isn't quite a rule, but I also found it helpful to have my phone's mapping program open and visible. This prevented metered taxis from taking the long way around to a place, assuming that I don't know the local geography.

There are already some great answers here, and I realize I'm late to the party.

However, one thing that I didn't see mentioned and that I've found helps prevent fixed fares most times is to simply get into the backseat of the taxi before telling the driver where you're headed. Standing outside and asking if he will take you to wherever you're going is basically just asking for a fixed fare.

And as already mentioned, if they still refuse to turn on the meter just get out and get the next one. Like most things - don't act like a tourist (i.e. standing outside with a map in your hand and asking him through the rolled down window if he can take you to Khao San Road :) and your success rate will greatly improve!

Another great tip is have the name of the place you're going ready in Thai script in your phone. Just search for the place in your map app or Google it. Even if there is no name in Thai the driver can hopefully read the address even if it's in english.

To more specifically answer your questions:

Well, if you use Grab you'll get a normal taxi anyway. Almost every time I've used it the driver has called me up to ask where I am, instead of just looking at the location. This gets really annoying if their english is non existent, and I frankly find it easier to just get the same taxi on the street (and save the booking fee).

If you want the least hassle and the best experience, I guess you could try Uber. The cars and drivers are usually in a whole other class than the regular taxis, but my personal experience in Bangkok is that you might have to wait 20 minutes or so for the car to show up, and the price might be slightly higher than a metered taxi.

However, at both airports there are pre booked taxis available. You go up to a counter, tell the person there where you're going, and they make sure to instruct your driver about your destination. Usually completely hassle free. There is a fee for this service (don't remember how much, but not much). The driver might ask you if you want to take the tollway or not - if you want to beat the traffic it's a good option, but make sure you have cash for the tolls since you're expected to pay for them directly, not when you arrive at the destination.

Not sure what you mean by scam taxis, but I suspect you might have heard stories of naive tourists who paid ripoff amounts for a ride with a tuk tuk. These things are generally tourist traps if you don't know what you're doing, especially in Bangkok.

I was with a local Thai recently and when we parted she was kind enough to catch a taxi for me and inform the driver of the destination (my room) in Thai. Even then once I got on the taxi, the driver didn't use the meter and asked me to pay 250 THB. I negotiated and lowered it down to 100, but she said it was still expensive. It seems that, locals too can't tell apart a legitimate one from a scam just by the look of the taxi.

So as long as you take a taxi on the street, you are likely to have to deal with the scam in the car.

In order to avoid the scam, I recommend GrabTaxi. Uber is also available but it is expensive enough that the overcharged taxi might still be cheaper than a legitimate uber. The problem of GrabTaxi is that you couldn't get it easily since it is too common that it shows no available taxi near you, especially at night.

I recently went to Thailand and the best thing I did was to user Uber/Grabtaxi instead of hauling for taxis on the street. I didn't find it expensive at all. They usually took 3~5 minutes to get to my location. Also I didn't had to negotiate the price nor to ask the taxi incessantly to use the meter, which can be tiring.

Not the answer you're looking for? Browse other questions tagged tips-and-tricks taxis bangkok scams bkk or ask your own question.

43
What to do when a taxi driver uses the meter but at the end of the ride clears the meter and pretends we had agreed on some higher price for the ride?

8
How to go from Bangkok airport to Khao San?
46
Will getting a refund from an ESTA scam site cause me to be blacklisted from the US?
23
Paddington to Euston with kids: minimum walking by tube or by taxi?
45
How does the taxi scam work at Luohu station in Shenzhen?
3
Possible taxi scams if fare is agreed in advance?
20
Moscow SVO airport, how to avoid scam taxis without pre-booking?
43
What to do when a taxi driver uses the meter but at the end of the ride clears the meter and pretends we had agreed on some higher price for the ride?
4
How do taxis in Bangkok charge for waiting time?