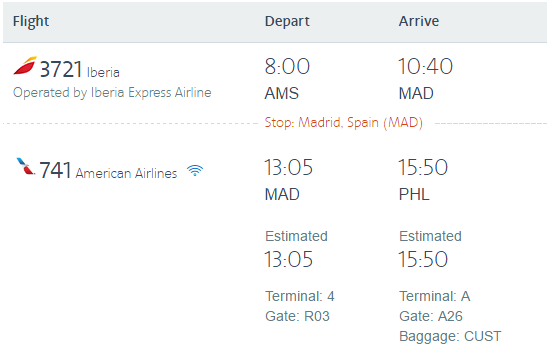 4
Confused about the baggage fee for different airlines
3
Luggage through check on domestic-domestic-international flight
21
Iberia changed my flight and I now have a 24+ hour layover in Madrid, what are my rights?
7
Do I have to re-check luggage on a layover in Philadelphia?
2
American Airlines bag overweight fee for connection flight with Qatar Airways
3
Where can I pay for the Extra Bag on the American Airlines Site?
4
Do I need return flight proof in order to board from Madrid to Montevideo with Iberia?
1
My Iberia flight was cancelled, what are my options?
3
Connecting flight and checked luggage with Iberia
1
Missed connection & long delay on an Iberia/American flight from US to Spain. Am I entitled to compensation?