Is it possible to order airag at bars in Mongolia?

I've been to a couple of bars, mainly up-market, in Mongolia, and none of them seemed to have airag (fermented horse milk) in the drinks list. I was able to drink some airag at a ger next to a highway which was advertised by a sign hand-written in Mongolian, however.

Is it possible to order airag in bars?

Generally speaking, no. Airag is a seasonal, niche, perishable product, that as far as I can tell is not commercially produced and is hence not regularly available at supermarkets, liquor stores or bars.

Visiting Ulaanbaatar just before the Naadam festival a few years ago, I did see a few pop-up stalls selling the stuff, but generally it's made at home and only sold where produced. 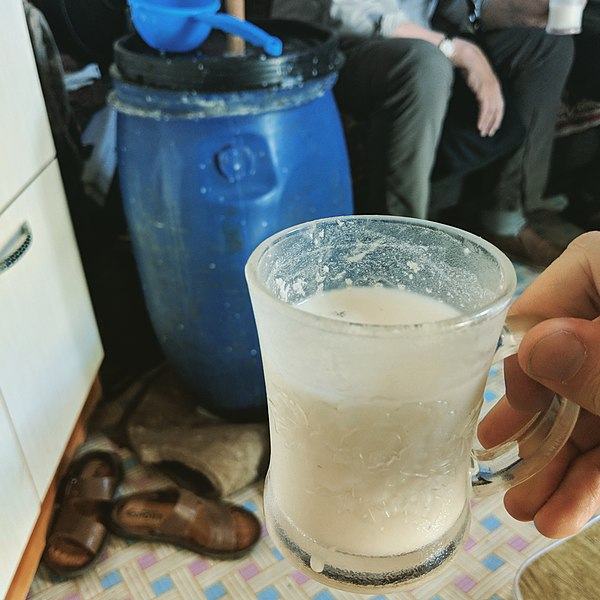 In the picture above, the airag was produced in the ger (yurt) it was sold in, more specifically in the blue plastic barrel in the background. Эрүүл мэндийн төлөө!

I had airag from a roadside ger (that was obviously tourist-friendly) in Ulan Bataar years ago, in late July or early August.

Not the answer you're looking for? Browse other questions tagged food-and-drink mongolia local-cuisine or ask your own question.

9
Strange hotel sheets in Mongolia
14
“Cheek kissing” between men in Mongolia
14
Throat singing lessons in Mongolia
7
Mongolia Visa-free regime
5
In Mongolia, are dairy products offered to tourists typically processed?
10
Roadtrip in Mongolia WITHOUT guide possible?
6
Is Inner Mongolia safer than Mongolia?
3
What documents required in order to pass by car from Russia to Mongolia?
5
Dehydrated commercially prepackaged food into China and Mongolia
22
Satellite navigation in Mongolia?