I'm a European and a huge fan of long distance offroad-motorcycle travel, would love to hear some advice on "wild-west" landscape locations (for the lack of a better word).

Something similar to The Magnificent Seven (2016 remake) or WestWorld tv show: 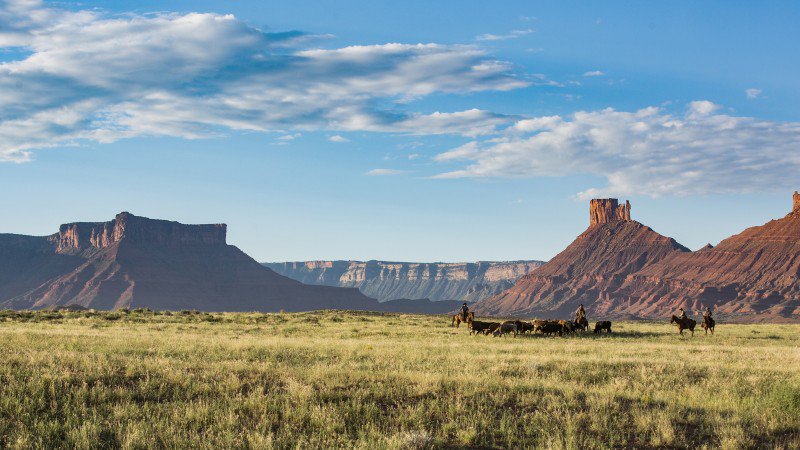 I've visited Grand Canyon and Monument Valley, and both are kinda "desert-ish", while the one on the picture looks more Northern (since there's grass and trees, sometimes even forests).

Where should I go? Utah?

PS. I'm not a huge western-movie fan, just like this kind of nature :)

jazzcat's photo shows "The Priest" and "The Rectory" in Castle Valley, Utah, from the north. Castle Valley is just NE of Moab, Utah. It's an area familiar to rock climbers. photo and area info on Mountain Project

Since you mentioned those two particular shows, you can find the exact shooting locations from IMDb

I don't personally know any of these locations, but I have been to UT and AZ and recommend them both. They have a huge variety of landscapes that are all interesting.

New Mexico also has a variety of landscapes, many of which are similar to the described ones. 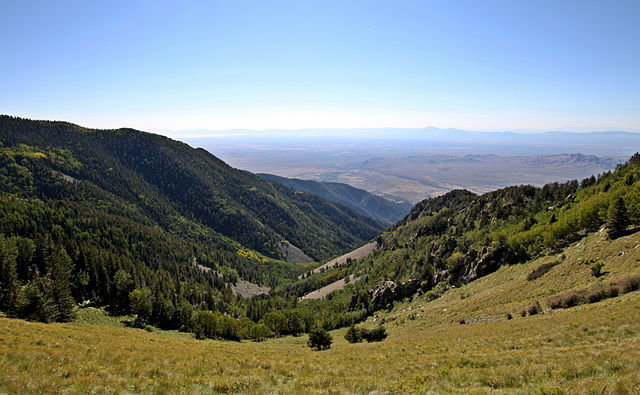 Lincoln National Forest is humongous and has a great deal of paths, roads, and other ways to traverse it (but do so gently, please!). 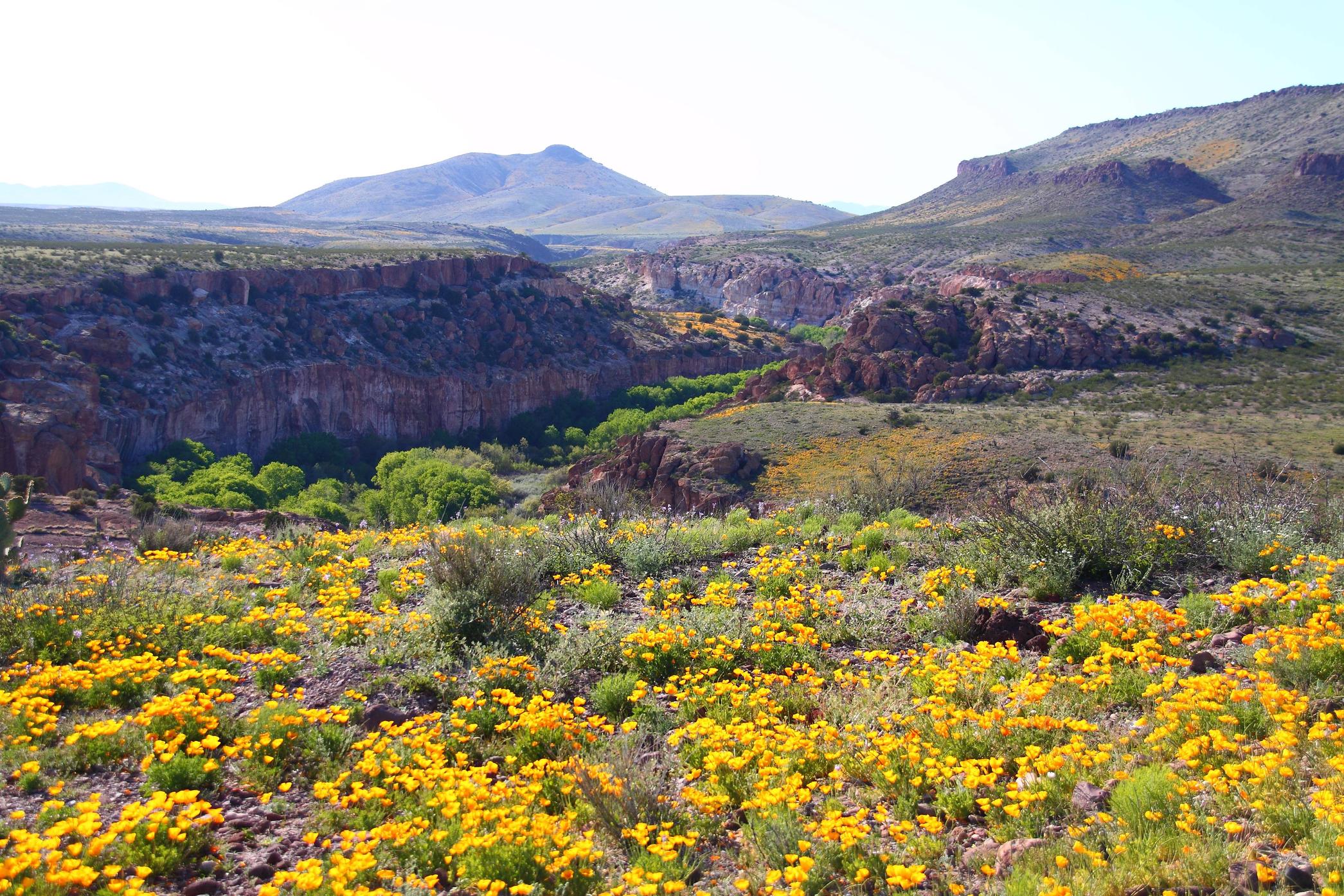 The Gila River valley (in the southwestern quarter of New Mexico primarily) is more lush and wet than most of the rest of the state. See this article for some beautiful pictures (and some interesting water politics!).

I've visited Grand Canyon and Monument Valley, and both are kinda "desert-ish", while the one on the picture looks more Nothern (since there's grass and trees, sometimes even forests).

If you want more northern, there is Smith Rock in Oregon: 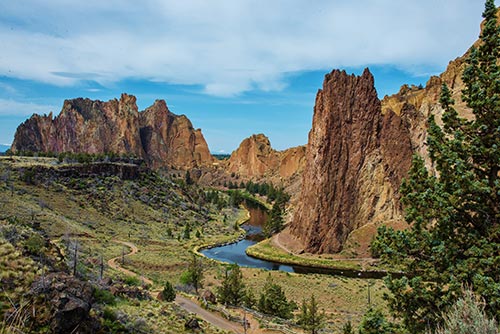 but it doesn't have the miles and miles of landscape of the desert southwest. There are really only a couple of views like the above

Another one off, and definitely not western, is Seneca Rocks in WV: 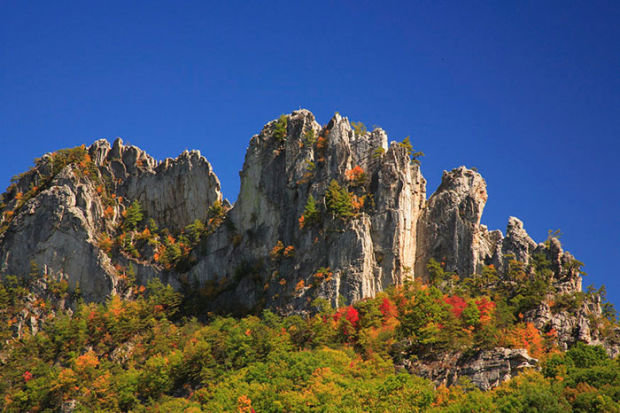 It is more forest than prairie. Like Smith Rock, it is a single formation

There is also City of Rocks in ID: 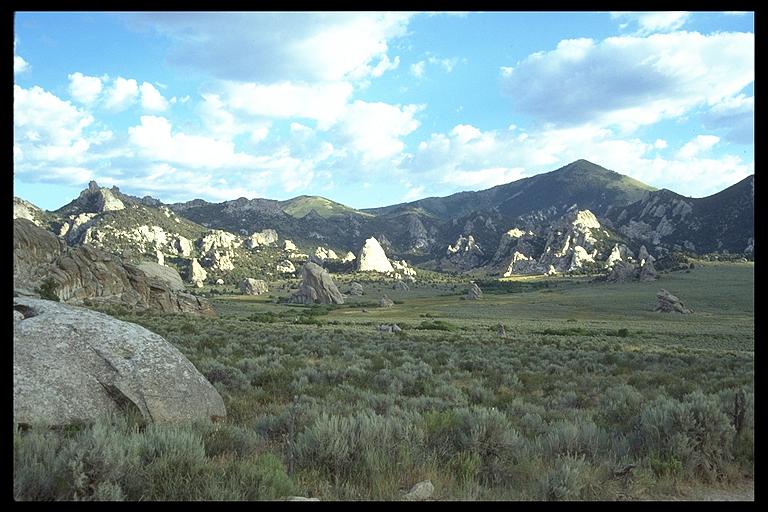 Some destinations that come to mind:

Of course, as you've noticed, the Arizona locations don't tend to have grassland nearby. The Dakotas, however, have lots of both desert and grasslands, sometimes quite close together due to terrain. Driving around the Western areas of the Dakotas and Eastern areas of Wyoming and Montana, you will see lots of enormous ranches with large herds of cattle. Also, you're likely to see at least a few herds of buffalo roaming around in the grasslands, especially in the national or state parks.

One note on the Dakotas: you probably don't want to visit in the winter unless you really like snow and very cold temperatures (think -20 to -40 C.) While the temperatures there may be +40 C in the summer, they can get insanely cold in the winter. Many of the scenic roads there are completely closed during the entire winter season.

I highly recommend Sedona, Arizona and Red Rock State Park just outside of Sedona. I have visited here before and the red colors of the mountains are breath-taking. Have a look at a road through Sedona:

Another location to consider is the state of Utah and its National Parks. They advertise the "Mighty 5" which are 5 of the most beautiful parks. They are:

Another recommendation just came to me: Valley of Fire State Park in Nevada. This park is just outside Las Vegas so that is a bonus if gambling is your thing. 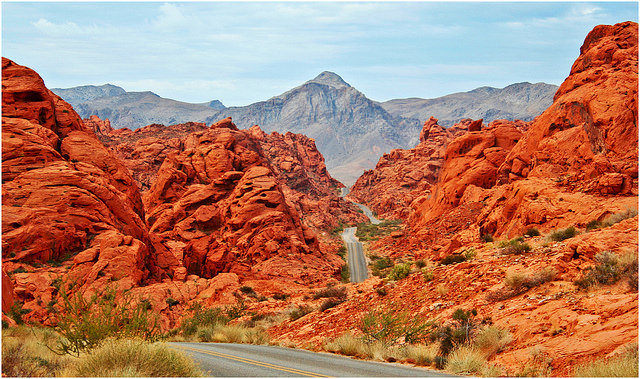 Let me recommend a destination in another state - California! 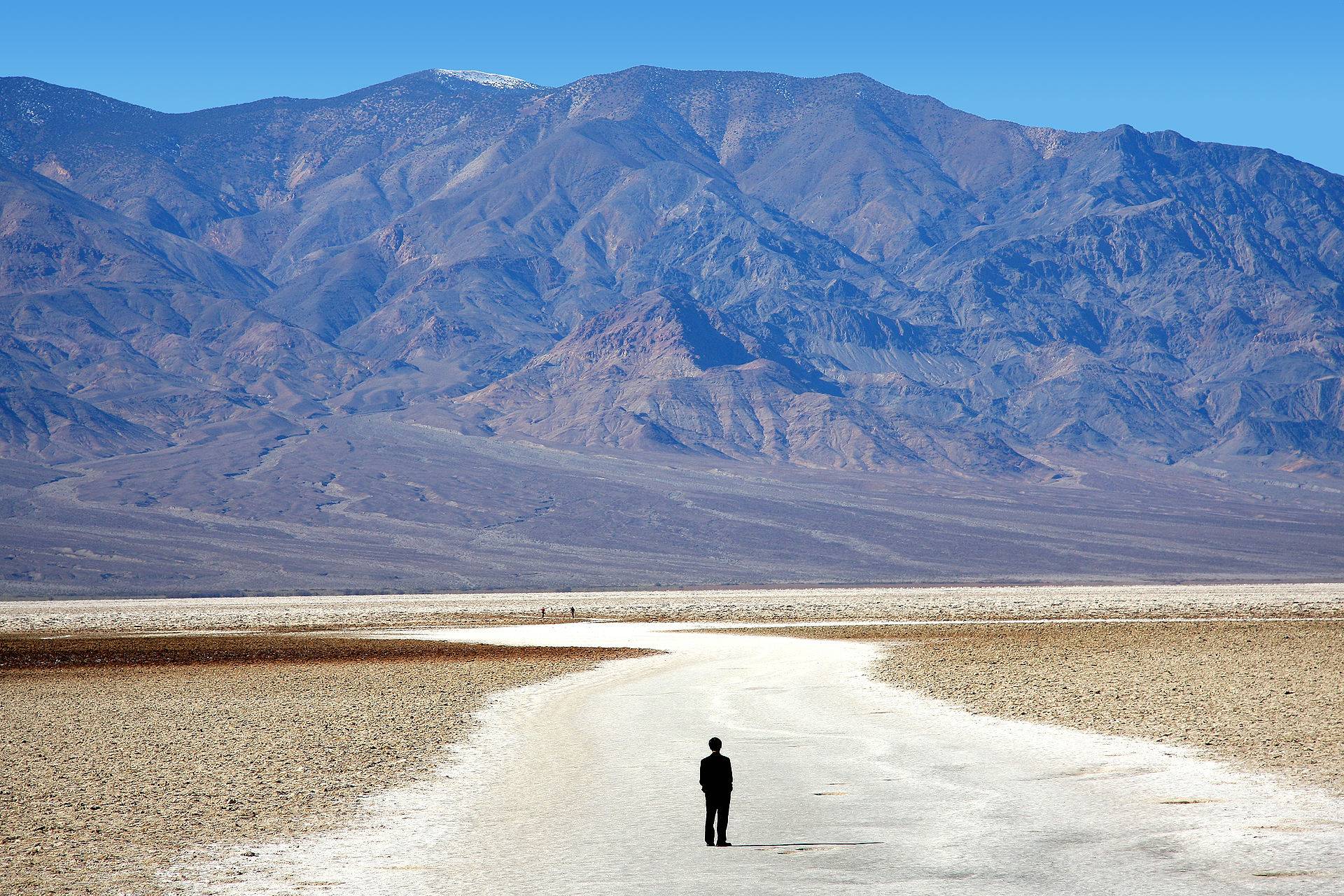 This is a great way to see the eastern half of California, which is even dryer than the infamously dry west half!

There is some romantic imagery here. You can imagine yourself part of the one of the wagon train migrations taking gold prospectors out west seeking fame and fortune.

Death Valley is also hot hot hot, so it could be a great alternative if some of the other destinations are too cold for you. It's also dry dry dry, so take lots of water. Please be careful, don't be like these European tourists!

Not the answer you're looking for? Browse other questions tagged usa motorcycles utah scenic-routes or ask your own question.