PS: this is my first time in the USA.

Visiting the United States often confuses anybody from anywhere else in the world, is their taxation in most states. In the U.S., if there is a "sales tax" on purchasing items, it is not marked as such on the label or menu. The tax normally will be added to the price at the cash register or added on the bill in most states.

At the moment following tax rate applies for hotels and transient accommodations in Washington DC: 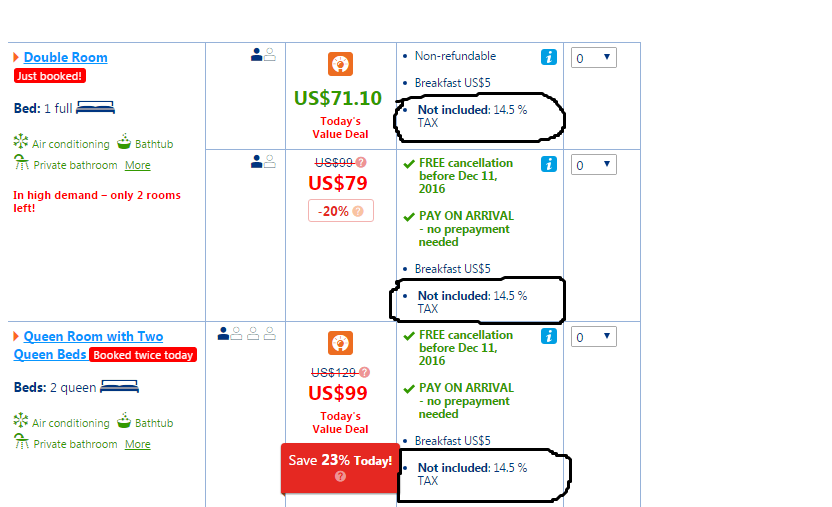 Therefore it is normal to have 14.5% tax on hotels (Washington DC) and it will be very common that tax will not be included and mentioned separately in some hotel booking websites as well. The tax normally will be added to the price when you will check out.

Sales and lodging taxes in the USA can be extremely complicated, as they can be applied by the state, the county, the city and the district. You can find plenty of examples where hotels within the same city, only a couple of blocks part have different tax rates.

Taxes at the local level (country, city, district) are often optional taxes, ie a tax voted in by the people for a specific purpose, such as a 1% sales tax imposed for one year to build new parks. These taxes can and do change, so the tax rate in effect when you book today, might not be the tax rate in effect when you stay at the hotel 8 months from now.

Most hotels publish the room rate by itself with a note that it is exclusive of taxes. Most hotel booking websites take the same approach. One could argue that this is misleading marketing, but it is currently just the way things are done.

Airlines used to take the same approach, showing you just the cheap airfare portion of the price, but regulations changed requiring the full cost (airfare plus the multiplicity of taxes) to be shown. But unlike sales and lodging taxes most airline taxes are federal so not subject to frequent modification. Plus airfare taxes are a major percentage of the final cost versus 5 to 15% of a hotel's final cost.

Not the answer you're looking for? Browse other questions tagged bookings hotels washington-dc taxes booking.com or ask your own question.

6
Pay 16% tax at hotels for tourists?
24
Rebooking same hotel for cheaper price - ethical?
2
Hotel "rebooking" policy: full night's rate?
7
Hotel booking for someone else with my credit card
5
Does a visitor to someone already staying in a hotel have to pay the city tax?
46
Can a hotel cancel a confirmed reservation?
45
Hotel booking: Why is Agoda much cheaper than booking.com?
0
What does it mean when a hotel has "transfer from airport" in booking.com?