Where can I see this Darth Vader church?

Recently, I saw a picture that shows a Darth Vader bust: 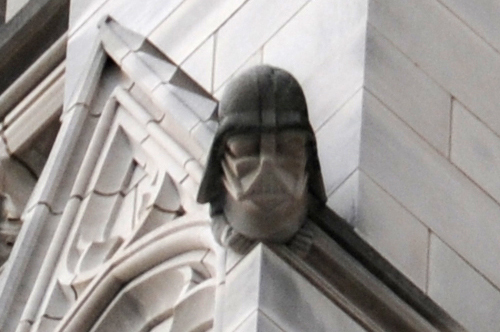 It seems to be a church or something similar. For me it looks like a big fake, but my friend swears that this is not photoshopped. Therefore, I would like to know where I can see this Darth Vader bust in reality. Where do I have to travel to? And what is the story behind this unusual bust?

It's on the northwest tower of the Washington National Cathedral in Washington, DC. There's an informative page about it on the cathedral's website:

You can see it from ground level, but they advise binoculars.

As for why it's there:

Washington National Cathedral held a decorative sculpture competition for children... The third-place winner was Christopher Rader, with his drawing of that fearful villain, Darth Vader.

Amazingly it was a kid's competition that got it there. The Washington National Cathedral in Washington, DC - where Star Wars villain’s sculpted image sits next to a raccoon 200ft up America’s national house of prayer.

A story about it in The Sun.

The Wikipedia article on the Cathedral has more information too:

The Cathedral boasts what is probably the world's only sculpture of Darth Vader on a religious building. During construction of the west towers of the Cathedral, developers decided to hold a competition for children to design decorative sculptures for the Cathedral. The image of the villainous Vader, sculpted by Jay Hall Carpenter and carved by Patrick J. Plunkett, was placed high upon the northwest tower of the Cathedral, fulfilling the role of a traditional grotesque.

Not contradicting the references to the Darth Vader sculpture on The Washington National Cathedral in Washington I would like to direct you to two buildings in Spain.

Sagrada familia is a famous cathedral in Barcelona, Spain. The architect behind it is the late Antoni Gaudi. He is also the architect behind the building Casa Mila. Both buildings are equipped with sculptures/design elements which reminds the spectator about Star Wars storm troopers.

The blog Sistersbailey mentions that George Lucas was inspired by Gaudis Roman guards for his storm troopers. Many other webpages says things like "[..] it is said that George Lucas was inspired[..]", but I have not found a proper reference to this. In an age where Apple can copyright a telephone with rounded edges my guess is that Lucas wouldn't stand a chance in court. 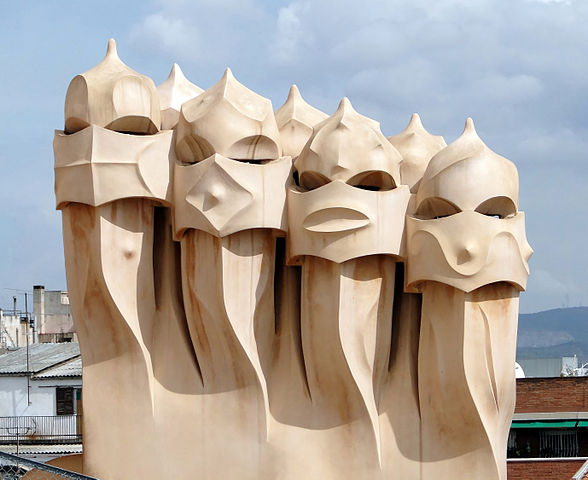 You might also find Nelson Mandela Metropolitan University interesting. I went there around 10 years ago and the architecture took me on a Star Wars ride. I would not have been a tad surprised if a storm-trooper suddenly came walking across campus.

Not the answer you're looking for? Browse other questions tagged where-on-earth identify-this architecture religion or ask your own question.