I saw Miles & More: What is a booking class?. While with my Qatar Airways experience I came to know that there are various sub-classes even within Qatar Airways and there isn't/wasn't any list which told which tickets are of which sub-class and what that entails. I'm talking about long-haul flights. I do understand that various airlines might view things differently but still it would be nice if there are some generic definitions that can be known.

a. Basic Economy - This is apparently a new class which has even more limitations than an Economy class.

b. Economy Class - This is what I flew , roughly 30kgs baggage allowance, between 16.5 to 18" seat of width and roughly 31 inches of seat pitch . Apparently there are number of sub-classes here by most airlines but what those are is unknown. Apparently some allow to pre-select your meals as well as seats while others do not. Qatar did.

d. Business Class - Again a step up from from Super Economy class. Could be recliner seats to full-flat beds to suites (don't know what the term means). Amenity kits, toiletries, don't know what kind of food is served.

While seatguru does give some details of the kind of seating that most airlines offer (see comparison charts) they don't give the whole deal/scene. I'm not looking for specific airlines but to have a more generic outline of the possibilities.

First, it's important to clarify some terminology. The "booking class" or "fare class" (the first letter of the fare basis code) describes the category of fare you have purchased, while the "cabin class" describes the physical section of the plane where you will sit and the services offered. The two are related, but not always the same. You typically purchase the cheapest fare class currently available for the cabin class you want. The fare class determines the price you pay (and sometimes the number of frequent flyer miles you earn), while the cabin class determines where you sit.

What you are describing are cabin classes. Different such classes offer different types of seats, on-board services, baggage allowances, and other perks. The exact differences will vary greatly from airline to airline and even from aircraft to aircraft operated by one airline. For example, an Emirates A380 will offer a bar/lounge area and lie-flat seats for business class passengers and a shower for first class passengers, while those in premium cabins on an Emirates Boeing 777 will somehow have to make do with no bar, angle-flat seats, and no on-board shower (and on some Emirates 777s, no first class at all).

So, it's difficult to give precise definitions for each cabin class because they vary so widely. It's necessary to research the services offered on the airline's website and consult review sites (or ask a question here if you can't figure it out) to know exactly what you're buying. Every airline website will have pages that show the classes of service offered and their features. If you purchase your ticket directly on the airline's website (as opposed to a third-party ticketing site), it's common for there to be a display showing all the options for a particular ticket. It's also important to be careful, as airlines may have both old and new styles of seats in their fleets as they roll out new designs. A google search for "[Airline Name] first class/business class" will usually produce information and reviews, even YouTube videos of someone filming their flight experience. However, in broad terms:

Basic Economy - This is generally a fare class (or collection of fare classes) and not a cabin class. The actual seat is still the same as an economy seat, but you may face greater restrictions on luggage and seat selection, have to board last, earn fewer frequent flyer miles, and otherwise endure whatever pain the airline has come up with to save a few dollars. These are most common with low-cost-carriers, and it is important to research exactly what is and isn't included, as you may find yourself spending far more in additional fees than you saved buying the cheaper ticket. 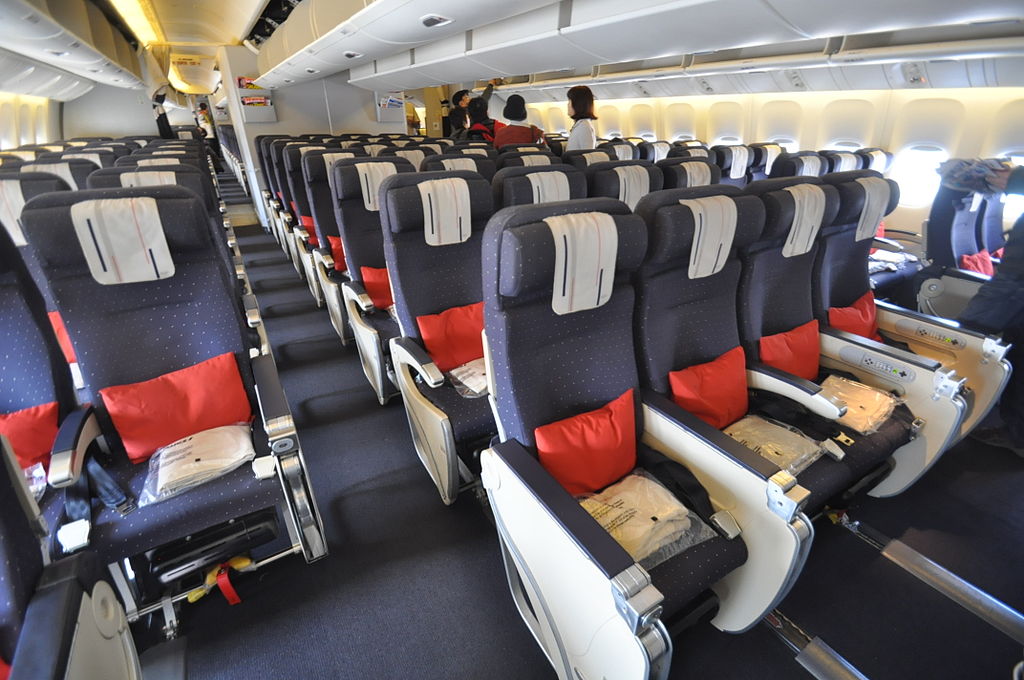 Seats are generally 17-18" in width with a pitch of roughly 30", though this varies depending on the airline and aircraft. May include meal service depending on the the airline and route. Depending on the airline's policy (and sometimes how expensive your fare was), seat selection may or may not be available in advance. Some seats (bulkhead rows, exit rows, etc...) may be reserved for frequent flyers or available at an additional charge. A pillow and blanket may be provided on long-haul flights (again, this is airline specific). Many, but not all, airlines may offer in-flight entertainment (IFE) using screens in the seats, and there may be power plugs to charge gadgets beneath the seats. 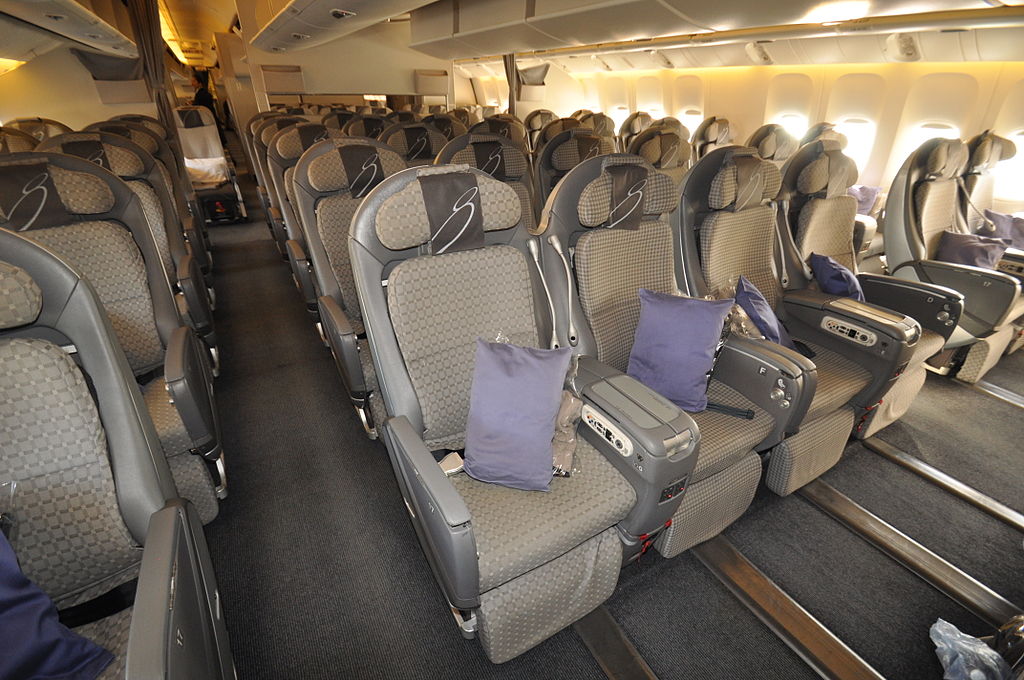 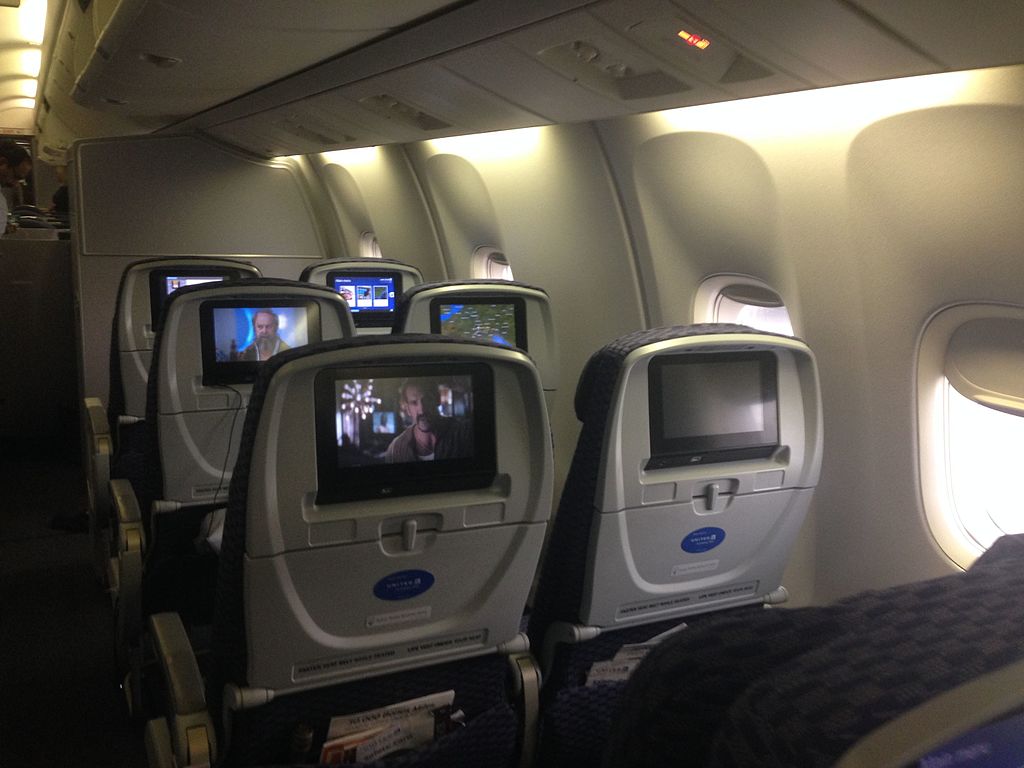 There's a great deal of variation here; the only constant is that you're getting something that is somewhat better than economy. Some airlines simply offer economy seats with several inches additional legroom, while others offer wider recliner seats with footrests and other amenities. In some cases, Premium Economy is sold as its own cabin, with its own fare class and everything. In other cases, Premium Economy is just a bunch of economy seats that the airline will only let you select if you've paid extra (or in some cases, have frequent flyer status with the airline). 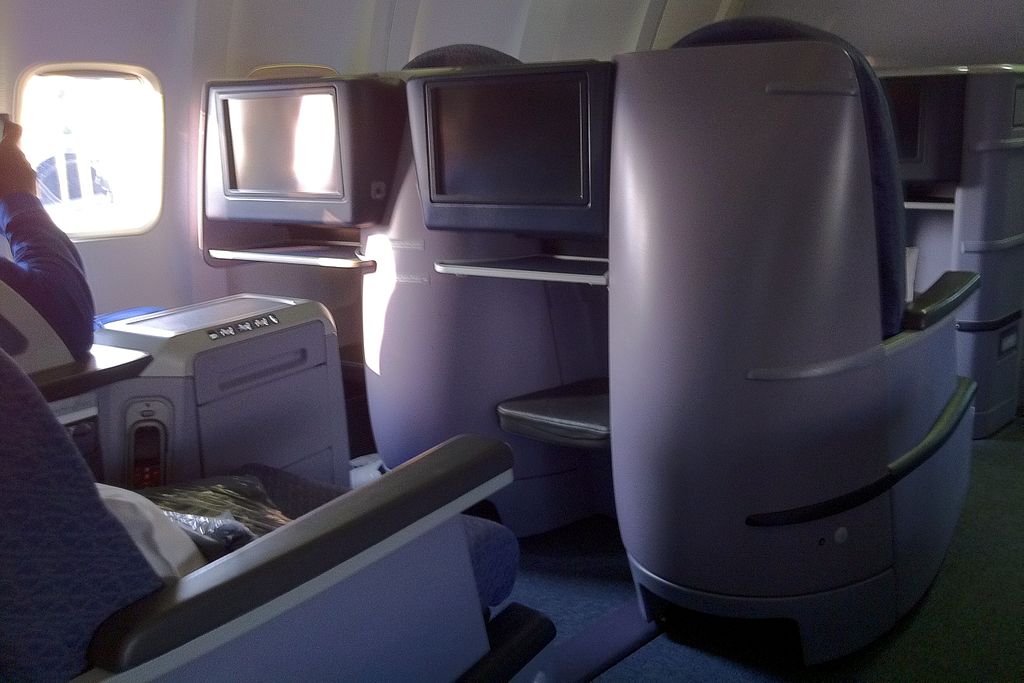 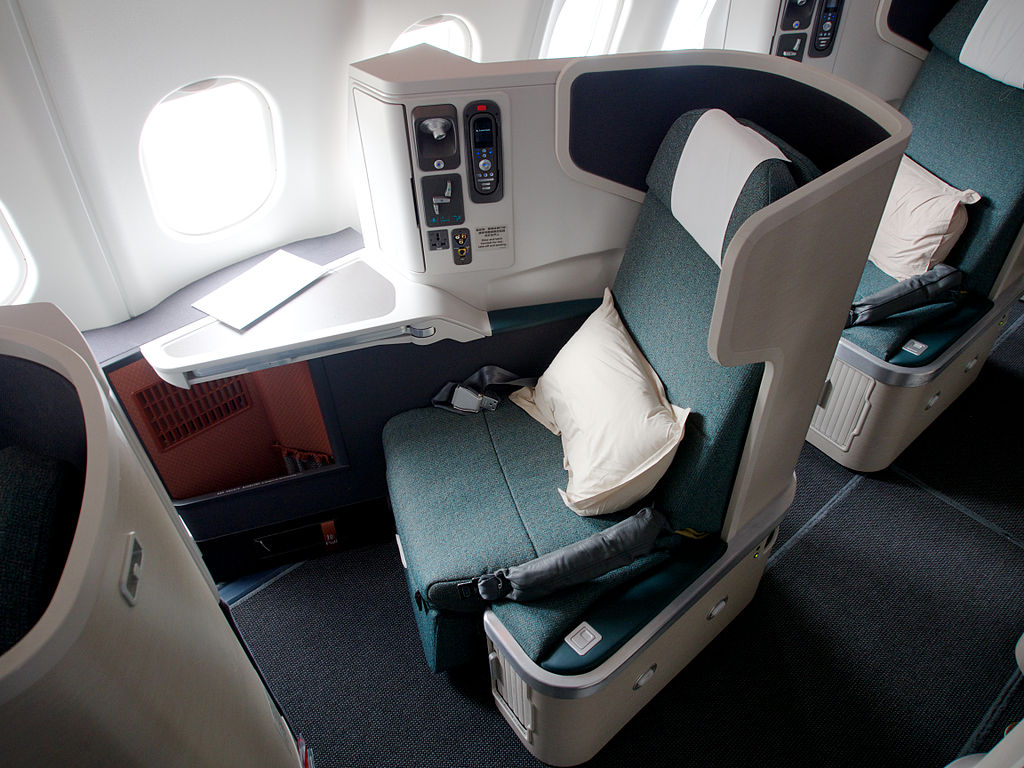 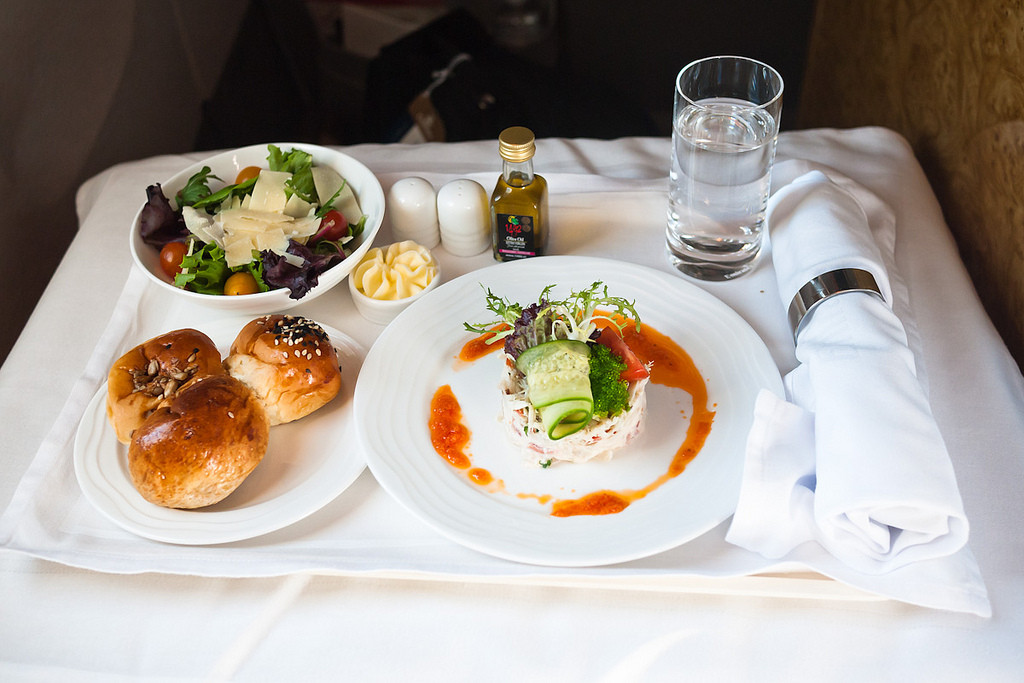 For long-haul flights, the standard in Business Class now is often lie-flat (or angle-flat, which don't get to a full 180º) seats, but there are many seat designs on the market, including those that are still only recliner-style. It's common for the seat to be about 20-22" wide with a 60"+ pitch. The seat often has motors and can be adjusted to many positions for eating, working, relaxing, and sleeping.

Typical amenities besides the seat include premium meal service with a range of included premium alcoholic beverages, a separate cabin with dedicated crew for more attentive service, increased baggage allowance, lounge access at the airport (where available), snacks and treats, power and/or USB chargers at your seat, and an amenity kit (generally things like a toothbrush, comb, sleep mask, and earplugs). The meal is often multiple courses, with selections available from a menu, and sometimes may be customized to your liking by the crew (choice of salad dressing, ice cream toppings, etc...). Some airlines may offer additional amenities such as: an on-board lounge/bar area, padding for your seat to convert it to a bed, pajamas, complementary chauffeur service to/from the airport, on-board espresso service, and noise cancelling headphones.

Some Business Class cabins offer direct-aisle access, where every seat has immediate access to the aisle. Others do not, which may make it difficult to get in and out (especially when your seatmate is sleeping). Some Business Class cabin designs do include middle seats. Many modern seat designs use a hard shell, which ensures that you receive the same amount of space whether or not passengers around you recline their seats.

Note that this type of service generally only applies to long-haul flights. For flights within Europe, Business Class, where it is offered, is often just an economy seat with the middle seat blocked off to give you more room, sometimes with a meal or drink thrown in. For flights within North America, the premium cabin is typically called First Class, but the product is different, typically recliner seats (though some airlines offer lie-flat seats on select transcontinental routes). A number of airlines have made some variation of Business Class (sometimes branded something like BusinessFirst or Executive Class) their top offering. 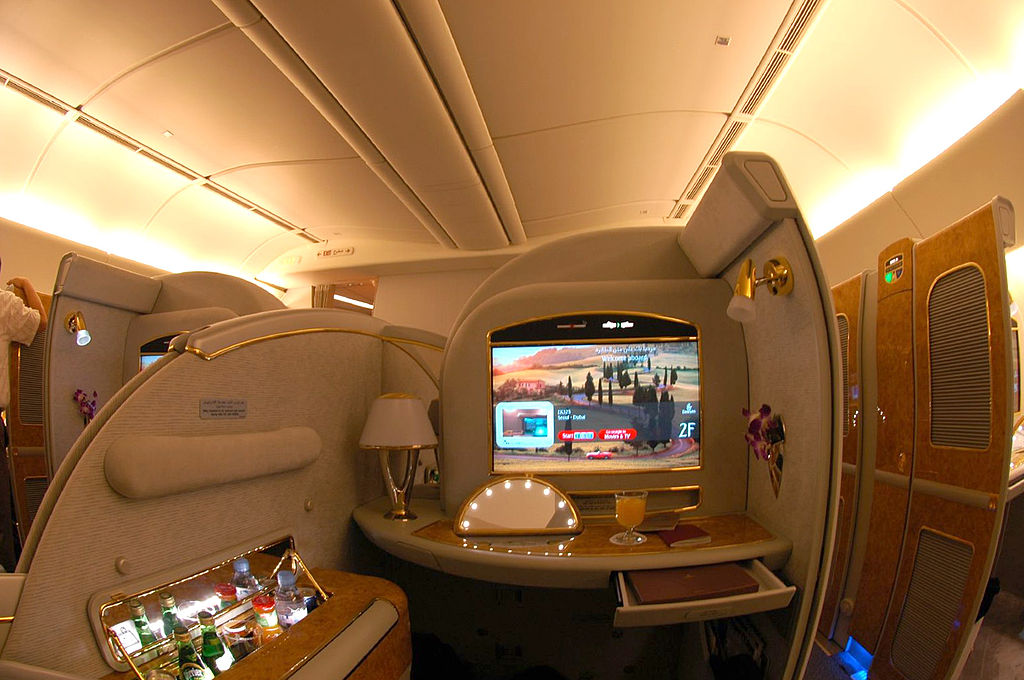 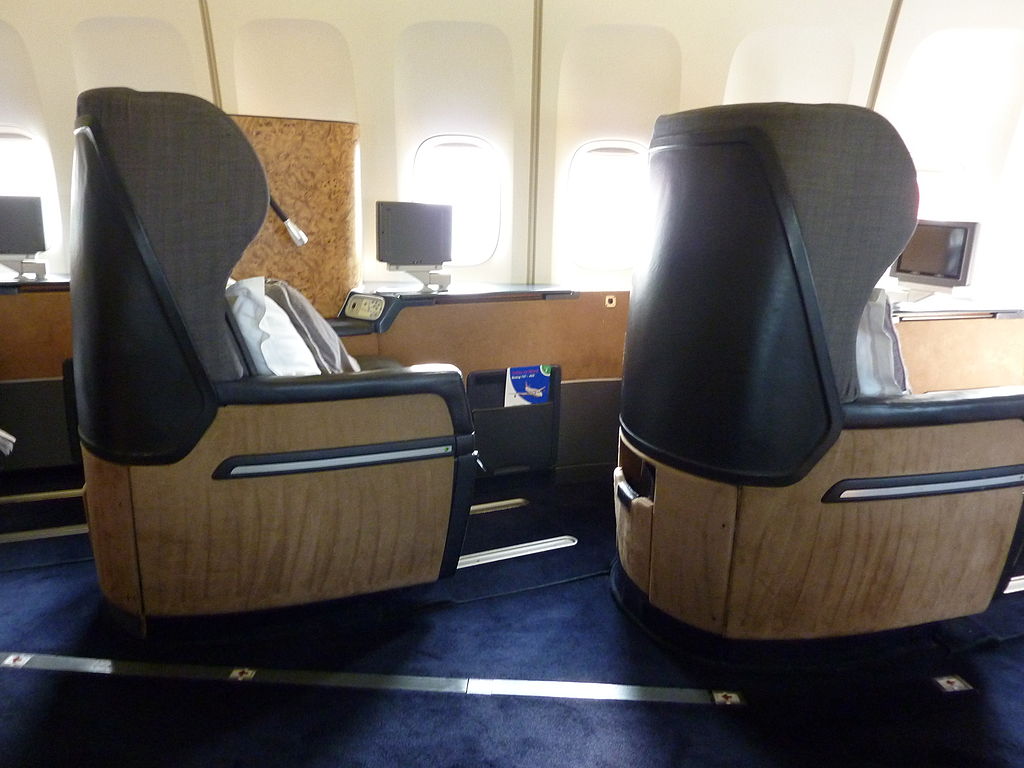 The best the airline has to offer. Not all airlines offer First Class service, and it may not be available on all aircraft and routes. The seat is larger and more comfortable, sometimes taking the form of a semi-enclosed suite (see the Emirates picture above) with a door for privacy, and direct aisle access is the norm. Comfortable bedding is provided when you wish to sleep. An even more premium meal service is generally offered, with a larger number of choices available on the menu across many courses, and expensive foods like caviar and top-shelf wines and liquors. At some airports, the airline may have a special lounge to cater exclusively to First Class passengers, with yet more food and drinks. This link shows a variety of some of the best First Class cabins to give you an idea what's out there.

Some airlines offer additional special amenities in First Class. They may include things like: complementary spa services at the airport lounge, concierge service, on-board shower, a separate bed next to your seat, an on-board chef capable of handling many special requests, seats you can combine with your seatmate to make a double bed, and an on-board butler.

Not the answer you're looking for? Browse other questions tagged air-travel terminology aircraft seating luxury or ask your own question.

11
Miles & More: What is a booking class?
8
Online resources for airplane seat sizes
8
Are there subcategories of seats even within economy class?
4
Anyone tried Singapore airlines Premium Economy class ? How is it different from economy class?
1
Difference between Airbus and Boeing planes, width for economy seats
19
Airplane Seat Recline Measurement... in units of length inches?
0
Seat selection on british airways 787 flight
5
Business class vs premium economy
42
Can you sneak into Premium Economy Class?
6
How does Google Flights define classes?