Roughly how long does the Pamir Highway take to do?

I'm heading into Tajikistan on Friday (to Dushanbe). I aim to go around to Khorog and then via the Pamir highway to Kyrgyzstan. I'm unsure as to how long to allow for this part of the trip, or how to go about doing it. I assume I'll run into more information as I hit the country, but in the meantime I hoped someone on here would have more info.

I have applied for the required permit, and have a 30 day visa for both countries. However, I'm a bit behind schedule so would like to be quick, but don't want to rush it either.

Does anyone have some estimates on the minimum length of time required for a single traveler?

(I'm claiming this isn't ambiguous as I'm after the minimum, rather than some flaky 'how long does it take' - some could happily take 6 months to do it!)

I've done the Pamir Highway in the summer of 2014. It's hard to answer the question how long it takes because it's not a road for getting from A to B but it's an experience in itself and you may want to spend as long as you can up there.

There are several points to think about before heading out:

Which route? do you want to take, there are several options from Khorog, you can go south along the Afghan border to the Wakhan valley and then turn north to join the M41. You can go north via the Bartang River or along the Shokh Dara valley. The most direct route is to leave Khorog on the M41 and stay on it all the way to Osh in Kyrgyzstan. I think all of them are worth taking, you could do the Southern loop and come back to Khorog and then do the M41. 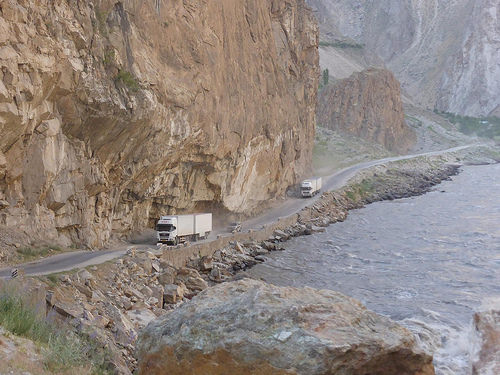 How to travel?, the easiest way is to hire a jeep with a driver. This will be expensive, if you can find other people to form a group, it may be affordable, I was originally planning to do this, but never found more than one other person to join me.

Using shared taxis (usually SUVs, but also old Opels) only gets you so far. You can get from Khorog to Ishkashim, or Murgab to Sary Tash, but you have to be very lucky to find them in the remote areas of the Pamirs, there are just not enough people travelling there.

You can try to hitch, usually all cars and mini-buses still charge you something. On the M41 between Khorog and Murgab there are a few trucks every hour going to China. I hitched with several of them and they never wanted money. But in the Wakhan valley and between Murgab and Kyrgyzstan there are no trucks and very few cars. I remember one morning waiting at the side of the road not seeing a car for four hours either way.

And finally you can cycle or walk. I started walking early in the morning and by 11 am when it got really hot I started hitching until I reached the next place with a homestay. 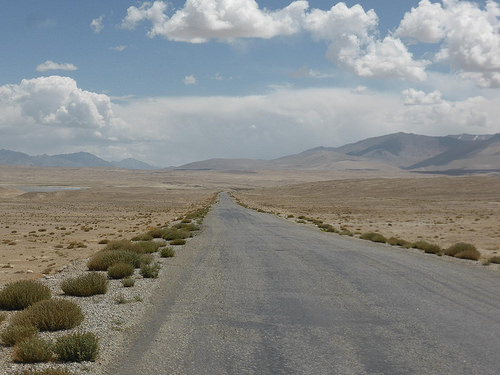 How often to stop? Besides Khorog only Murgab has one hotel. There are basic guest houses in Eshkashim and Jelandy, but otherwise it's all homestays and there are not so many villages on the way. The tourist office in Khorog has a list of homestays, but I never used it. Whenever I got to a village it was easy to find a family that would take me in. There are many places to stop and do side trips on the way. Lots of hiking opportunities. 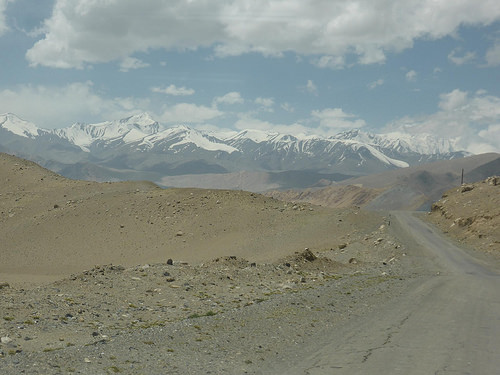 I spent 17 days in the Pamir region, not long enough. If you have a hired jeep you can make it in two or three days from Khorog to Osh, but then you wouldn't stop much.

Pamir highway is more than 700 kilometers long, and contains some mountain crosses over 4000 meters AMSL. This trip will be very difficult for you, and I wish you good luck with that.
According this article, you should know this:

Thats all I know, sogood luck with that :)

Not the answer you're looking for? Browse other questions tagged guides extreme-tourism tajikistan kyrgyzstan pamir-highway or ask your own question.

22
Can I get warfarin in Tajikistan (or nearby?)

43
How can I find a guide who will take me safely through the Amazon jungle?
13
How can I find a guide that will take me safely up Mount Kilimanjaro and Mount Elbrus?
20
Can anyone recommend a good trekking tour for Machu Picchu?
7
Dushanbe to Bishkek overland - options?
9
Is the Pamir highway passable in early October?
4
Antelope Canyon - Do I need to purchase a tour? How to avoid crowds and take good pictures in Antelope Canyon?
6
(How) Can I hire an instructor as a tourist driver on the Nürburgring without renting a car?