Unmarked T/Y intersection. Where do I turn left?

I regularly turn left at an intersection (Google satellite view) that I'd best describe as a T but the stem of the T splits around the stop sign: 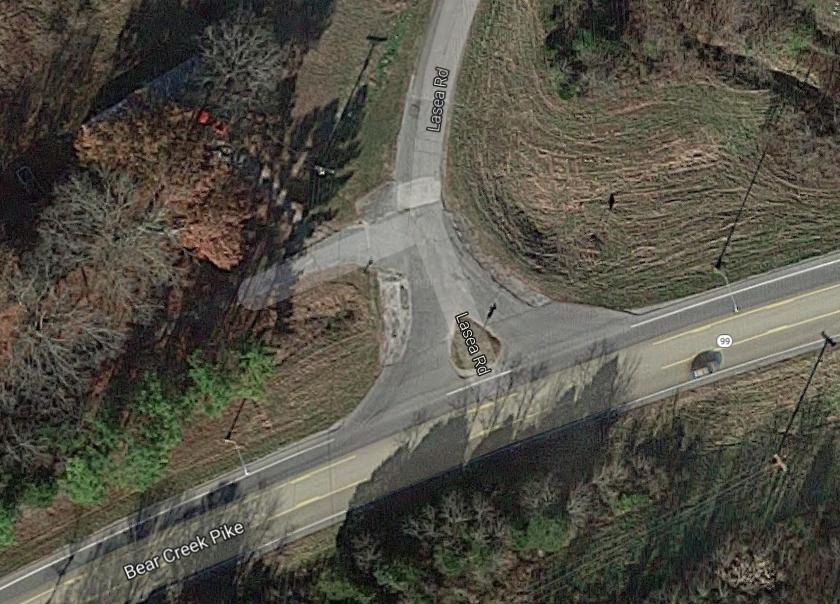 I assume this is designed to allow the oncoming traffic to maintain speed when turning North.

Where should I be when heading South to turn (I'm on Lasea Road wanting to turn left onto Bear Creek Pike)?

Due to lack of markings I generally keep right and treat the left side as a single lane flowing in the opposite direction. There is always the inevitable person who comes up and takes the left side. When the far traffic clears for me first I pull out and every time they try to run me off the road once they take off.

(Sure, as with any traffic regulation, if there's nobody around you might turn left, but IMO the implication is you should only turn right.)

Regarding the people in (1) who are actually driving on the wrong side of the road, into traffic for goodness sake - what can you do? Give them a wide berth.

Google shows that the Stop Sign is "indeterminately" placed sort of in the middle of the lane division.

My interpretation coming to this would be:

"The stop sign is badly placed: bad sign placement does happen. You have to deal with it."

Here's an example of the identical situation, but normally marked....

So for me, Lasea is the same as this (fully marked / concreted) WalMart exit: (a) it's ("of course") a road division so keep right; (b) you should really only turn right on to the main road.

Regarding the bizarre stop sign, I'd treat it as a case of "Sometimes signs are strangely placed; that's part of driving."

(For me: the fact that the signage is flakey: I'd go out of my way to stick to the rules even more so - you know?)

BTW I often think when driving ..... this sort of issue will be a real challenge for the "driverless cars" that are coming!

Not the answer you're looking for? Browse other questions tagged usa driving or ask your own question.

31
What's the name for the "blocking" stickers used on car headlights?
15
Right turn signal in Pennsylvania - can I turn on red?
3
In what states is the left lane only for passing?
4
Stopping at a red light for a right turn in Massachusetts
8
How to safely turn right in Thailand
32
Rules for this road junction in Germany
7
Left/right right of turn on an intersection in USA