Getting from Bosnia to Kosovo

What are the best options for getting from Bosnia & Herzegovina to Kosovo? I suppose there are two interwoven parts to this: 1) border crossing possibilities and 2) transport options. 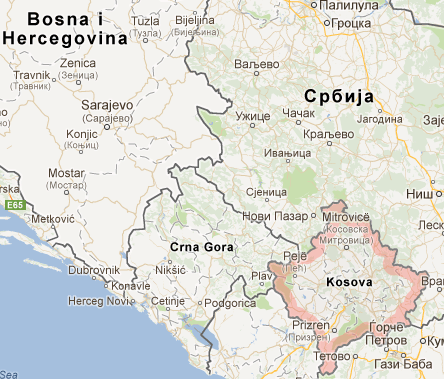 1) Can you cross without problems from Bosnia to Montenegro, and from Montenegro to Kosovo? If you can, where are the border crossings? (If Montenegro-Kosovo border is not open, I suppose going through northern Albania would work fine?)

NB: to my understanding, going to Kosovo through Serbia would not be feasible (unless you only want to visit the Serb-majority northern parts of Kosovo, but I'm thinking Pristina & the Albanian-majority areas). My understanding was wrong; more info on the Serbia-Kosovo border issue.

2) Transportation-wise, what's the easiest way to get to Kosovo from, say, Sarajevo or Mostar? I'm guessing there are few to none international bus routes… But which Montenegrin town should I aim for best connections towards Kosovo? Once over the border in Kosovo, how are the options for continuing to Pristina?

Any form of public transport is ok (including flying if that's the easiest way). Of course, I'm especially interested in hearing about first-hand experiences. Also, feel free to correct if any of my assumptions above were wrong. Background: I've been to (coastal) Montenegro before; moving around there with buses was easy. Bosnia & Kosovo are new to me.

1) You should have no problems crossing from Bosnia and Hercegovina to Montenegro and on into Kosovo. The only proplematic part is the Serbian-Kosovo border. It seems the best way to travel to/from Serbia is to use your EU identity card, rather than your passport because they can not stamp it.

2) There is a direct bus from Sarajevo to Pristina, from Wikitravel:

There is a bus every day to Pristina in Kosovo at 22:00 from the main bus station. The bus is listed on the station schedule as traveling to Novi Pazar, Serbia. From there it travels on to Pristina.

So this goes through Serbia, but that shouldn't be a problem. Even if you travel on into Serbia proper and then on into a third country, you do have your Serbian entry stamp. As far as I understand the problematic bit is to enter Kosovo by plane or from the south then moving into Serbia without getting a stamp, and then trying to leave Serbia without having an entry stamp for it.

Anyways, personally I don't recommend that bus because it goes at night, at least some of the area is really beautiful and if you have enough time, travel by day.

There is at least one morning bus from Sarajevo (Lukavica bus station, a bit out of town but reachable by public bus) to Podgorica in Montenegro. There is not that much to see there but there is a decent hostel close to the bus/train station. From there you can take a bus to Rozaje and on to Peja in Kosovo, this is a Montenegro/Kosovo crossing. Within Kosovo there are many buses to Pristina.

Even though there are some information about buses online, like Autobusni-Kolodvor, they don't list all connections especially not the ones crossing borders.

Looking at a map can be misleading, buses on the Balkans usually take much longer than expected by a Western/Northern European. Also in winter certain buses may not run because of closed roads.

If you have enough time, go along the Montenegrin coast into Northern Albania and cross into Kosovo at Vrbnica, lost of things to see on the way.

I can at least partly answer your question by quoting from my Lonely planet:

It's unwise to bring Serbian-plated cars into Kosovo.

Because Serbia doesn't consider Kosovo's entry and exit points to be official international borders, attempts to enter Serbia from Kosovo may be futile unless you initially entered Kosovo from Serbia.

Not the answer you're looking for? Browse other questions tagged transportation borders bosnia montenegro kosovo or ask your own question.

1
Traveling to Northern Kosovo (e.g. Zubin Potok)
27
Are there any problems crossing Kosovo's international borders or having their stamp in your passport?

27
Are there any problems crossing Kosovo's international borders or having their stamp in your passport?
6
Getting from Mumbai to Hospet
5
Serbia - Kosovo border problem?
11
Foreign car insurance for Kosovo?
2
Are there border checks on the Kosovo-Serbia (Mitrovica-Kraljevo) train?
5
Is laziness about stamping passports common at the Bosnian-Montenegrin, Montenegrin-Albanian and Macedonian-Kosovan land borders?
2
Rent car Green Card in Dubrovnik (Croatia)
6
Updated Border Crossing Status Between Kosovo and Serbia