I'm an Indonesian citizen and traveling with family to Japan next month. My flight will transit in Seoul for a day.

Do I need visa for 1 day/night stop over ? How many hour max I can stay in Seoul during stop over ? Or should I apply visa ?

Yes, Indonesian citizens (ordinary passport) require a visa to enter Korea for stopover for 1 day/night. Transit without of visa (twov) is possible for Indonesian citizens provided they remain in Seoul airport within 24 hours for next flight, however they will not be allowed to leave the airport area. However there is still a possiblity to leave the transit area with Transit Tourism if approved br Korean Immigration

Transit Tourism Program: Holders of onward tickets transiting Seoul Incheon (ICN), participating in the Transit Tourism Program for a max.transit time of 72 hours leaving the transit area is permitted, provided staying in Seoul, Incheon or Gyeonggi Province and leaving the tour group is not permitted. Transit tour eligiblity is only possible after Korean Immigration approval, it is possible that any non-visa transit tour passenger(s) may not be allowed to enter Korea if any problem occurs in the course of the Korea's immigration inspection. Detail about Transit Tour reservation Transit Tour reservation

Exemptions: Except for Passengers with a visa issued by Australia, Canada, New Zealand or USA to nationals of Indonesia can avail visa free facility at Seoul (Korea) 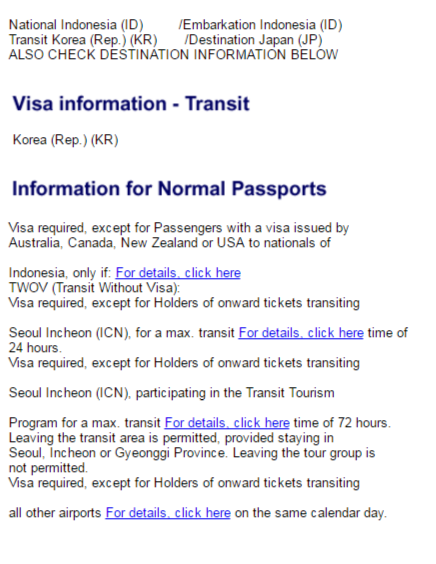 Visa Free Enrty : Diplomatic and official passport issued by indonesia can avail visa free entry to Korea for 30 days only. 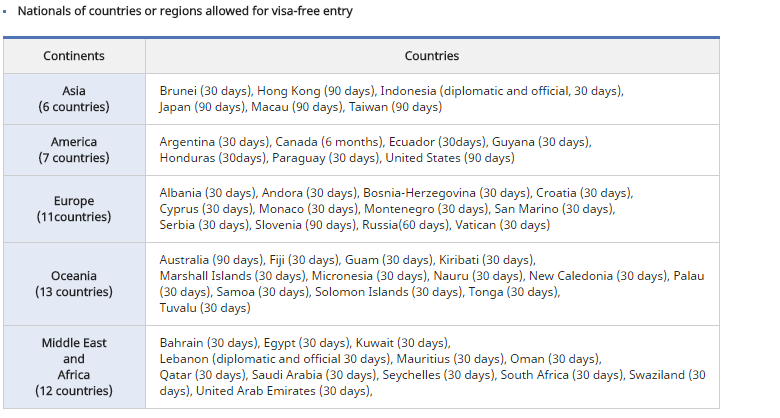 Not the answer you're looking for? Browse other questions tagged visas transit south-korea indonesian-citizens or ask your own question.

1
Does an Indonesian need a visa for a long layover in Korea?

0
Visa for transit in Seoul
8
Do I need a visa to transit through South Korea?
3
Transit Visa required for US citizens going from Japan to Korea?
2
Can I leave ICN airport on an 8-hour layover? Indonesian citizen, US Green Card
2
Transit visa for South Korea as a Pakistani citizen?
2
UK Standard Visitor Visa for Indonesian citizen
2
MINIMUM STAY As a transit passenger
2
Transit Visa / Stopover in Istanbul
5
Do I need Korean transit visa