I've come across this situation in the past and I'm not sure if I've misunderstood or if it is a real limitation of online booking sites run by airlines.

I'm going to use an example of travelling from London (in the UK) to Wellington (in New Zealand) but it is (I think) a more general situation than that.

So in order to get from London to Wellington ...

Another possibility is to book a ticket with Air New Zealand who will fly London to Auckland and then you change planes to get to get to WLG on another ANZ flight but all on one ticket .

In the days before internet booking you'd go to a travel agent. They would produce one ticket booklet which included legs from London to Wellington and which all the carriers involved considered a single ticket. As a result if there was some disruption in earlier legs the carriers doing the later legs would just take it on the chin and sort it out for you .

So is this an intrinsic restriction on using airlines internet booking ? If so is the answer to simply 'use a travel agent' ?

EDIT: In the first version of this question I had used an example which, it turned out, didn't illustrate the problem I was trying to describe so I have now changed that. Sorry for the confusion.

EDIT2: Just to make clear what I want to do as some commenters have asked. I'm looking to :

As some have pointed out I can buy a single ticket with ANZ and achieve this aim but I want a greater choice of airlines. Some have also pointed out that this is possible with some airlines (such as Emirates) and I had overlooked that so that is useful information - thank you.

Although I mentioned paper tickets that is not my interest, I was just contrasting the situation pre-airline-websites and today.

There is no intrinsic reason airlines couldn't issue tickets with interlined segments through their own online sales channels. They (most or all of them) just make a business decision not to do it, except sometimes for selected intra-alliance connections.

Their reasons are probably a combination of the added cost of implementing a more complex itinerary-creation user interface without sacrificing usability for the majority of their online customers, and marketing considerations (now we have this customer's attention we're not going to confuse him by showing flights from our competitors).

The aditional income they could get from doing so would probably be limited anyway -- most travelers who need complex itineraries will be business travelers who already use travel agents for other reasons.

So yes, the answer is still to go to a travel agent (possibly an online one -- they exist), or a manned ticket counter (which may technically just be an airline-branded travel agency anyway), or perhaps even phone the airline. In either of these cases you can expect to be charged a fee to have a human handle your ticketing; it's just not cost-effective to develop an automated system that can deal with all of the corner cases of complex itineraries correctly and still be easy enough to be useful as self-service.

The point I was trying to make with the Kayak link (which seems to have changed since I posted it) is that it does seem possible to buy a single ticket so that I don't have to worry about leg 1 being delayed and so missing the flight on leg 2 even when the "primary" ticket is with Malaysia Airlines and the origin is London and destination Wellington:

Kayak will find the above when only "Multiple Airlines" is the filter.

If you are interested in being a bit more advanced, consider using the Matrix to price your itineraries: http://matrix.itasoftware.com

It shows you the full power of what can be accomplished with air tickets, and validates all fare compatability concerns, interline restrictions and so on. You can also instruct it to only permit certain routes through a simple command syntax it accepts via the “Advanced routing codes” option.

The itineraries it produces are what can be booked as “one ticket” (by a competent travel agent or airline).

However you are often stuck talking to a real, offline person (at the airline or a travel agent) to book the ticket, especially once you get more than three or four carriers involved. However, there are browser plug ins and there's http://www.bookwithmatrix.com that can reproduce some itineraries on online travel agents such as Expedia. (I have not used these.)

Out of interest I wondered if I could price your desired routing to WLG. Indeed Malaysian Airlines does publish a through-fare on London to Wellington, they just don't sell it through their own website. As pnuts says in his answer, Kayak can arrange it. 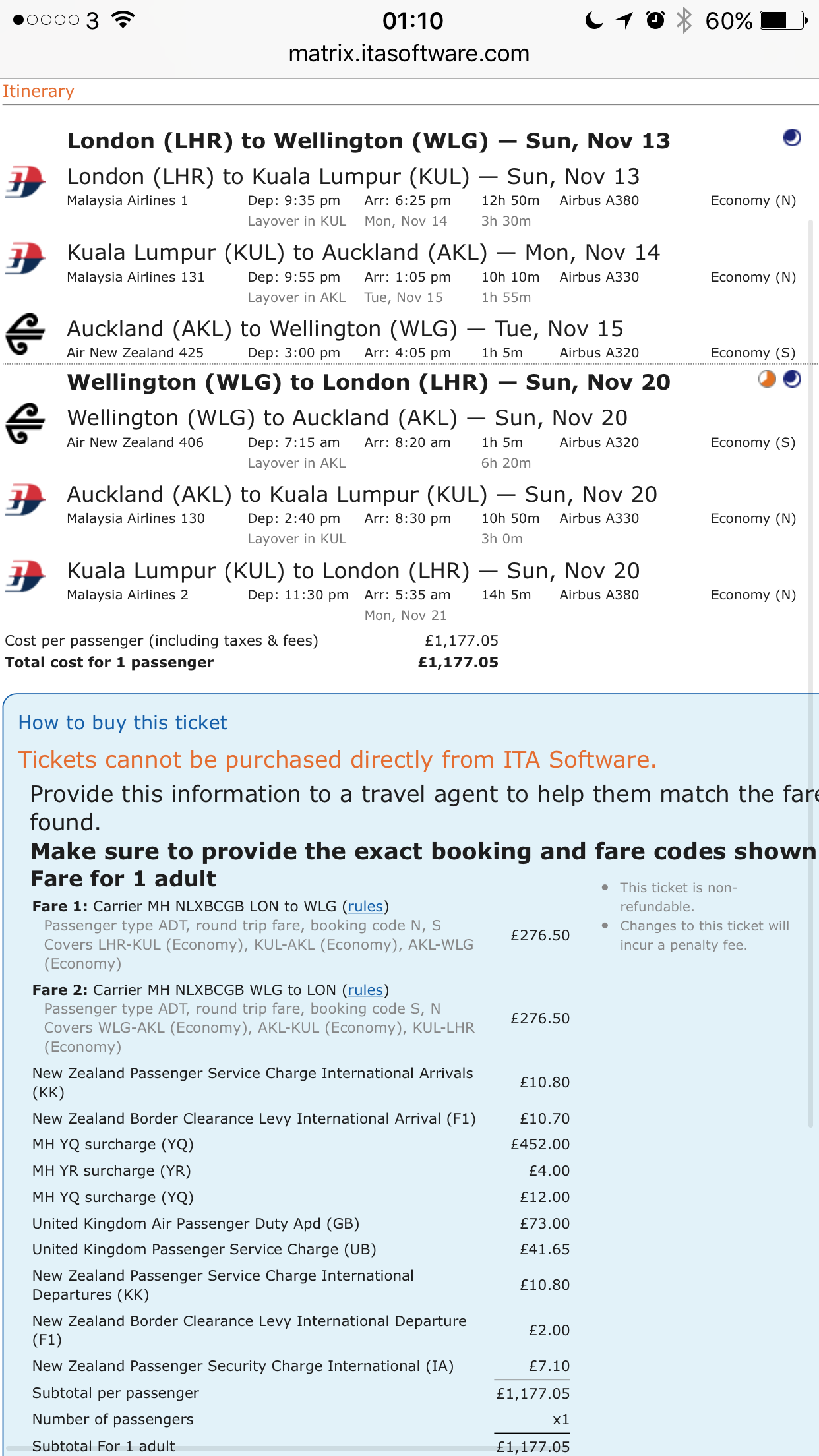 Not the answer you're looking for? Browse other questions tagged air-travel tickets international-travel bookings or ask your own question.

54
Why would a company want me to book a flight via a travel agent if it is more expensive?
13
What are the pros/cons of booking a flight via the primary carrier airline vs. booking the same flight via a partner airline?

16
Knock-on of different airline flight being cancelled on same booking
4
Will airlines object to me booking separate "legs" of the same journey individually?
24
Pricing and booking mixed-class fares, with economy & premium economy combined?
3
Return date earlier than Departure date on the same flight booking
60
What commercial flight route requires the most (minimum possible) stops/layovers from A to B?
7
Can I buy a complicated flight ticket online?
2
Are there alternatives for booking flights unavailable directly via the airline (but available from an Online Travel Agent?)
1
Asiana + Air New Zealand codeshare flight