Which lane to enter on this roundabout? (UK) 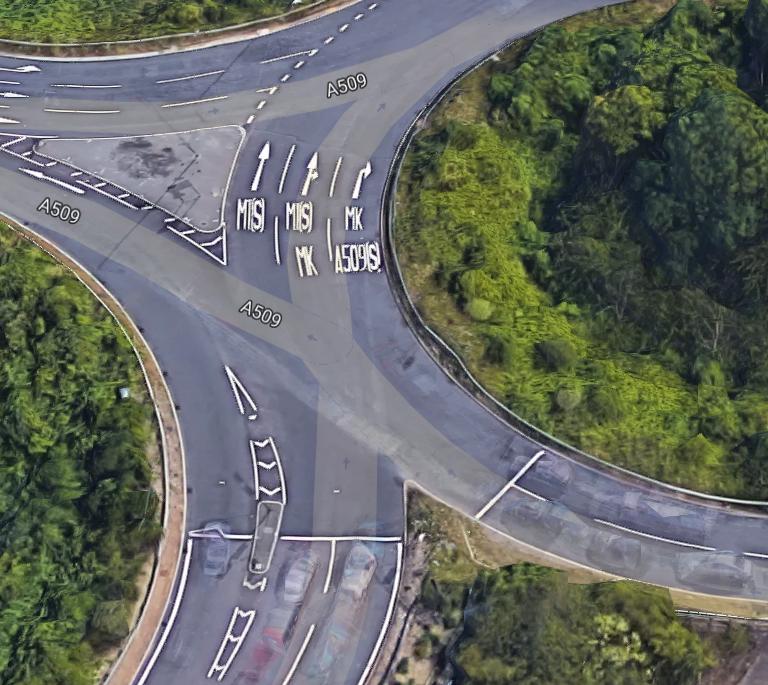 I have added 2 images showing the roundabout. There are two lanes on the approach to the roundabout, which lane does each one go into? So for example, if I was in the left lane, which of the 3 lanes do I enter? Do I enter the far left or the center? 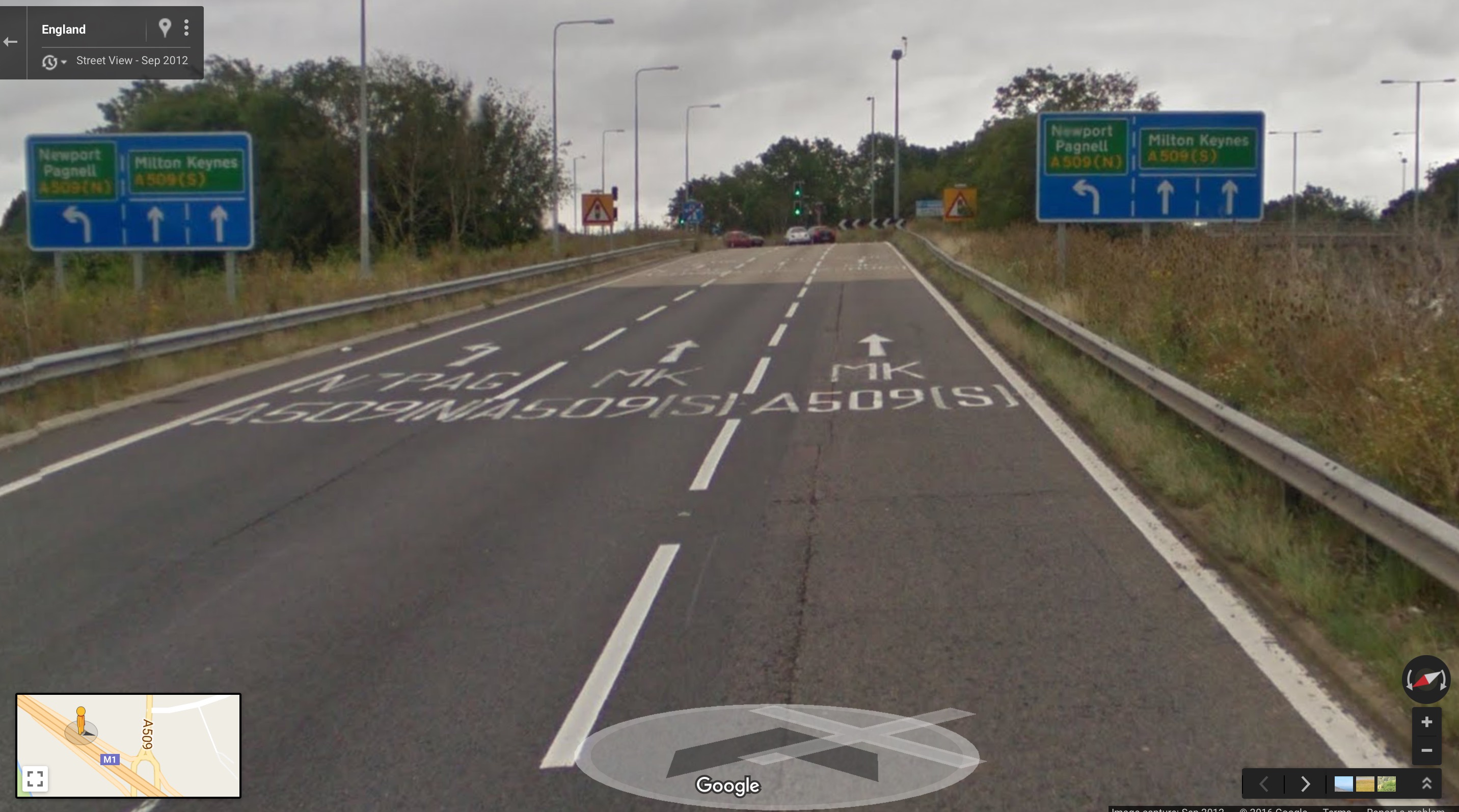 Edit: I found some higher-res satellite imagery, so added image with lanes coloured to indicate what I said above, a bit clearer. 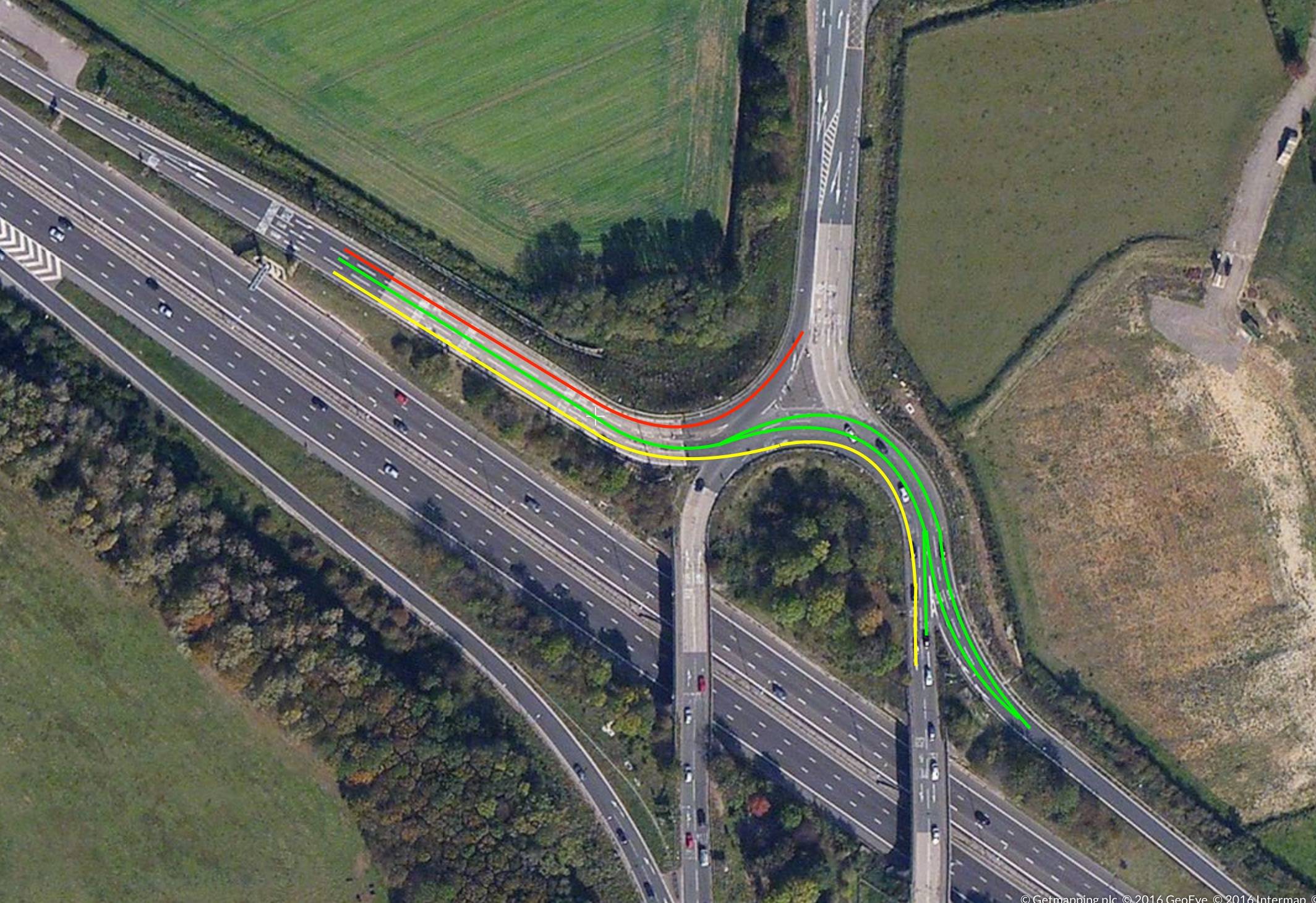 Which lane you should be in at any point depends on where you want to go to, not where you've come from. Where there is more than one lane for your destination, be in the left-most of them unless it's already full (and you intend to pass the vehicles in it) in which case you can use the next one along.

Left-most lane (separated by the traffic island) turns left onto the A509 (Northbound).

Right-most lane can go into the right or middle lane on the roundabout (for MK / A509(S)).

If you go into the middle lane of the roundabout, be aware that you may not be the only one heading there!

I've lived in the MK area since I was born. My family and I have used this roundabout countless times, and this is how we use it.

If you're coming at the turn from the M1, and you want to go to:

Here is a visual: 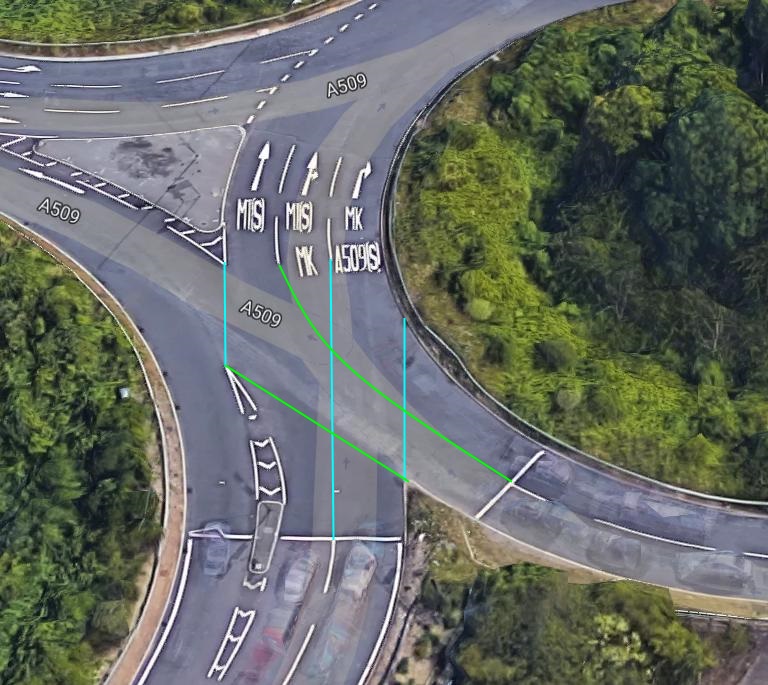 On approach to the roundabout you have three lanes:

On the roundabout, you have three lanes:

Thats the only acceptable use of those lanes.

See on the following image my very skillful depiction in MS paint of the junction with more of the roundabout. The purple line allows you to rejoin the A509 in the direction you came from, if you so wish, as well as allowing you to take the MK exit. 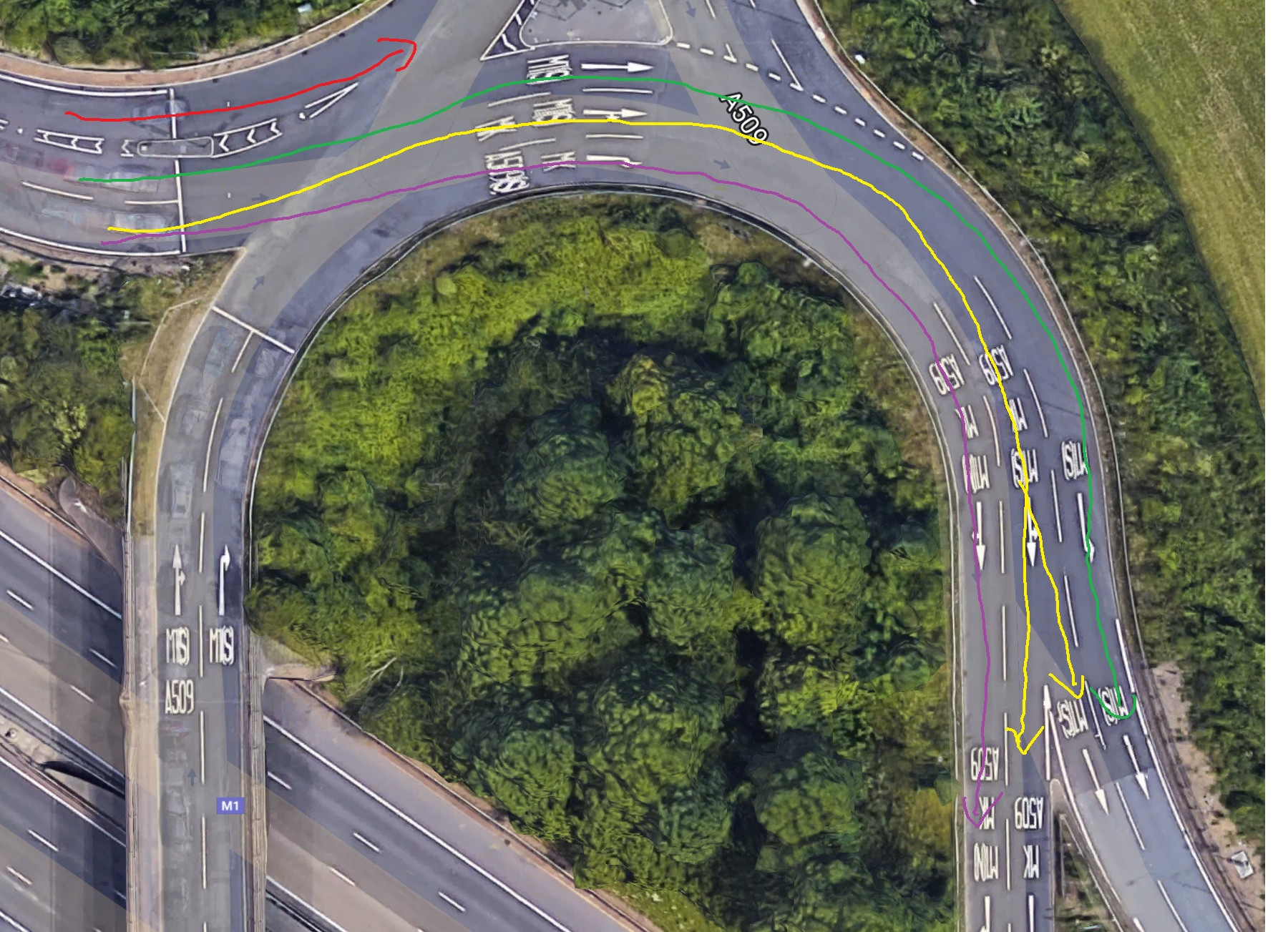 To see the continuation of the yellow and purple lanes, I have followed the roundabout further around for clarity: 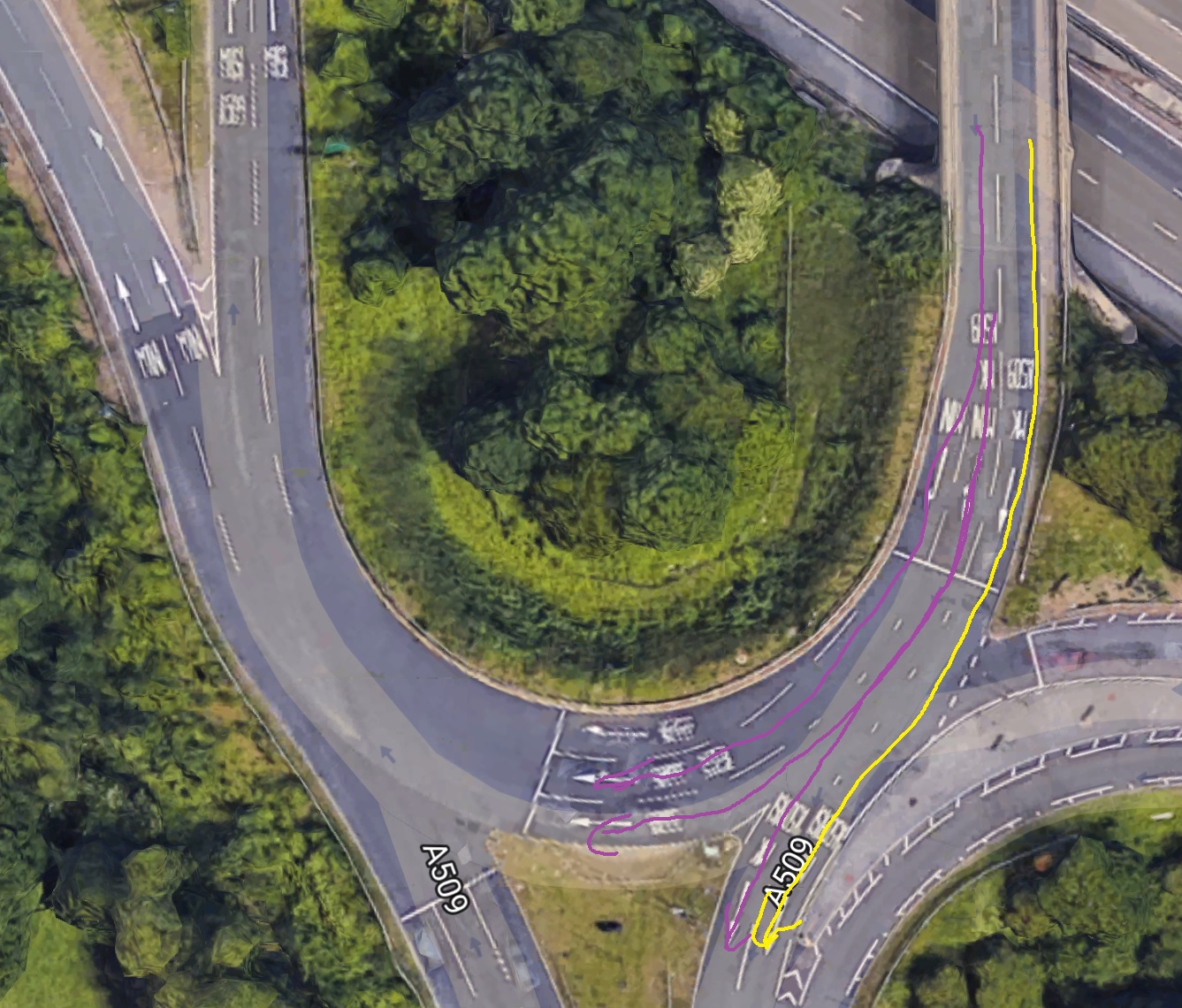 Whilst the above is based on the UK Highway Code, as brhans says in the comments, the green line makes no sense - you are forced back onto the motorway from whence you came...

The road markings on the approach to the roundabout modify the normal rules, and we end up with this: 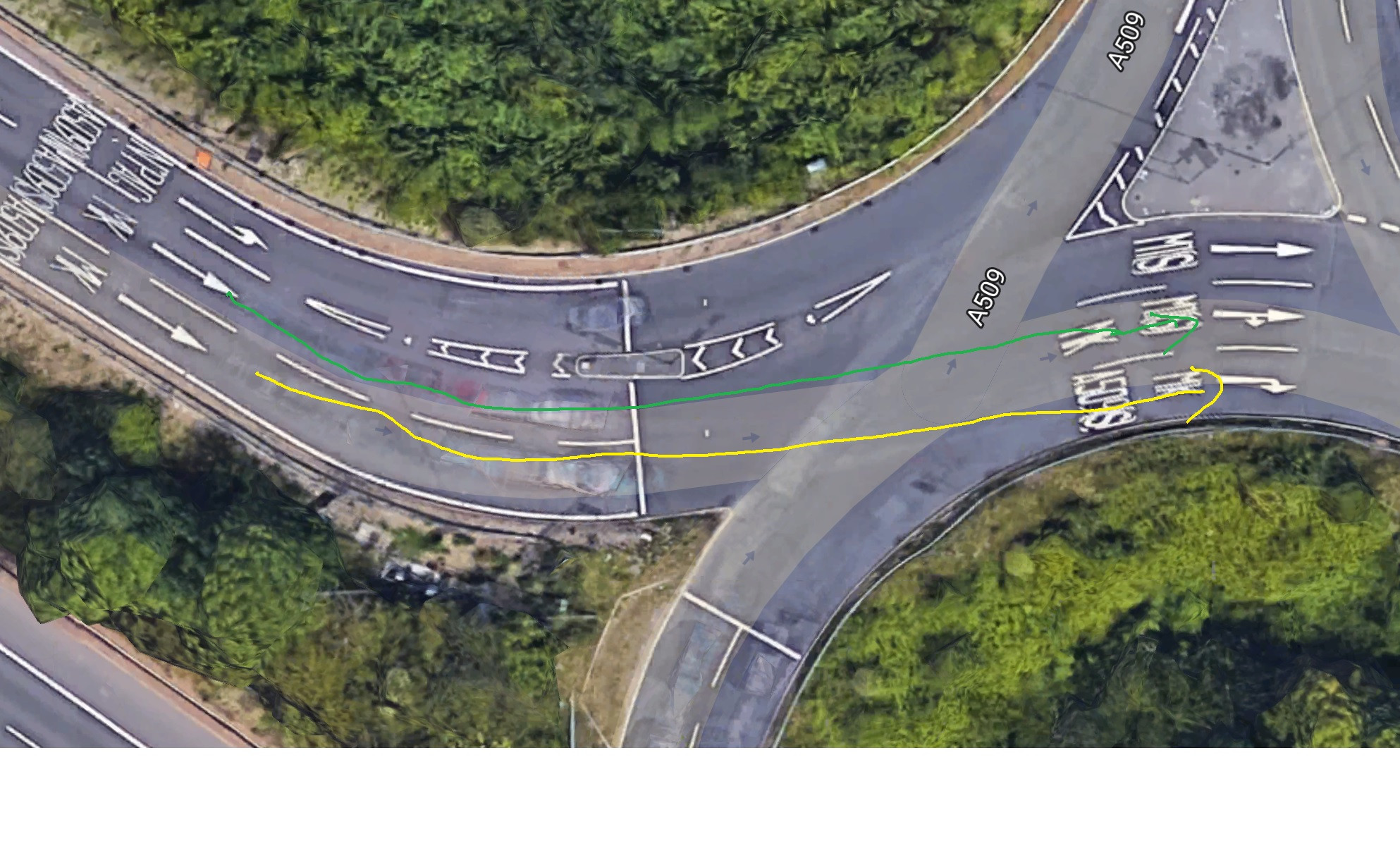 The "correct answer" to the question should be on the road signs you have just passed as you approached the roundabout. They should have indicated which of the two lanes to choose for the various exits marked on the road (M1 southbound, MK (Milton Keynes?), and A509 southbound)

The road markings in your second picture are also directions for traffic that is already on the roundabout (coming from the right).

The "general principle" in the UK is that if you are going to pass several several exits before you leave (i.e. you are turning right and staying on the roundabout while you turn through 270 degrees) you enter in the inside lane, and "spiral outwards" to get into the correct lane to leave, as the other traffic exits from the outside lane(s).

There may be more than one lane leaving the roundabout at an exit, depending on the number of lanes on the road away from that exit. At major road junctions (which this one appears to be, from the pictures) the outside lane may only lead to the next exit - i.e. you can't (officially!) continue on the roundabout if you are in the outside lane.

Since the entrance to the roundabout is controlled by traffic lights, the "easiest" options will be to take the left and right hand lanes on the roundabout, not the central one - but if you are going to MK, you will probably need to move out of the right hand lane soon if you do that.

This is the exit ramp from M1 south, so the only people wanting to get back on M1(S) will be those who've made a mistake. The two lanes on the exit ramp are signed for Milton Keynes, so both will want to enter a MK lane. The left lane should use the leftmost MK lane, the right lane the rightmost MK lane. The lane to M1(S) alone could be entered from the left lane but almost no one will want to do that.

Regardless of which lane you want to end up in on the roundabout, here's how I have always interpreted a junction like this: 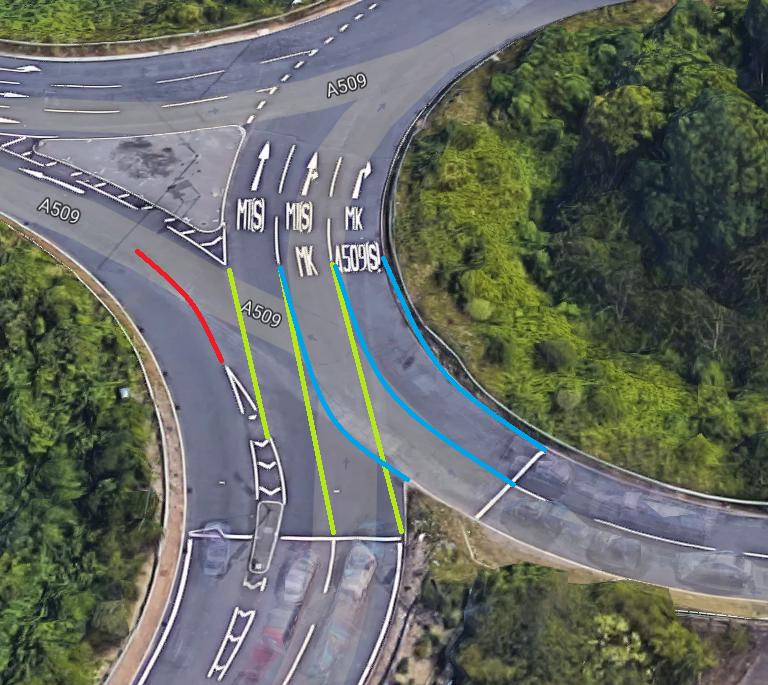 Whichever direction you're coming from, if you want to leave the path I've laid out by colour coding, you need to indicate and transfer.

I wish I had proof that this is correct (and I find that everybody seems to have their own idea about what to do, particularly on the M42 Northbound at Tamworth services — ugh), but it's what I do and it follows from the curvature of the roundabout's furniture.

Not the answer you're looking for? Browse other questions tagged uk driving or ask your own question.

33
What does it mean to be in the fast lane in California?
12
How should you drive on rush-hour lanes ("Spitsstrook") in the Netherlands if they are open?
24
How do I safely navigate a two-lane roundabout in the UK?
32
Rules for this road junction in Germany
8
What do two fingers up mean on roads in California?
8
UK Motorways, Two Lane Slip Road Joins
2
Placename abbreviations on British roads
4
Is it legal to turn right on to the near lane of 4 lane road (two lanes per direction), when there is a vehicle on the far lane (USA)