What is the most dangerous area of Paris (or its suburbs) according to police statistics?

When I travel I like to visit areas which are deemed 'dangerous' by tourist guides. Often they turn out to be a little rough but not at all dangerous and interesting to see.

So the question is: what is the most 'dangerous' area I can visit in Paris? In order to make the question non-subjective, police statistics are welcome. I am aware that certain tourist sites have a high concentration of scam artists, but I'm more interested in 'neighborhoods' that are considered hazardous by local authorities.

I can help with places that are horribly dangerous, but it's a matter of opinion as to what is the most dangerous. Earlier this year I was part of a mission sent by the JCWI to assist refugees. We went to Calais and to Paris. Armed escorts accompanied us every step of the way.

Go to the Stalingrad Metro stop (Northeastern Paris). When you come out turn right and head Northeast to the Avenue de Flandre. Proceed up the Avenue a few blocks and turn left on to any side street. There you will find a somewhat post-apocalyptic venue where migrants have created a camp site. It's bloody dangerous and borderline foolhardy to stroll around without an escort.

And if that's not adventurous enough, there is an abandoned railway running around the centre of Paris called the 'Petite Ceinture' (i.e., 'little belt'). Portions of the track path have been claimed for ad-hoc, makeshift migrant camps. These are essentially lawless.

To try it, you can pick up the tracks near the Gare d'Orsay (or really anywhere along the track path). Walk along the track path towards the Southeastern part of Paris. You'll find tents and mattresses and what-not strewn about and you'll be well satisfied that you have experienced urban danger in Paris. Don't even think about it at night. 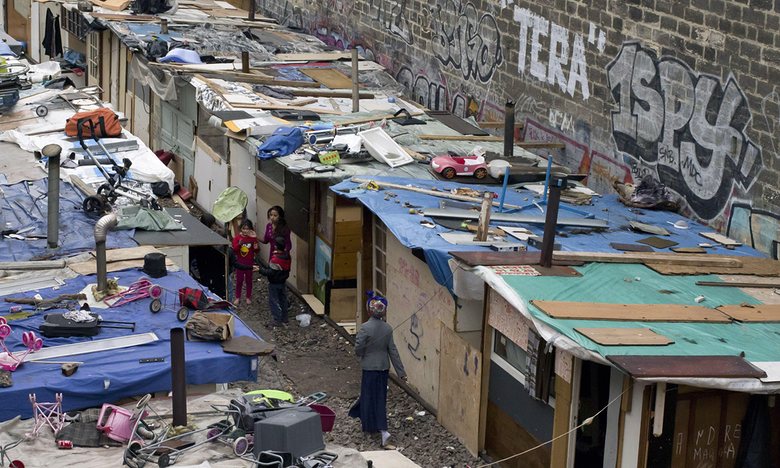 (The Guardian, fair use)

All of this is time sensitive because the citizens are really angry and the city is taking steps to fix things. So go now. And as for police statistics? LOL! These places are 'unregulated'.

If you're just looking for medium spooky scary, try the Catacombs with an unofficial night tour guide.

Jonathan Reez asks "Is it okay to visit that migrant camp if not carrying any valuables?"

Unless you have a sign in about 12 languages that you are not carrying valuables, I wouldn't suggest it. Your best strategy is to wait until you spot a police patrol on foot and ask if you can join them. Or stay close behind them without permission, but then expect a sharp challenge. Are you a trafficker? A pimp? Dealing drugs? Looking for children to kidnap? A serial killer? What are you doing there? You don't belong! These questions would by posed to YOU, the visitor, rather than to the inhabitants. The police would be upset because you are in an unregulated place and they will have to waste time escorting you to safety.

Sumydra comments: "-1 for stereotype (migrants -> crime) without any data to back it up"

Interestingly, there has been no mention of 'migrant crime' at all in this answer, even through all of its various edits. The answer addresses 'danger'. Let's turn to an earlier definition put forth on this site where the topic was Russia...

Having said that, if your definition of 'dangerous' includes feeling unsafe, or being physically intimidated, or any other source of discomfort brought on by the locals, then these things could lead to a feeling of being threatened. At the very least the discomfort brought on by a perceived threat will spoil your mood, and possibly lead to the conclusion that it's dangerous. This can happen without any crime being committed, such as a direct physical assault. Physical intimidation is also not a crime, but leads to the same feeling of threat and being unsafe.

This passage is saying that 'danger' is often a state where the person feels the absence of safety. "Crime" and "criminality" can, and often have nothing to do with it. Also, there is nothing in this answer that stereotypes a particular ethnic group. These notions were introduced by commenters, most likely as a misconceived display of piety. It's my experience that the areas mentioned in this answer represent hundreds of groups, including born and bred Frenchmen.

And for those who think such things matter or perceive an insult or otherwise think I am throwing shade, note that I am an Islamic طالب علم under the tutelage of a Sunni scholar.

Most credible reports inform us that these incidents were sparked by yobbos out on a wilding rather than the migrants themselves.

Related to the closure of the migrant camps in Calais, some news sources are reporting that the Paris migrant camps have expanded to include the 10th Arrondissement. The 10th was not very safe to begin with because of the Gare du Nord and Gare de l' Est. Accordingly, heightened situational awareness is advisable whilst in the 10th (in addition to the previously mentioned 19th).

Inside Paris, the northern east part is the most "dangerous"... Having said that, this is nothing if you compare it to reference cities like Johannesburg for instance.

It is a bit old but the ranking is certainly still pretty accurate. Around Paris, good places to visit for you are Saint Denis, Aubervilliers and La Courneuve. Inside Paris, you can go to Porte de la Chapelle, Belleville or La Goutte d'Or areas.

Paris is as safe (or dangerous, depending on your point of view) as any other big city in the world.

There is a lot of police everywhere (especially since the last 2 years) and more in the center of the city near the tourist areas.

Most crime against tourists are scams, harassment and pickpocketing and happen in high traffic areas (local attractions, public transport).

Some areas beyond the "périphérique" (highway surrounding the city) are maybe less safe, but as a tourist, there is not much to see there (except the wonderful cathedral in Saint-Denis)

(see this, mostly page 17 which display results for small crimes for 2008)

Lots of drama in some answers/comments… It reminds me of this US taxi driver who told me he would never go to France after watching US medias reports about "muslim riots" — which really had nothing to do with muslims, and were really localized, both in time, space and number of people involved.

I guess that "dangerousness" in this context is basically the risk of aggression (therefore I assume a different definition than Gayot Fow). It might be obvious but everything has to do with your attitude and appearance. (Do NOT try this !)

Beware of criminal statistics, they are strongly biased, not straightforward to interpret, and sometimes institutionaly falsified.

Gayot Fow mentions migrants camps as being supposedly the most dangerous places. I can't speak from personal experience, but many local associations [fr] are in contact with these people. I'm pretty sure if you dress modestly and are confident and respectful, even more if you bring something to offer, it can be a powerful experience. I read (not online, no link) that some were eager to offer coffee to visiting people. Now things may be different if you dress fancy with ostensible signs of wealth and showing disdain, or if you are a pretty girl wearing short clothes (remember some, if not most, may not be accustomed to see the skin of women in the street), or during the night.

Olielo mentions Aubervilliers. Aubervilliers is basically a giant Chinese supermarket. The criminal rate is high mostly because there is a belief that Chinese people carry high amounts of cash. If you are not from Asian descent, you don't risk much there. Again, appearance…

Olielo also mentions Saint Denis. Note that it is a well-known place for drug traffic, which may increase its criminality rate. Yet Saint-Denis is indubitably one of the least secure places.

Other places newspapers make French people wary about might be Gare du Nord, and the RER B (urban train line), mostly in almost empty wagons I believe.

If you drive, you might also check for intersections with higher risks of theft. I don't know them and they may vary in time.

That being said, I concur with the two first sentences in Max' answer, about Paris (and its surroundings, including Saint Denis) being as safe as any other big city, and police being everywhere.

If you just want a sensation of danger, as suggested by Gayot Fow, you may find intimidating groups of people at night around metro stations such as Porte de Clignancourt or Barbès, and during the day around entrances of low-rise blocks in subburbs (e.g. Saint-Denis).

Finally, if you visit the XVIth arrondissement (rich residential area) while dressing and walking like a young guy from Paris' suburbs, especially if you're a bit tanned, it is not unlikely that you make French police's acquaintance.

Not the answer you're looking for? Browse other questions tagged safety paris urban-exploration or ask your own question.

43
Can I enter and exit a country immediately?
29
Visiting Russia as an Arab. Am I going to be hassled?
2
How safe is souther suburbs of Paris?