How long before I can re-enter the UK after Youth Mobility?

I complied with the rules by leaving after 2 years in UK and didn't overstay.

It's been 3 months since I exited UK. I flew to the Republic of Ireland and have been a tourist doing unpaid writing and photography for a blog.

My partner lives in UK and is working. He's currently applying for residency rights and was just sent letter saying he now can apply for a National Insurance Number.

I'd like to come back to the UK as a visitor and see him. I have also registered a company in the UK so I will need to see an accountant to do the company's first tax return.

We noted that while flying from Belfast to London there is no passport control. What's the penalty for entering Northern Ireland and flying to London from there? What happens when you don't get a temporary passport stamp?

I have no intention of staying long term. I'm just planning on doing the tax and seeing my partner.

You are in the ROI previously in the UK on a YMS visa and you want to enter the UK via a port in the Common Travel Area.

The answer provided by 'the other one' is great. +1 from me, thanks and a tip of the hat! I wanted to add that in this particular case we can turn to Border Force's Operations Manual and have a closer look. Here's the relevant scan... 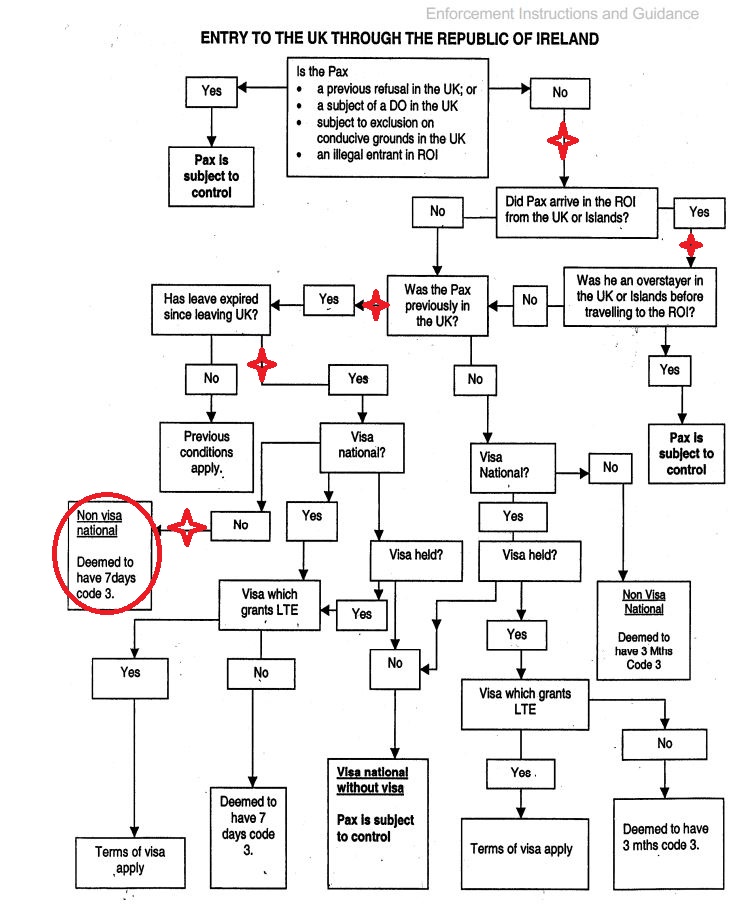 I defaced the original by adding little red thingies that trace your situation through the flowchart. You will be able to see that it ends on the result "deemed to have 7 days code 3".

So they are saying that you get 7 days more or less automatically. After that you become an overstayer of the 'inadvertent' kind (that's a bad thing). Unless they think that you intended to overstay in which case you become an illegal entrant (that's a very bad thing). In your case they would go for the latter because you have a bf in the UK which helps to establish intent. That situation will be exacerbated because they are already upset about the number of Aussies who are abusing the YMS (like using the CTA loophole for example), so you can expect a difficult time if (and only if) you get caught.

Those outcomes only happen if you get caught inland at some event which requires your id, otherwise you're off the hook. The other downside is you may have to lie on future UK applications to prevent disclosure of illegal entry (that's a precarious position to be in).

That's a technical and 'legally precise' answer to your question. In practical terms and for everyday knowledge, you can use 'the other one's answer.

There is no mandatory cooling-off period between YMS and visitor, you can return the same day if you want. The big problem (and I mean BIG problem) is that you will have to explain to an Immigration Officer what it's all about. And that interview can be hazardous to your travelling plans.

NOTE: The "code 3" part is their internal shorthand that summarises the situation. The best practices on how to interpret this is to ignore it altogether.

NOTE: The ROI has their own counterpart to this flowchart and your situation there may be dubious depending upon how you entered. You should check that out as a matter of extreme urgency. You don't want to be caught out or matters will become immeasurably worse.

NOTE: Since your bf's status in the UK is apparently unstable, your interaction with an IO may attract scrutiny of his status of the hostile variety. The comment from CMaster about treading carefully is fully loaded, heed it.

NOTE: For others, the flowchart can be used for all non-EAA nationals coming to the UK through the ROI.

NOTE: the flowchart is not something the Border Force just dreamed up on a whim. It is a visual extract of the applicable portions of the Immigration Rules Part 1. It means everything on the chart exists with legislative authority handed down by Parliament.

The Republic of Ireland and the UK (and the Isle of Mann and Channel Islands) are part of the Common Travel Area (https://en.wikipedia.org/wiki/Common_Travel_Area)

A flight from Dublin to England is treat the same as a domestic flight. Whether you fly from Belfast or Dublin makes no difference.

There is no immigration check when travelling between the two however to board a plane you will still probably have to show some ID, which is usually taken to mean just a passport (though a EU driving license or ID card may be OK. unsure).

I wouldn't risk going to Belfast just to fly over if I was you. It is not inconceivable that this could lead to you being flagged in a system and getting a spot check. If you're flying from Dublin to the UK and all isn't OK you can put this down to you being unsure about your status, nice and innocent. Going up to Belfast just to fly over when there are perfectly good and cheap flights from Dublin....that seems like you're trying to evade them.

0
Does an Australian need a visa to enter the UK?
5
How common are border checks on buses and trains Dublin-Belfast (and back)?
4
When am I eligible to return to UK post Youth Mobility Visa?
3
How do I get a passport stamp when traveling from Ireland to the UK?
4
Enter Ireland as non-visa national and proceed to UK - what is the allowed duration of stay?

17
Renting a car in Ireland & Great Britain: 1 rental or 2?
4
When am I eligible to return to UK post Youth Mobility Visa?
2
I have a UK passport, can I re-enter Hong Kong every month and stay for 6 months?
9
Why did a Dublin immigration officer write “IT NI” on my passport stamp?