In August of 2014, my UK 2-year visa was cancelled at the border, although I was granted a 13-day temporary admission, along with my daughter. I appealed this decision, through two different lawyers. The appeal was denied on the grounds that I had intended to stay in a private residence instead of the hotels I indicated on the form I had completed, and that I did not have sufficient funds for my stay in the UK.

I instructed the second lawyer not to pursue the matter any further.

Since then, I went ahead and applied to renew my US visa, which was granted, and I travelled to the US last year and stayed for the summer.

I am reapplying for a UK visa and on the application form, under immigration issues, it has two options:

I do not know which one to pick.

Based on what you wrote, you would complete the form like this... 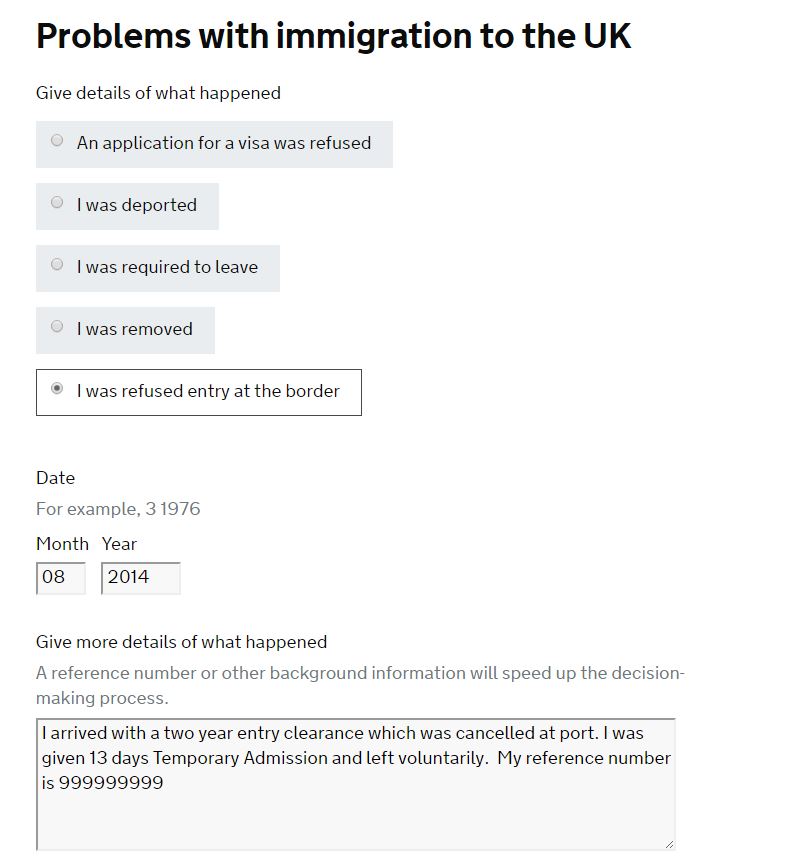 Even though you were given 13 days TA, the event is properly recorded as being refused entry. As long as you put it down and provide your reference number, they will be able to pull up your record and see what happened. If you do not have the paperwork they gave you when you got TA, you can alternatively use your entry clearance number.

You don't need to go through the part about appealing their decision since the Tribunal did not overrule them.

These are not 'trick questions' where you would be expected to know the differences between being deported and being removed. You just need to declare it and give them something they can look it up with.

Note: this version of the form is in 'beta' release. It will probably be modified throughout 2017 to fix grey areas like this one that are causing end-user confusion.

Not the answer you're looking for? Browse other questions tagged visas uk applications or ask your own question.

11
Schengen visa for someone banned in the UK
3
Cancelled uk visa at the point of entry (with Removal form IS82C)
2
Documents to support a further application following the refusal of a Standard UK visa?
19
Cancelled UK visa at airport but still allowed in for 3 weeks. Why did it happen?
3
I need help with the documents that i should provide?
3
My UK standard visit visa application was refused for lack of intention to leave the country