UK Visit Visa refused second time due to lack of funds and unclear documentation. What are my options? 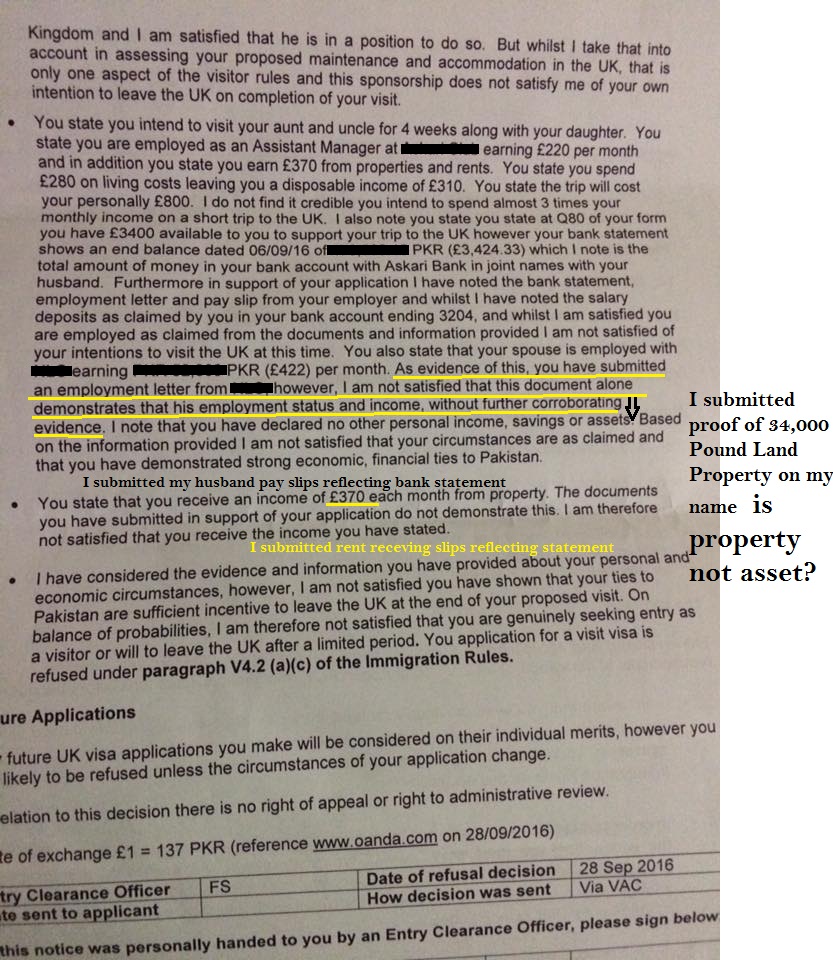 My UK visit visa was refused again. I applied for UK visit visa this July with my 6 years daughter the visa was sponsored by my aunt and uncle both are British nationals.

But my visa was refused due to financial capacity, I didn't submit my bank statements and pay slips and property proof etc. I was wrongly guided by an solicitor that your trip is sponsored so you don't need to show your own statements etc as your sponsors paying for all your expenses. However the guide was totally wrong which led to a refusal.

After that I applied again last week 19 September 2016 from Islamabad, Pakistan and attached all documents: my daughter's school leave approval letter, employer letter, my pay slips of 6 months, my bank statements with balance (GBP3000) my property documents worth (GBP34,000) value also lease agreement of my property monthly income (GBP370) along with rent receiving proofs, my tax return certificates for year 2016, travel itinerary which clearly shown trip of 1 month trip, family registration certificate, along with cover letter visit purpose is to meet my aunt and uncle and visit different places in UK. I mentioned names also in the letter following documents attached with my second attempt

I have attached second refusal please read and guide me this refusal really heard me what are the reason of refusal after having read all my story?

Thanks for uploading your refusal notice, it's not necessary to amend it with margin notes (we're not the Tribunal), but we take your point. They spotted a proportionality issue and it damaged your credibility.

This pattern doesn't make a lot of sense. In your previous refusal, now entitled Am I being scammed? You were using a scam artist or someone unqualified to provide advice services. They were leading you down a contrived path about lodging an administrative review when no such pathway exists. Your advice at that time was...

When your SAR comes back, arrange a consultation with a member of the UK Law Society, use the lookup tool on ILPA.

This clearly didn't happen because a qualified person would have picked up on the proportionality issue vis-a-vis your previous refusal right away and put the brakes on. Your second application was not going to succeed and should have been postponed. The operative statement in both refusals is...

Any future UK applications you make will be considered on their individual merits, however you are likely to be refused unless the circumstances of your application change.

This time you gave a lot more evidence and they agreed that your relatives are OK for sponsorship, but nothing really changed about YOU did it? All of the stuff you submitted still reflects the same circumstances as your previous application. For example, you are financially dependent, and still reliant on cosponsors and still spending a disproportionate amount of your reserves for a visit.

I really like CMaster's comment about the VFS situation in South Asia where courrier personnel are removing evidence from an applicant's bundle. This is true and is a topic of on-going concern and worry for practitioners, but your narrative seems to show that all of your evidence was accounted for.

I have attached second refusal please read and guide me this refusal really heard me what are the reason of refusal after having read all my story?

They got you on Appendix V 4.2 (a) & (c), which essentially means there's a good chance you will abscond your visa and go underground and probably become reliant upon public funds. It's a very common refusal for co-sponsored applications (especially for applicants in South Asia because of the preponderance of historical performance issues) that are weak to begin with, we have a lot of these in the archives here.

You're in a situation of serial refusals, it's advisable to stop applying at the moment and that your next application be represented by a qualified solicitor.

And just for the record about your bank statements. You need to submit them even if you are being sponsored by relatives. It's fundamental advice that bank statements are part of every weak applicant's evidence because they help the decision-maker reach an informed and fair decision. See Should I submit bank statements when applying for a UK Visa? What do they say about me? for a lengthy discussion about it.

Adding: The refusal notice mentions the name of a Pakistani bank explicitly. That usually means it shows up on one of the lists they keep. Or it might mean nothing at all, but it might be worthwhile to see if other people using statements from the same bank are having similar problems making visa applications to Europe. See http://www.legislation.gov.uk/ukpga/2000/8/contents

Not the answer you're looking for? Browse other questions tagged uk visa-refusals proof-provenance-of-funds proof-of-employment or ask your own question.

123
Should I submit bank statements when applying for a UK Visa? What do they say about me?
10
Am I being scammed? (UK visit visa refusal)