Is it easy to find milk in Laos?

I've read that in Thailand there are a lot of 7/11 shops where you can buy all kinds of milk. But what happens in Laos? Is it easy to find milk in Laos? (more concrete: UHT milk).

Milk is available at the only two supermarkets I've been able to find in Vientiane and from the local convenience store chain, M-Point Mart.

There were one and two litre plastic bottles of regular and skim milk and one litre cartons of UHT milk.

All the milk seemed to have Thai labels, not Lao (though one of the companies is a Japanese company). This means it's all imported from Thailand. Vientiane is only 20km from the border so I don't know if the other corners of the country can get the fresh milk or only the UHT. 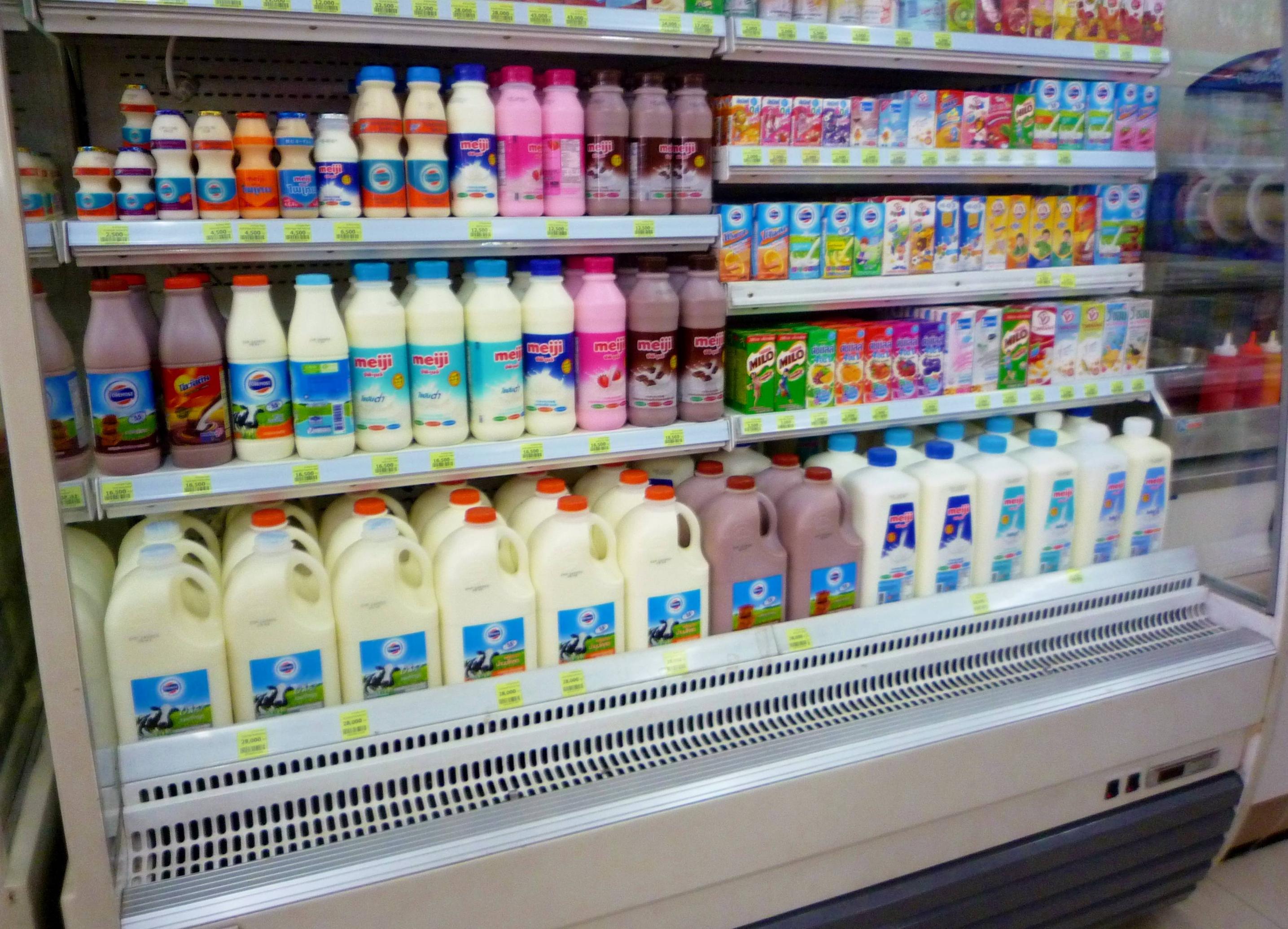 Milk section of a Vientiane M-Point Mart. Soy milk is in a separate section to the left not in this photo.

I'm not sure if milk is available at the generic/independent minimarts which are much more common than supermarkets or convenience stores here.

I'm not sure if supermarkets or convenience stores exist outside the capital or the other larger cities. I assume the small minimarts will stock the same products in all towns and villages though.

Now one thing I have noticed is that soy milk is very common here. The soy milk is also produced across the border in Thailand and is available at all the previous kinds of places plus even the stalls and stands on the sides of the roads. Perhaps it's popular because it may enjoy a longer shelf life and be more suitable to being transported around the country in the hot humid conditions with bad roads in aging trucks. But of course I overlooked th fact that lactose intolerance is much higher in most of Asia than in the west and soy milk has no lactose. Compared to some soy milks it tastes very nice, comes in at least three varieties, including chocolate and an "energy" version:

A bottle of Thai ไวตามิ้ลค์ (Vitamilk) I drank in Vientiane.

Judging by the cost of living charts for Laos, milk is not particularly expensive, indicating it's probably not hard to find and not rare, even if a lot of the locals are lactose-intolerant, it's readily available in supermarkets.

Evidence of this is found in a blog about this very topic where they indicate that certainly in Vientiane, milk is available in supermarkets, and there's no reason to indicate there should be a problem anywhere else.

As for UHT milk, it's certainly available in Vang Vieng, as evidenced by this blog & photo, so again, should be available elsewhere.

Not the answer you're looking for? Browse other questions tagged food-and-drink shopping laos or ask your own question.

8
Travel from Thailand to Vietnam through Laos - good idea?
3
What happens if you don't have a passport photo when you get to the Laos border for a visa-on-arrival?
4
Obtaining Mongolian visa in Vientiane, Laos
6
Laos visa-on-arrival for Indian Citizens: Is it also available at land border crossings?
3
Where do I buy ground coffee around Kata beach, Thailand?
1
I recently entered Thailand from Laos and was allowed to stay for 30 days without visa. Can I do it one more time?