Is it possible to go from Battambang to Phnom Penh by bamboo train?

Looking for some information about Cambodia, I have read this here:

Despite the lack of normal train services there are bamboo trains or noris running around Battambang, and you can also travel on a bamboo train from the outskirts of Phnom Penh to Battambang on demand.

This is very surprising because the distance is long (more than 200 km) and these bamboo trains don't seem too reliable.

If this is possible, what's the price for this trip?

Is it possible to go from Battambang to Phnom Penh by bamboo train?

Unfortunately I think the answer to this is: No. So to:

what's the price for this trip?

the answer would be: there isn't one.

The quote you can also travel on a bamboo train from the outskirts of Phnom Penh to Battambang on demand from Wikivoyage seems undated and unsourced (though this might just be that I am unfamiliar with the editing system there).

However at TripAdvisor we have Giu_Bru88 on 20 November 2014 who claims:

They are planning in opening again the train rails Battambang-Phnom Penh in two years time and the route is exactly on the Bamboo Train route.

Re-opening that route has been mooted for a lot longer than just the last two years, so far from conclusive, though perhaps indicative. The latest readily available information from the company in charge of the redevelopment Royal Railway is certainly very not up-to-date: 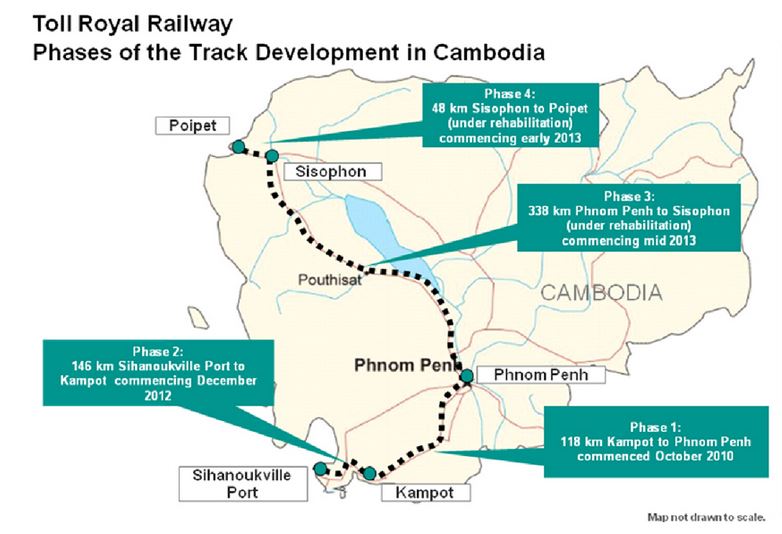 Wikipedia is not much more so with:

The Western line connecting to the Thai rail network at Poipet is currently being reconstructed, scheduled to open in phases during 2014 and 2015.

At the same link we have a fairly positive assertion from N0dell 26 January 2015:

There was a time that these bamboo trains ran all the way to Phnom Penh, but now you are limited to a short section.

We also appear to have complete silence from anyone who has ever managed such a trip. The Man in Seat 61… is very comprehensive in general but makes no mention of the possibility, though by bus ($5 or $6) is covered. Mr Seng, who introduces the video at Steem mentions:

the trains run from here to the next station

and, with similar comments from another,

after they remove this railway and they build a new railway the people here will lose their jobs, but the economy in Cambodia will increase.

So it rather depends upon whom to believe. My 'vote' is that it can't be done.

Since that is partly because of economics:

You mention "the distance is long (more than 200 km)" but Google Maps shows the distance Battambang to Phnom Penh as 294km by road and the train route would be of similar length, though some allowance might be made for "from the outskirts of Phnom Penh" rather than city centre. Say 280 km.

The top speed of a norry has been estimated as 25 - 30 mph Jeff s 15 September 2016 et al (40 kph per Wikipedia) so an average speed when under way of around 30 km/h as estimated by @motoDrizzt seems 'about right' or even generous. If, as mentioned in a Comment by @Peter Hahndorf broken bridge, just carry that thing through the river who knows how long that might take.

Hence a journey time that would clearly exceed 9 hours even without refuelling or having to give way to traffic in the opposite direction, let alone missing bridges. 15 hours, as estimated by @motoDrizzt, seems a reasonable estimate. So, for the driver to get back home, say 30 hours.

In that time, where is the driver (never mind any passenger) to eat and sleep and perform other essential bodily functions? Where to 'park' his nori safely while doing so? Who is to help carry the carriage off and on the track if required? Perhaps then two drivers, so 60 hours.

At present the cost of a trip of around 7 km is around US$5 – 10 for about one hour or less (including turn-around time at a village). With say four passengers per trip, that is about $30/hour. Clearly exorbitant for Cambodia (cf bus fares mentioned above) but could be a very good reason to decline a much lower hourly rate, say $10/hour, for the sake of a run to Phnom Penh. According to Ith Sorn in the video "Every day, I transport things non-stop", so it is not as though US$5 – 10 need include a significant allowance for 'availability' (idle time).

So to be viable, it seems the cost would need to be at least $600, or possibly $300 a head – for an extremely uncomfortable 15 hour journey that could be covered by bus for $5 or $6 in about six hours!

It seems the demand can't exist and hence there is no supply.

[sources for most of what follows: lot of searches on Internet and a bit of common sense]

Your key here is the word "on demand". For example, the sentence

is entirely true: you just need to pay enough, and you'll certainly find a volunteer. In that it helps being Cambodia, where most people are poor enough to be more than willing to do lot of things for a relatively few bucks.

Bamboo train's wrecks tracks between Phnom Penh and Battambang are still there. Their condition, as someone wrote in a comment, is not a problem at all: in case you just dismantle the Nori and carry it on to the next good spot.

One not so small problem could be time: Nori average speed should be in the range of 30 km/h, so it will take you at least 10 hour to travel the entire route -even if I think 15 hours is a much more accurate guess if we want to foresee all possible problems and a few stop for fuel and/or take a break.

But, again, if you are more than willing to do it, and to pay for, you'll be able to do it: just don't expect it to be a walk in the park at the price tag of a banana. And maybe hurry, 'cause sooner or later the government will decide to remove part of those tracks.

Not the answer you're looking for? Browse other questions tagged trains transportation adventure cambodia or ask your own question.

7
Boat from Phnom Penh to Siem Reap in April
2
Crossing border from Phnom Penh, Cambodia to Tay Ninh, Vietnam
9
Can you buy Eurostar Brussels-Lille tickets on the day, for the same price as in advance?
9
How can I search for French trains (only - no buses)?
7
Buying electronics in Phnom Penh
1
Is it true that electronics such as laptop computers are tax free in Cambodia?
5
Which floating villages/markets in Cambodia/Vietnam are most suitable for a touring family with small children in February?
2
Crossing the Cambodia/Vietnam border and single/multi entry visas
2
Booking ETS Platinum class trains more than 24 hours in advance