Can US cards be used in countries with chip-and-pin systems?

I'll be visiting the UK in a few weeks, and I understand that the UK credit/debit card system works on a "chip-and-pin" system. As far as I can ascertain via Google, US cards don't have this system on them. I've also read on some websites that certain readers will not process cards without the chip-and-pin, but I'm not sure how widespread such readers are.

With that in mind, is it likely that my US-issued card will be generally usable in the UK and other countries with the chip-and-pin system, or should I be ready to exchange cash? In addition, does credit/debit make a difference in this regard?

is it likely that my US-issued card will be generally usable in the UK and other countries with the chip-and-pin system, or should I be ready to exchange cash?

You should be able to use your card at most places, in the UK and other countries too. At least ATMs and most shops accept it, while some vending machines may require a chip-and-pin (i.e. EMV) card.

Wikipedia has this to say (regarding UK & Ireland):

While most terminals will still accept a magnetic strip card, and the major credit card brands require vendors to accept them, poorly trained staff may refuse to take the card under the mistaken belief that they will be held liable for any fraud if the card cannot verify a PIN. Non-chip-and-PIN cards may also not work in some unattended vending machines at, for example, transport stations.

If you're still worried, there are options like this:

In 2010 a number of companies began issuing pre-paid debit cards that incorporate the Chip & PIN which allows Americans to load up cash as Euros or British Pounds.

In Finland, ATMs have two slots: blue for chip cards and yellow for legacy cards with only magnetic stripe. (In most counties using EMV there's just one slot for both kinds of cards though, AFAIK.) 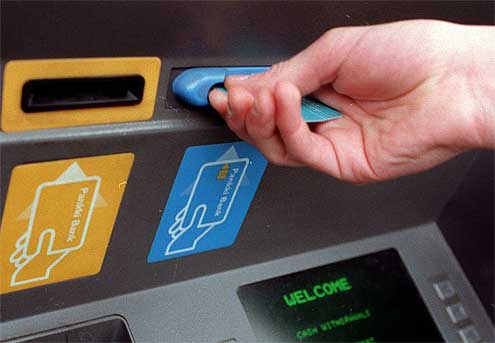 In France, which was one of the first country to generalize credit/debit card with chips (in the early 1990s), credit cards without a chip are still accepted in all stores (or at least should be, I believe this is part of the merchant agreement with Visa or Mastercard). You'll have to sign the receipt as usual, whereas most other customers (who have a card with a chip) will type their PIN on the merchant's terminal instead. I expect the situation to be the same in other countries that have switched to chip cards.

As far as I know, there are no ATMs that require a chip card.

There are automatic vending machines that may require a card with a chip. For example, in France, if you purchase a tran ticket on the web, you can print it out on a vending machine only if your card has a chip (you can still get your ticket from a ticket office window). This kind of restriction is common in transport-related vending machines throughout Europe (some even require a national banking card), for some reason. I don't know what the specifics are in the UK.

Whether or not your card will be accepted may differ from store to store and bank to bank, depending on the (updated) equipment they use. It is rare, but there are still instances where you can pay with your credit card being swiped over a piece of carbon papers.

As important it is to consider your interbank network. The biggest on the market are Cirrus and Visa Plus. Most cards have their logo printed on them:

So, even if you have a chip-and-pin system, but are with the "wrong" interbank network you might end up being stuck.

I guess the best advice I can give is to contact your bank for advice. There are so many factors to consider that there might not be a generic answer.

As explained in other answers, many European countries have used debit cards with chip-and-PIN for many years but some credit cards still had no chip and point-of-sale terminals often supported both. However, it seems there is an effort to move even further away from magnetic strip cards, generalizing chips to all cards without exception and penalizing retailers who choose to support magnetic strip cards, at least in some countries.

Thus, I noticed recently that terminals without magnetic strip readers were becoming more and more common. Some new terminals only have a chip reader and I believe that banks apply different conditions to transactions with credit cards without chip compared to chip-based transactions. Chip-and-signature cards should however still work in those places. ATMs might also still work with magnetic strip cards.

Credit/debit also makes a difference as in some chip-and-PIN countries (e.g. the Netherlands), many stores do not accept credit cards at all, whether chip-based or not. Finally, vending machines (e.g. for public transit or train tickets) have required a chip-and-PIN card (credit or debit) for some time now.

All this means that looking at other solutions (at least a chip-and-signature card from your bank or possibly a third-party chip-and-PIN card like the one mentioned by @littleadv) is increasingly important.

6
Do I need a "chip" card in the Czech Republic?
9
Magnetic stripe or EMV (chip-and-pin) credit cards in France?
1
North-American chipless credit card in France

10
Any first-hand information on American "chip and no PIN" cards in the U.K.?
9
Magnetic stripe or EMV (chip-and-pin) credit cards in France?
8
Using Chip-and-Pin credit cards in the US?
6
Pin-and-chip versus signature in the UK
6
Will my "online chip & pin" Visa card work at Swedish ticket machines?
8
London cycle hire without chip-and-pin
13
Do PINs added to chip-and-sign cards work at chip-and-PIN terminals?
32
Using US "chip & signature" Credit Cards abroad in "chip & PIN" countries
1
Chip-enabled North American signature debit/ATM card -- can it be set up for European/EMV chip and PIN?
5
US chip-and-signature cards in French toll machines