How to find out which airlines have a MITA?

While researching Air Passes, I recently found out that there is something called a MITA which stands for Multilateral Interline Traffic Agreement.

According to the rules for the Gol Brazil Air Pass for example, one needs to enter Brazil on either one of the partner airlines (Air France, KLM, Delta) or travel on flights operated and ticketed by any airline with which GOL (G3) has a mita agreement.

How does one find out which airlines have a MITA agreement then?

Bonus points for also explaining what is a MITA and why it matters.

According to IATA, the Multilateral Interline Traffic Agreements (MITA) is:

an agreement whereby passengers and cargo use a standard traffic document (i.e. passenger ticket or air waybill) to travel on various modes of transport involved in a routing in order to reach a final destination.

One Multilateral Agreement concluded with another airline through IATA results in joining a partnership of the growing network of over 350 participating worldwide domestic and international airlines.

My reading of that, is that there is only one MITA, and each airline/transport body signs up to the IATA MITA and becomes bound by the agreements found within the MITA manual.

Unfortunately I haven't been able to find a free resource with a current list of members, however this bankruptcy document from 2011 appears to provide a list of member airlines at that time. Airlines such as KLM, Qantas, British Airways were at that time signatories of MITA.

A couple of posts on Flyertalk discuss the airpass bought in conjunction with Hahn Air and BA with which Gol doesn't have bilateral interlining, hence the reference to the IATA MITA seems applicable.

Disclaimer: I work at Flightfox

A MITA (Multilateral Interline Traffic Agreement) means that separate airlines can issue flights as a part of one reservation. In practice, it means that:

According to ExpertFlyer, GOL has E-Ticket Interline Agreement with the following airlines: 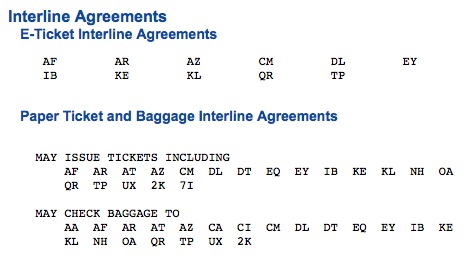 Please note, that AirPass rules mention flights operated and ticketed by any airline. It means that an United flight marketed and sold by Copa will not work. I recommend to get in touch with GOL and confirm if the flights you want to book will qualify for AirPass.

Not the answer you're looking for? Browse other questions tagged airlines or ask your own question.

22
Which airlines provide free stopovers?
22
How can I determine which airlines are relatively safe?
1
Claiming air miles for Air Alaska with codeshares
10
How can two airlines have the same IATA code?
2
Which US airlines have banned the new 'hoverboards' onboard?
1
Any way to find out how crowded a plane will be ? (before buying the ticket)
10
What happens when an operating air carrier goes bankrupt for a flight that was ticketed through another carrier?
60
Which airlines might I have trouble taking, being an Israeli?
8
Which airlines need to hold interline agreements with each other in order for an itinerary to be bookable?
10
Booking a trip to earn airline status