Passport without citizenship of that country? [duplicate]

So I was looking at a travel site where when you make a booking, it asks for both your country of citizenship AND country of passport.

I have dual citizenship, and thus am eligible for both passports. So I could I suppose put South Africa for the citizenship and New Zealand for the passport field if I'm feeling like it, but it seems pointless to have the two fields like that.

Then I wondered - is it possible to get a passport without having citizenship of that country?

In Latvia there is a category of people called "noncitizens" - those people lived in Latvia when it got independence, but they weren't Latvian origin so they did not get Latvian citizenship automatically, and got this status instead. Those people use a passport (it is indeed a true passport) issued by Latvia, but they are not considered citizens of Latvia. This also affects the list of countries they could enter visa-free - for example, they're not allowed to US under ESTA, but they can enter Russia without visa if born before 1992 (Latvian citizens need visa).

Also in the USA if you're a permanent resident, you can obtain the "travel document". It is not a passport (unlike the document mentioned above), but could be used for traveling. This document would be issued by the USA, but for someone who is not US citizen or national.

This is an odd example, but nationality law is full of odd cases.

All US Citizens are considered US Nationals, but it is possible to be a US National without being a US Citizen. This situation applies to some people from American Samoa (and Swains Island, with its population of 17 coconut harvesters), residents of the Northern Mariana Islands who have elected to be non-citizen nationals, and children of existing non-citizen nationals who pass on their nationality (subject to special requirements).

Very few people fall into this category (especially as some American Samoans will still obtain citizenship at birth through Jus sanguinis, and others will naturalize), and the State Department didn't want to spend money printing up special paperwork for them, so people who fall into this atypical classification are issued US Passport books that bear the annotation: "THE BEARER IS A UNITED STATES NATIONAL AND NOT A UNITED STATES CITIZEN."

As the Department has received few requests, there is no justification for the creation of a non-citizen national certificate. Designing a separate document that includes anti-fraud mechanisms was seen as an inefficient expenditure of resources. Therefore, the Department determined that those who would be eligible to apply for such a certificate may instead apply for a United States passport that would delineate and certify their status as a national but not a citizen of the United States.

This status occasionally causes problems, as non-citizen nationals may not be able to hold government jobs, vote, or run for office, at least not without obtaining citizenship, which requires the fee, test, background check, etc...

Yes. For example, people born in American Samoa are not US Citizens under jus soli (although they would be citizens if a parent was a US Citizen), but they would travel on a USA passport. This anomaly is a leftover of American colonialism. American Samoans are US nationals but not citizens. Unlike, say, someone from Puerto Rico, even if resident in one of the 50 states, they would not be eligible to vote. (This situation once held for Puerto Rico and the other territories taken in the Spanish-American War.) Source

I suspect other countries have similar situations.

The remnants of British colonialism left behind a number of complex citizenship situations, including special types of passports issued to non-citizens, such as the British National (Overseas) passport. 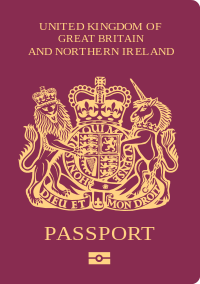 Wikimedia Commons: Hoising (Note the lack of the words "European Union" on the cover, as such passports do not grant EU citizenship rights)

These passports do not grant the right of abode in the UK. While millions of these passports were issued after the handover, far fewer are in use today, as cheaper Hong Kong SAR passports are often more advantageous.

In 1979, six American diplomats were sheltered by Canadian officials after escaping the storming of the US Embassy in Tehran, as dramatized in the film Argo. The effort to sneak them out of the country was coordinated by the CIA and the Canadian government and required Canadian passports so the Americans could pose as part of a Canadian film crew.

Canada's Cabinet met in secret and approved an Order in Council authorizing Canadian passports (under fictitious names) to be issued to the six Americans, as Canadian law would ordinarily prohibit such documents. The diplomats were able to board a flight out of Iran and were reunited with their families.

So yes, it is possible, but this particular route (or any other where a country's government authorizes the special issuance of a passport contrary to normal laws) will require extraordinary circumstances indeed.

When I was working in a hostel in Spain, a few times I checked in people with passports from where they were living instead of from their country of citizenship. There was always something like "non-citizen" printed on it.

For example, Travel Documents near the bottom of http://www.dha.gov.za/index.php/travel-documents2

Not the answer you're looking for? Browse other questions tagged passports dual-nationality factoids or ask your own question.

40
What is the difference between “Country of Issue” and “Country of Citizenship” of a passport?
26
Which country issued my passport if I received it at a consulate abroad?

9
Dual Colombian and US Citizenship - can I enter Brazil visa-free as a Colombian?
9
Which passport to use immediately after naturalisation?
6
Can I have multiple valid ESTAs in different passports?
3
Can I still use my South Africa passport to travel to South Africa after becoming a New Zealand citizen?
10
New British Passport and entering UK for the first time
11
Can a parent use dual citizenship to transport a child out of the USA without a US passport?
6
Dual citizenship causes confusion at passport control