Recently with my 2 friends we've missed the flight from Rome (to another EU city) right at the gate in the following stupid way:

Although at the time (~20 min before the departure) the situation was as follow:

so based on above we've sit next to the others waiting for further announcements.

Based on the assessment of situation given my previous travel experience (at least >50 flights in my life), I've assumed everybody is waiting for the plane and they'll be calling people shortly. In 10 minutes time nothing changed, so I've started to worry. Then 22:20 ladies immediately left their gate desk, without basically doing nothing since we've arrived and the screens changed to the next available flight (this would explain why the other people were calmly sitting). Before the screen changed definitely there was no any last call on the screen or red markings as usually I see.

I've quickly asked another lady from other gate who was available about the plane and she informed that the plane already departed and she cannot do anything. Nobody else was helpful and the situation was unclear what to do next.

Finally we went outside of the boarding area to the check-in desks about 10 minutes after departure and the lady at the desk informed that:

Based on above I was forced to book another flight from different company at 6:00 in the morning to the same city for much less (€312) and staying at the airport for the next flight.

After that I've find out on their website that the company do have Missed Flight Cover copy policy which clearly stated:

And if you miss your flight... don't worry! Just follow these steps:

I thought my ticket could be too cheap, but based on the YouTube video, it's confirming that:

No Exclusion's new Missed Flight Cover policy, simply register at your airport desk within 4 hours after your flight's original departure and then call our Helpline.

It's then your choice of a free re-ticket on the next available flight OR a full flight refund including any pre-booked flight extras - eg bags and reserved seating.

No fees or paperwork, just a simple solution at the airport to protect your ticket.

Based on above, this did not happened despite I've reported at the desk 10 minutes after the flight departed. I've complained to the company (via e-mail) explaining the whole situation and that I was not given any Missed Flight Cover (not even informed about it) and demanded refund according to their missed flight "promise" copy (which is still available at the time of writing) which clearly state:

If you miss your booked flight(s) and physically present yourself in a fit state to fly to the Vueling Airport Ticket Office at the departure point within 4 hours after the scheduled departure time the Insurers will pay at your option either:

This is what they've replied after 2 weeks (key points):

Relating to you compensation request, we inform you that after reviewing your case, the compensation established by EU regulation 261/2004 does not apply to your case.

In light of the aforementioned and having complied with EU regulations, we regret informing you that your compensation request can unfortunately not be honored.

Why they claim that EU regulation did not applied in my case? And why I was not given the Missed Flight Cover "promise"?

Do you suggest I should report that situation to ABTA, or somewhere else?

Unfortunately, you're out of luck.

Missed Flight Cover is an optional Travel Insurance for which there is an additional fee. Did you pay the fee?

Any Compensation regulation does not apply because you were a no-show. The flight operated presumably on time, and possibly from the new gate.

What happened? A probable scenario is that the flight was very lightly booked and all passengers were boarded and the flight closed very quickly. That is why you have to be at the gate at boarding time.

Adding to the correct answer of @Johns-305, you would have to purchase the missed flight cover during booking: 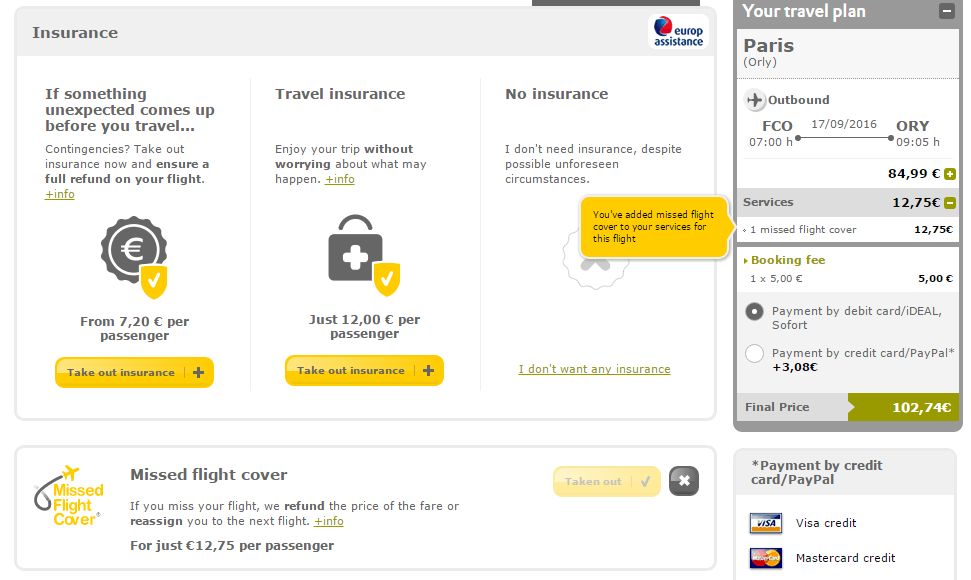 For the sample booking I made it cost EUR 12.75 per person. Also in the Missed Flight Cover FAQ the need to buy such an insurance is quite obviously stated.

The reply by Vueling to your email seems to be a standard letter which is making it a bit confusing but nonetheless:

You are out of luck here. If it consoles you in any way, especially Vueling especially at Rome Fiumicino Airport is infamous for horrible passenger service.

I can not see how contacting ABTA would be of any use in your case.

Not the answer you're looking for? Browse other questions tagged air-travel insurance compensation missed-flights vueling or ask your own question.

9
Subterfuge by budget airline? Missed flight - was charged for transfer
9
EU airlines, late for connection flight due to lines on passport control
15
Who should I go after (Expedia, Finnair or Bangkok Airlines) for a missed flight?
1
International flight missed because of delay in national flight - Compensation options?
4
Given 10 Euro compensation for missed flight which was later cancelled
6
Email about missed connecting flight compensation 5 months after flight, is there a point?