What does the small print below "ESTA" and "non-US citizens" on the LAX immigration signs say? 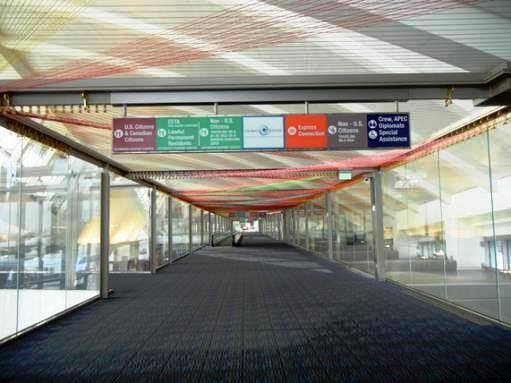 Does any one know what it actually says?

I did remember to take some pictures, but the flash was turned off and lighting was not great. So. Here is the left side of the sign.

In the middle is Global Entry.

All three on the categories on the left say "AUTOMATED PASSPORT CONTROL" at the bottom and have a person-at-a-kiosk symbol at left. From the left,

Here is the photo of the right side.

Side note: I never had to turn in my customs card. The final guy, who I would have expected to take it, just wanted my kiosk receipt. The receipt has your photo that was taken then, no hats nor glasses.

Express Connections is if you are in a hurry to catch a connecting flight because your inbound flight was running late. You will (or should) be given an orange card as you alight the aircraft allowing you to push to the front of the Immigration and Customs queue.

Not the answer you're looking for? Browse other questions tagged usa customs-and-immigration airports los-angeles lax or ask your own question.

5
Light at Canadian border crossing
5
What immigration and customs checks are performed for passengers leaving the U.S.?
5
Is it illegal to enter the US on ESTA while a J-1 is pending?
5
Am I a repeat traveler in terms of ESTA?
12
Passport control: what airport is this?
24
How, exactly, does the ESTA system work - specifically on arrival?
14
right-of-way - merging vs. oncoming traffic in Pennsylvania
5
I purchased two tickets to Universal Studios Hollywood for two people but both tickets have my name on it
0
Revocation of Global Entry privileges for Customs violation
2
Is flight between Puerto Rico and US mainland considered domestic or international