UK Visa refused once under 320(7A), (false or forged document) and I want to apply again

I got one refusal under 320 (7A) due to wrong information provided by other party. Please check the below refusal letter. The signatory of one document (Leave approval letter from my then employer) denied that they provided the letter though she did. I don’t know why she denied giving the letter. That may be that they had fear of losing their employee but it was not my fault. I submitted all genuine documents.

Now, I want to apply again and I fear that it will be refused again automatically and I will be banned for 10 years?

I am associated with a UK based company and handling all operations in India. I am Indian representative of the company. We have registered Liaison office in India. I need to visit the head office in Stockport to meet the management and for training.

Could you please suggest if I should apply again? or how I can explain to them that it was not my fault.

Here is the copy of refusal letter: 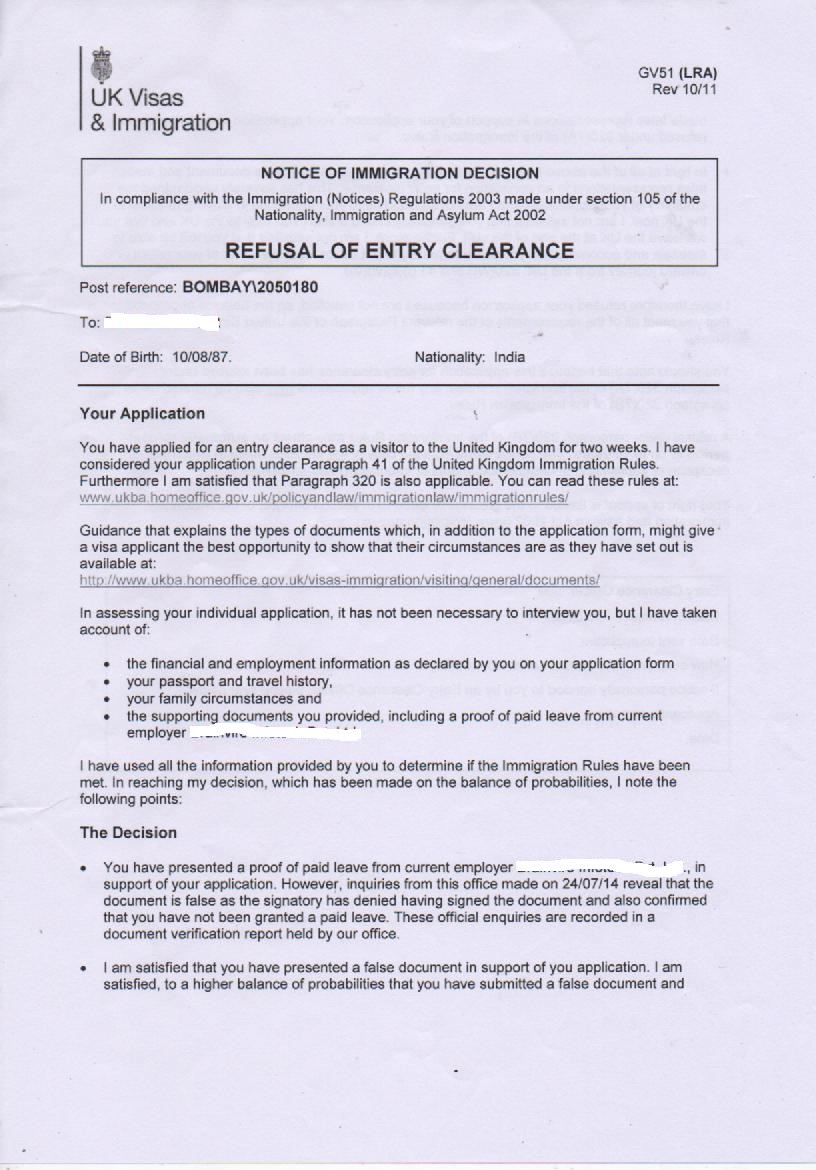 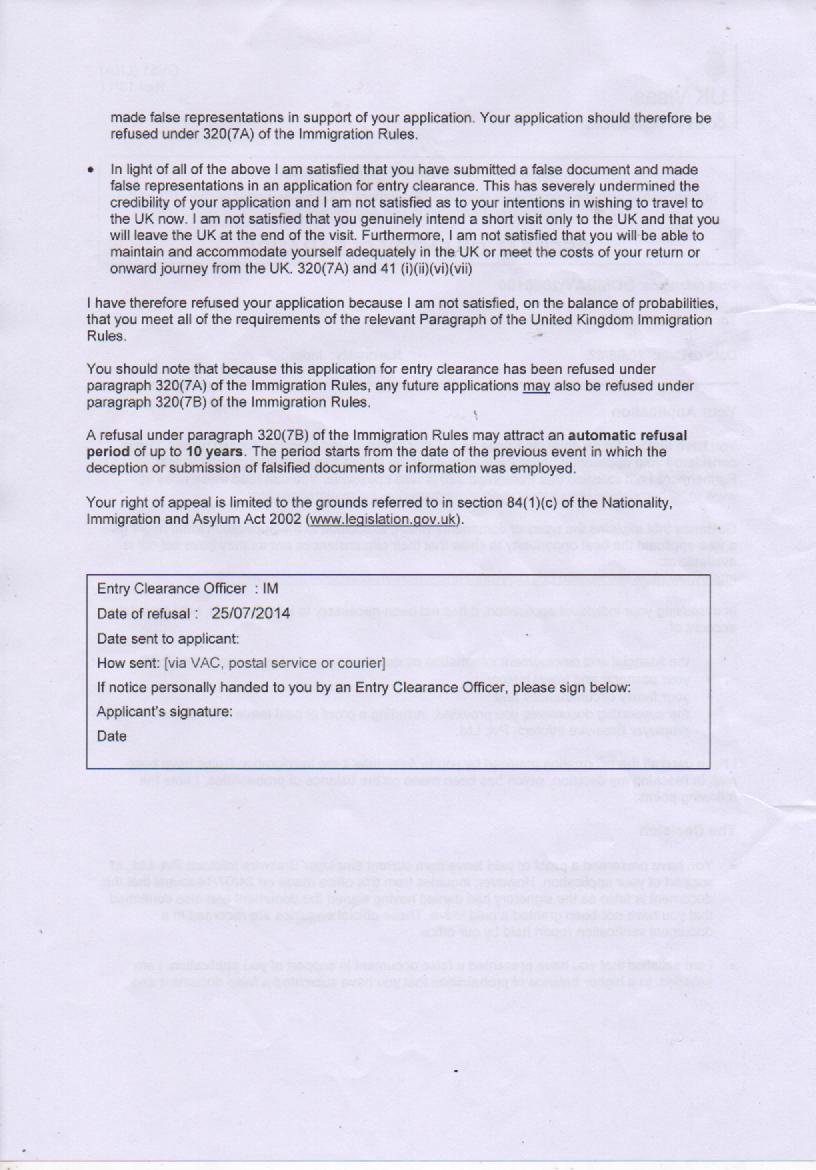 You presented a false document and were refused under Part 9 of the Immigration Rules, specifically Paragraph 320 (7A)...

This is a grave event in a person's immigration history. The UK abhors deception and treats it as an affront to their national character. Accordingly, the applicant's credibility is shot to Hell and getting another entry clearance is virtually impossible. Essentially it requires a judicial review lodged by an organisation like the JCWI and they have a backlog that goes from here to John O'Groats. The time window to lodge one by yourself has expired.

On to your questions...

That may be that they had fear of losing their employee but it was not my fault.

Perhaps it was your fault, perhaps not. It doesn't matter. Everybody in the world says it's not their fault when they get caught, and the Tribunal is numb to that argument. Deception occurs when a forged document is presented and they do not care 'whose fault' it is ("...whether or not to the applicant’s knowledge..."). Even if the employer comes forward and admit that they lied in a sworn statement, it's still your fault. Honestly, they get really upset about forged or fraudulent documents and they never forget it.

Could you please suggest if I should apply again?

(7B) where the applicant has previously breached the UK’s immigration laws (and was 18 or over at the time of his most recent breach)by: (d) using Deception in an application for entry clearance, leave to enter or remain, or in order to obtain documents from the Secretary of State or a third party required in support of the application (whether successful or not);

And 7B spells DOOM. Under this Paragraph, the ECO has the option, but not the obligation, to impose a ban. Maybe he will, maybe he won't, but the risk is usually unacceptable unless the applicant is represented by an established solicitor with a nationally recognised practice area in representing clients who have been refused for deception. There are about 5 of them and they charge fees that are heart stopping, well over a year's salary for the average Indian national. If your new company will step up to the plate and instruct one, that would be great. Visit the Law Society or ILPA to locate one.

Having your new company step up to the plate would be an beneficial change of circumstances going heavily in your favour, especially if they have sponsored previous visitors. Better still, get the head office in Stockport to instruct a great solicitor on your behalf.

how I can explain to them that it was not my fault.

As explained, they don't care, your explanation is irrelevant. But a solicitor with an established practice area in Paragraph 320 (7B) will know what to tell them. It's their job to think up exculpatory language and to put it forward in an eloquent way, it's how they make a living. I don't know of anyone who regretted instructing a member of the Law Society to unsnarl something.

Technicality: the 10 year ban was created in 2008, so we do not have the field experience of knowing their policy for what happens to an applicant when their ban has expired. We can start finding out in 2018 when the first person who was banned for deception (a spouse who had separated from her husband and didn't declare it to the IO) tries to apply. Currently it's unknown.

Minor Technicality: you were also refused under Paragraph 41 of the rules. This paragraph was deleted from the rules in 2015 by an order from the Home Secretary. It may still be out there as a curious artefact in the Home Office's archives, but it's irrelevant and you cannot benefit from the fact that Paragraph 41 no longer exists.

Patricia Shanahan asks: I think the OP is claiming that the document was valid, not forged, and therefore presenting it was not deceptive. Would it have helped if the OP had immediately challenged the claim that it was forged, and had presented good evidence of its validity?

It's really a theoretical question from the past that must be informed by the way things worked in India in 2014. As a stand-alone question, the answer relies heavily, if not completely, upon opinion. Having said that, I doubt that immediate representations would have made a big difference, but that's an opinion.

Introducing new evidence following an adverse decision is something the Tribunal has already ruled upon, and their ruling entitles the consulate to ignore new evidence. So no, immediate representations would not have been effective in my opinion.

What the OP could have done is to make a fresh application immediately from square 1, but presenting all the right evidence. This would have had a good chance of success in my opinion. At least that's what I would have advised if I were convinced the OP was playing it straight-up. I think practitioners would agree that a fresh application is the cure when there's a clear and single evidential shortfall. But the OP didn't do that, and other theoretical questions about what might have worked or not worked two years ago are outside this site's format.

In comments, the OP asks a fair question: I checked on Law Society and there are many solicitors who practice Immigration & VISA. I will try contacting them. I am aware about the fee and it should be okay with me. I will try hiring one, if you have any suggestions?

I can't suggest one because it might be spamish, but I can tell you that Sophie Barrett-Brown gets called in to give oral evidence before Parliament all the time. And Barry O'Leary meets regularly with the Home Office Policy Unit on entry clearance matters. And Sonu Vijn speaks 4 languages native to southern Asia. And Pat Saini co-chairs ILPA's Personal Migration Subcommittee. Julia Onslow-Cole has a nationally recognised practice area representing high-net-worth clients. It's not spamish because few could argue that they are not recognised industry leaders. As I mentioned earlier when it comes time to discuss fees, get ready for a shock.

Disclaimer: I have known all of them for over a decade, plus they all know each other. And as we all know it's against the Commissioner's Code to tout a solicitor for compensation anyway.

Not the answer you're looking for? Browse other questions tagged visas uk visa-refusals business-travel deception or ask your own question.

50
Warned by CBP about traveling to the US using the wrong visa, but need to go again soon
3
UK visa refused under 320(7A) (deception) in 2009. Am I banned for 10 years?
2
Ban under v3.7 appendix 320 7A UK
1
B1/B2 granted to UK resident for US visits. How long do I need to stay away between visits if I stay 6 months?
1
Should I apply for a UK visa to attend an onsite business meeting at a new job?

2
India to UK visa for business refused due to wording issues
5
UK Visit Visa refused and false allegations stated in the refusal letters. What are my options?
2
Strategy while applying for a UK visa after a refusal
12
Reapplying for a UK Standard Visitor visa after a refusal under article 320 (7a) (Deception)
1
Are UK visit visa approved if it’s refused once in the past?
0
Can I apply for an Australian visit visa within 7 days after getting refused once?
1
Should I apply again for a UK visa?
2
Ban under v3.7 appendix 320 7A UK