Acceptance of Credit Cards in Japan

I know that Japan is primarily a cash society but I've heard that they've become more accepting of credit cards lately. Question is 3 parts:

If you are not sure what kind of stores accept it or not, here is a general standard:

Japan is NOT a primarily a "cash-society", it's just that it costs a lot of money to make a contract with the credit-card company and every transition will cost ~3% for fees, so smaller businesses just don't want to do it.

Additional tip: keep a 10 000 yen bill with you ( around 100$ ), you will not easily find a place to spend it, because expensive places will have credit-card support and places where you'll need cash won't cost you that much.

Places expects foreigners paying a large amount are more likely to accept credit cards, such as:

However, you still need cash for having ramen, entering parks and temples, riding buses and for a lot of things. Make sure always have a good amount of cash with you. :)

Other cards such as Diners Club and China UnionPay are accepted, but not as widely accepted as the aboves. For instance, ticket office of JR West and bag drop counters of Peach Aviatvion does not accept China UnionPay.

Usually stripe, some new terminals use EMVs. For some places like convenience stores, no signature is required for purchase under ¥10,000. Yet, I did not find any terminals accepts VISA payWave or MasterCard Contactless.

Good answers already, but just to add my 2 yen: 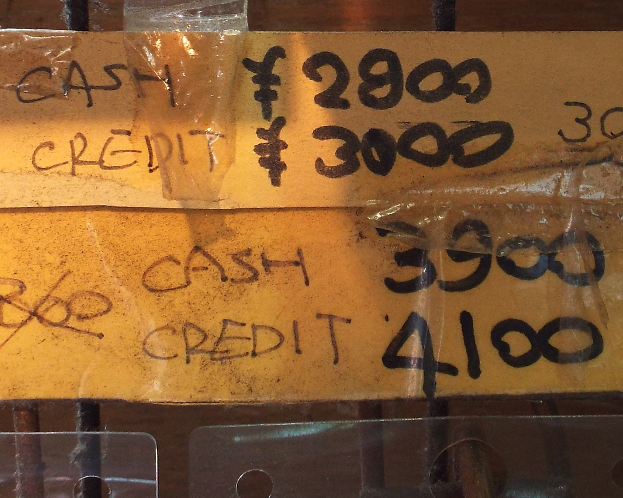 Wikivoyage has a list of banks and ATMs showing what cards they accept and how much they charge in fees (yes some are free).

I had no major problems with MasterCard for larger purchases in department stores, although lots of smaller places would not accept anything other than cash. Visa only works to get cash at 7-11, I've found no other place that accepts it.

Not the answer you're looking for? Browse other questions tagged japan payment-cards or ask your own question.

13
Are American Express credit cards widely accepted in Japan, specifically, Osaka?
8
How do I keep my cash safe in Japan?
4
How widely is Apple Pay supported in Japan?

9
Magnetic stripe or EMV (chip-and-pin) credit cards in France?
30
Tipping in Europe when paying by credit card?
13
Do PINs added to chip-and-sign cards work at chip-and-PIN terminals?
13
Credit card acceptance in Taiwan/Taipei?
32
Using US "chip & signature" Credit Cards abroad in "chip & PIN" countries
1
Chip-enabled North American signature debit/ATM card -- can it be set up for European/EMV chip and PIN?
7
How can I use Ola Cabs without an Indian credit/debit card?
16
German credit card in the US
9
My credit card has no magnetic stripe. Is this a problem in the USA?