Is the town of Continental Divide, New Mexico located on the actual continental divide?

Now I know the trail doesn't have to hug the actual divide exactly, but let's be honest the town could have been placed in an imprecise location too. So where is the divide actually around there? Are there signs/markers on or along I-40? I'll be driving through there and thought to stop to see it. Is it hard to find?

Is the town of Continental Divide, New Mexico located on the actual continental divide?

In Grants the Continental Divide Trail crosses a river. On the map you link to it can be seen about 8 km SE of the Grants label. The trail follows Route 66 at this point, and that is the road in this image (courtesy Google Maps):

The river, such as it appears in the image, is the Rio San Jose, which feeds into Rio Puerco, which feeds into Rio Grande, which discharges into the Gulf of Mexico and hence categorised as East of the Continental Divide. Upstream of the Rio San Jose are various tributaries, including Middleton Ditch, fed by Bluewater Creek from Bluewater Lake and Cottonwood Creek. Cottonwood Creek is about 20 miles west of a North/South line through the location shown above.

For sure the Continental Divide Scenic Trail at the location above is not a point where to the East groundwater water flows eastwards and to the West groundwater flows westwards. As mentioned by @Tom in a Comment: The Continental Divide Trail does not follow the Continental Divide exactly, rather it follows it when practical, follows the best alternative when not. When in 1962 the proposed route was marked out by the Rocky Mountain Trail Association blue cans were nailed to trees – this was not a surveying activity but one to display, to the Forest Service amongst others, what was being suggested.

If what little water falls merely sinks into the ground or just puddles until evaporated the direction of flow is indeterminate. For a given longitude the gap between a discernible flow into the Atlantic as opposed to a discernible flow into the Pacific may be miles wide. A further complication is that the sources even of major rivers can be very modest burns and creeks, the courses of which in western New Mexico may be dry for much of the year.

This is the sign @phoog provided a link to: 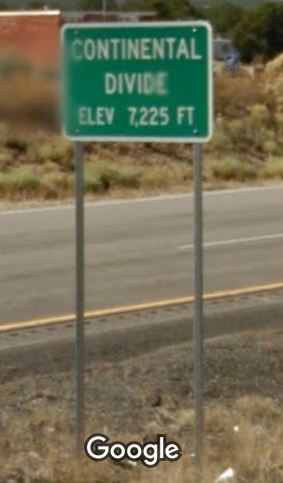 It is not double-sided, hence it seems strange to me that there appears to be no corresponding sign for traffic in the opposite direction. Is whoever placed the sign avoiding a decision about the width of the divide in this area?

A few hundred feet further on there is another sign, which can be seen in the bottom right of the image (courtesy Google Maps) below, at the "Top of The World" gift shop:

Shown in more detail by Laurence and Jessica at Finding the Universe on the left and on the right by Mark Hinsdale:

Here the elevation shown is 50 feet higher than the road sign. So, the township certainly lays claim to being appropriately named though so far there is no corroboration here. A map of rivers in the area (and it seems all maps of the area have their own opinions about these!) shows a 'gap' through which I have dragged a highlighter, separating rivers that flow into the Pacific from those flowing into the Atlantic. The two on the left are Puerco in the middle and Pescado lower down. These join up and via Little Colorado River feed the Colorado River, which discharges into the Gulf of California:

The best answer to this question would be, it's close enough.

The things is, the Continental Divide is not a geographic line*, it's a hydrological concept that separates the various eastern and western watersheds.

*The peaks of various ridges are a enough of a line but there are plateaus and valleys where it's much less obvious. The point is that while it is described as a line on a map, the line does not originate in geography, rather hydrography.

Not the answer you're looking for? Browse other questions tagged usa landmarks geography new-mexico or ask your own question.

8
Which place(s) are the first to cross into New Year?
6
Re-entering USA in the VWP after travelling to Mexico
0
Entering Mexico and re-entering the USA with visitors visa
4
Applying for new B1/B2 visa with new passport, the birthday on my new is different from my old
6
What are the actual rules for legally visiting Stull Cemetery?