Dingo fence - how to visit?

Although being "only" a fence, it is unusually interesting, because of its extraordinary purpose and length. 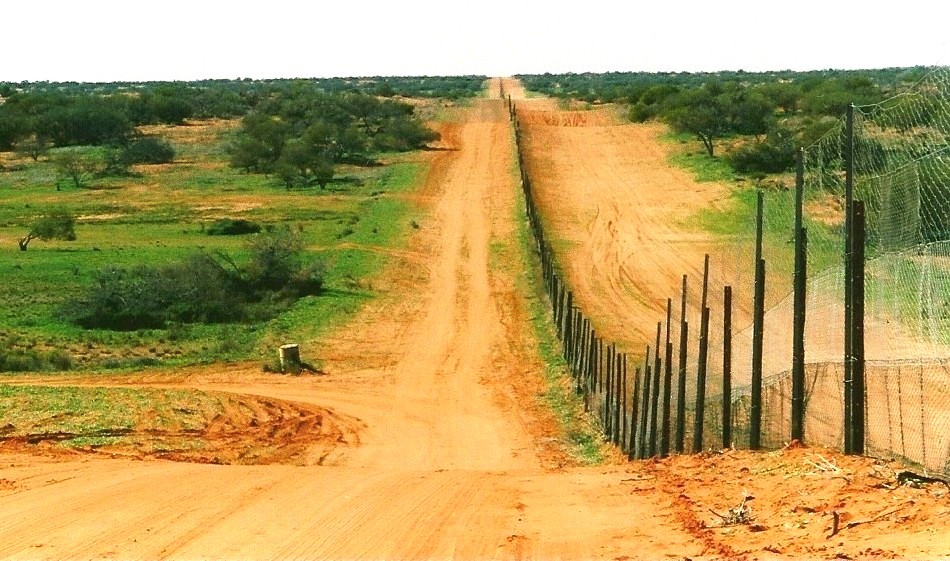 What are the most interesting parts of the Dingo Fence? Are there any bus/train rides along the fence? How to get there from Sydney on budget?

It's probably hard to describe any part of the Dingo Fence as being the "most interesting" given that each metre of it is almost exactly the same as the other 5,613,999 metres of it.

It is, at the end of the day, a fence. Not dissimilar to any other fence you'll ever see, with the possible exception of the fact that it's relatively high (180cm, or around 6 feet high above ground) and also runs about 30cm underground - although of course you can't see that.

Of course, it's also very long - but fences have a tendency to be very long in much of Australia, and from a visible perspective there's not a lot of difference between a 1 km long fence and a 5,614km long fence.

However if you do want to see it, the obviously place to start is, well, at the start! That would be Jandowae in Queensland, about 250km by road west of Brisbane. Jandowae has a small number of tourist items related to the fence, including some Dingo statues, and a sample section of fence in town.

Unfortunately I really have no idea how you'd get to Jandowae without a car. There is a twice-weekly train service, and daily bus services, to nearby Dalby and Chinchilla, but both of these are still about 50 km away from Jandowae.

Australia has so many brilliant places to visit - I really wouldn't be putting this one anywhere near to the top of the list, unless perhaps you happened to be in the near vicinity and looking for something to do.

Not the answer you're looking for? Browse other questions tagged budget australia landmarks or ask your own question.

15
Places to stop off along the Sydney to Brisbane railway?
9
Visiting Daintree Rainforest on an budget
9
From Here to Timbuktu - how do I get there?
7
How to visit attractions in Tasmania without a car?
4
Cheaper alternatives to travel to Hokkaido?
9
How can I work out the price of a UK bus fare online?
8
What is the cheapest and fastest way of traveling between Liege and Paris with deterministic travelling times?
5
What's the cheapest stable route to cross the Pacific?