What are the visa rules for US speakers, at UK conferences, who may be getting paid?

In the last few days, a friend-of-a-friend who was due to give a talk at a tech conference in the UK was denied entry at Heathrow and sent back. Their full story is blogged here. It seems that, in the last few days, the gov.uk guidance has been changed. (Compare the screenshot from this series of tweets from the affected person with what's shown today)

Understandably, with a comparatively well known tech speaker being turned back at the border before a talk, there's been a lot of "WTF"'s and "surely that's not right" on social media from those in and around the UK / US / EU tech scene.

Rather than rely on bits of www.gov.uk which appear to change quite often at the moment (possibly related to many of the people attending the conference in question having the personal phone numbers of people working on the gov.uk site!), I was wondering what the rules and guidance actually said?

If you hold a passport from one of the countries that normally entitles you to request "leave to enter" on arrival in the UK, and you're coming over to give a talk at a conference, what are the rules on if you need to get a visa in advance? And does it vary depending on if the conference organisers are paying for your flights/hotels or not? Or if they're giving you a small fee or not? Or if the conference organisers are a UK or EU registered company?

The rules have not changed (more about that below) and based upon your friend's narrative it was a fair cop. She was outside of the rules, no question about it, but this could have been handled with a better outcome and she could have been admitted. Based on her narrative they gave her about 4 chances to turn things around and apparently they all but bent over backwards (they were a whole lot more civilised than the other removals in our archives). She did not avail herself of those opportunities and instead dug herself in deeper. Now matters are worse. 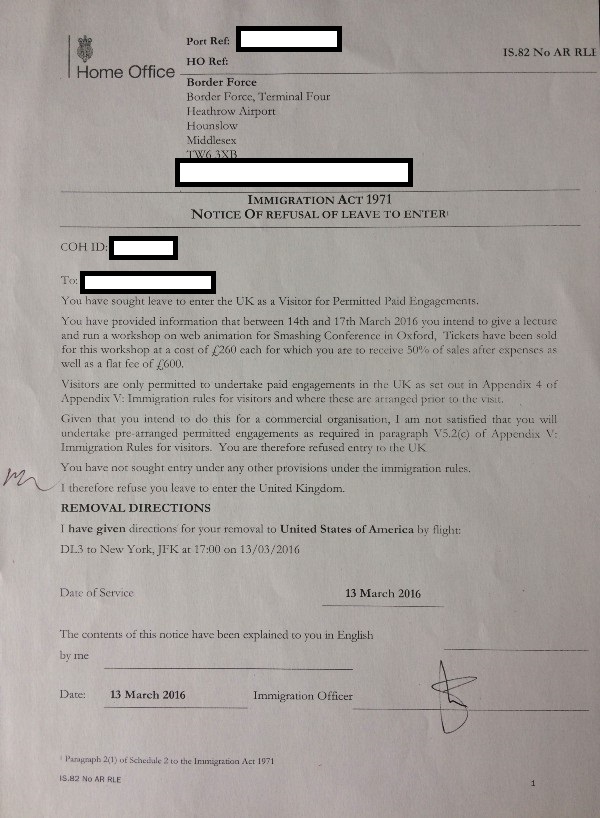 Your friend was refused leave to enter under Part 9 of the Immigration Rules; all removals from port use Part 9 of the rules (or its restatement in Appendix V of the rules). The removal notice does not cite the specific paragraph/subparagraph but it will most likely be Paragraph 320 (1)...

(1) the fact that entry is being sought for a purpose not covered by these Rules;

Your friend sought entry as a non-visa national who was making a short visit to the UK and so Appendix V of the Rules was engaged. These rules were drafted in the spring/summer of 2014 in a closely knit back-and-forth consultation between the Home Office and various members of the UK legal community. All told it took about 4 months and nobody on either side of the fence wants to do it again because it is too much agony. The rules were enacted in the Immigration Act 2014 and activated in April 2015. They have not changed since that time.

Specifically, your friend sought entry to speak at a conference (fee or honorarium or expenses-paid or whatever is all irrelevant). This is an activity that is not recreational and so "Visitors Appendix 3: Permitted Activities" comes in to play. What she proposed to do isn't found in the list of permitted activities and that's where she hit a rough spot...

She was placed in one of the mixed gender detention rooms and they gave her another interview (or more precisely, another opportunity to turn things around). That was her chance to get a temporary admission for a period of usually 2 - 7 days. This didn't happen.

Through what I count to be three separate interviews one of which was with a Chief IO. While a CIO must approve each removal, it's rare for them to engage the person directly. Something went terribly, terribly wrong and they were upset. It's easy to put all of this on the Border Force as demonic creatures given to sadism, but that proposition becomes awkward against the fact that they land 10+ million visitors a year without incident.

She was served an IS82, which is the form they use when someone does not qualify for leave-to-enter AND their behaviour is inappropriate. It gives them the option, but not the obligation, to have her placed on the Home Secretary's exclusion list (that's a bad thing). They removed her to NYC instead of her base on the USA's west coast. They didn't have to do that, there are flights out to the west coast all the time, but that was just icing on the cake. Minimal compliance. 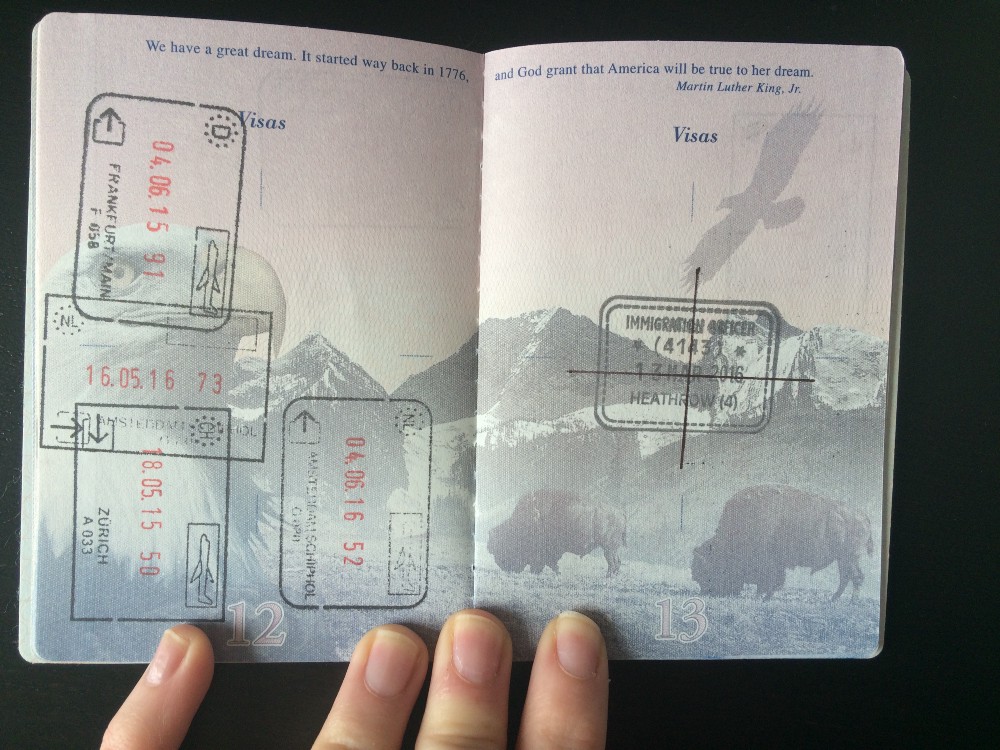 She has a removal which is computer linked to her biometrics, but worse is what's in her transcript. It cannot be expunged, but it can be relatively 'cleared' or mitigated by obtaining an entry clearance. It costs GBP 87 to apply for one, but I would emphatically recommend instructing a member of the UK Law Society with a practice area in prior removals who can word-smith an eloquent explanation.

If you hold a passport from one of the countries that normally entitles you to request "leave to enter" on arrival in the UK, and you're coming over to give a talk at a conference, what are the rules on if you need to get a visa in advance?

If what you propose to do appears in the 'Permitted Activities' section of Appendix V, you can get leave-to-enter at the border. If you qualify for the 'Permitted Paid Engagements' rule (also in the same place), you can get leave-to-enter at the border. You will need to engage with the IO in a landing interview to be sure you qualify, so bring your stuff.

And does it vary depending on if the conference organisers are paying for your flights/hotels or not? Or if they're giving you a small fee or not?

Not really. It's very common for such people to have their expenses paid. In theory you are not supposed to collect a fee; I don't think they pay a lot of attention to honorariums and the like (unless you do something to get them upset).

Or if the conference organisers are a UK or EU registered company?

No. The organisers need to be UK-based. Minimally that means there's somebody here who is operating under a 'management scheme' (in whatever definition you can provide that can be called a 'management scheme'). Again, personal impact and articulation skills. It's just that simple.

Note: it's my own estimate that roughly 1 out of every 2,600 non-visa nationals arriving from North America will be refused entry at a port. People have said here on this site that this figure is too remote to worry about. Read it here. I think comparison with lightning is a flawed argument. When a removal happens it's a big time disruption, so it's best practices to be prepared for your landing interview.

Note: the Chief inspects the detention facilities at LHR and etc to assure they are up to scratch. They are not comparable to the diplomatic lounge in IAD, but they are not the hell-hole of Calcutta either. The Chief’s latest inspection report as per their web-page was published 16th July 2015.

About the example, and why it doesn't show what it purports to

The refusal was based, at least in part, not on the speaking at a conference. If you read the refusal notice, you will note that the person in question was, in addition to giving a conference talk, running a workshop (IE carrying out teaching duties) for which:

Tickets have been sold for this workshop at a cost of £260 each for which you will receive 50% of the sales after expenses as well as a flat fee of £600.

As such, this refusal should not be seen as ruling on if (or not) it is OK to come to a conference in the UK and receive fees. Instead, it's more about whether you can be a paid teacher (even briefly) in the UK, while entering as a visitor (be that on a visitor visa or visa-free)

Beyond this, looking at the Visitor rules (which haven't changed, although the summary advice on gov.uk may have, although again note that the blog post never shows the result of clicking through on "permitted paid engagements") say that permitted activities (without being paid) are:

1 The following are permitted paid engagements:

From this, we can see that giving a paid talk at a commercial event does not appear to fit within this space. In practice, I understand that something of a blind eye is turned towards speakers whose expenses remunerations turn out to be more than the expenses of the trip really were (although the problem with a "blind eye" is you never know if or when it will regain sight). But it seems the only occasion in which one could receive an explicit "fee" for speaking, and not be in breach of the visitor rules, would be if they were invited by a UK academic, research or arts institution.

There's some confusion about what is meant by

understandably. I can't speak for exactly how this will be interpreted by UKVI, but as a UK native, my understanding would be that it includes:

and that it would not include any clearly for-profit events companies, or simply private companies choosing to host a conference.

3
Does a US national need a visa to teach a paid training course in the UK?
51
Traveling in Europe Solo - 18 years old. Feasible?
14
If denied entry to EU, what US city do they send me to?
37
What's the law about body scanners in EU? Am I legally allowed to refuse?
11
How long can I stay in the UK?
9
UK conference speaking: what if it's my job?
4
What are the visa rules for UK conference speakers, at US conferences, who may be getting paid?
9
What proof of expertise do UK immigration accept for conference speakers?
5
When am I eligible to return to UK post Youth Mobility Visa?
2
Canadian SME working in UK for 2 weeks
See more linked questions

19
Is it risky to wear a name tag in public in an unfamiliar city?
8
Can you go to a Conference in Canada on a Visitor Visa, or only a Business one?
9
What proof of expertise do UK immigration accept for conference speakers?
5
Entering UK for two short visits within a month (non EU)
1
France Business Visa For Attending OpenSource Conference
4
What are the visa rules for UK conference speakers, at US conferences, who may be getting paid?
0
Uk Visit Visa Rejected, Should i reapply?
2
What type of visa should I apply for attending an academic conference in France?