Banana hammock on a domestic US flight? [closed]

OK, so I know this sounds ridiculous, but I couldn't find anything authoritative online about this. And indeed I'm serious.

Is there any official reason to believe it's prohibited to wear a banana hammock on a domestic US flight operated by Southwest?

I couldn't find anything like a dress code published by the airline.

For the uninitiated, this is a banana hammock: 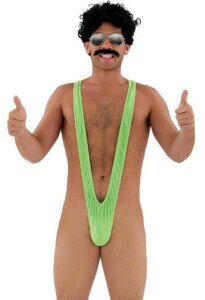 While digging for an article about the woman kicked off the JetBlue flight this year for wearing the burlesque shorts I found this story Here’s Why JetBlue Can Legally Kick You Off a Plane for Wearing Booty Shorts which has in it:

So what gives Southwest, JetBlue, or any other airline the right to boot you off a flight? It comes down to the “contract of carriage,” a legal document that spells out the rights and responsibilities of the airline and its passengers. Whether you realize it or not, you agree to that contract whenever you purchase a ticket from an airline. In JetBlue’s case, it states that the airline can refuse “persons whose conduct is or has been known to be disorderly, abusive, offensive, threatening, intimidating violent, or whose clothing is lewd, obscene, or patently offensive.” Most other carriers use very similar language.

The story links to the JetBlue Contract of Carriage but as per the quote Southwest will have a similar contract.

So the answer to your question is yes - they can kick you off the flight. But I am guessing that you would't even make it to the gate wearing a mankini.

Now the fun legal question is if you can be bound by a "contract" that you didn't know existed!

I consider myself tolerant, but I would be uncomfortable sitting next to a guy 'dressed' like that. I guess that the majority of other passenger will have stronger feelings about it, and some will voice them unambigously to the airline personnel. Except on a mostly empty flight, chances are probably zero to be allowed.

I also don't get why anyone would want to do that. It seems like simply pushing the limits for the fun of it, competely ignorant of cultural standards and other people's feelings.

Not the answer you're looking for? Browse other questions tagged air-travel domestic-travel dress-codes southwest-airlines or ask your own question.