What is San Francisco's most famous church?

I have been to Hagia Sophia, Notre Dame and La Sagrada Familia, so I was wondering what the most famous church in San Francisco is ?

You have named some of the finest such buildings in the world. San Francisco has some attractive religious institutions to be sure, but nothing I would consider truly world class or on the same scale as a church that has been under construction for 134 years.

That said, here are a few sights of interest though (inspired partially by this list, which has some others worth considering). I wouldn't really count any as a must-see for a tourist, but if you're interested in church architecture or want to visit one anyway, there are some good options. All these institutions have websites that list more detailed information, hours, scheduled services, contract details, etc... 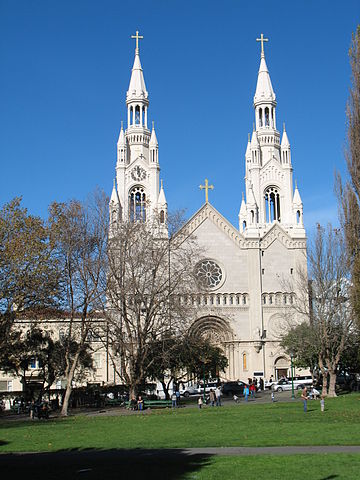 It has been featured in movies and has a beautiful interior as well. 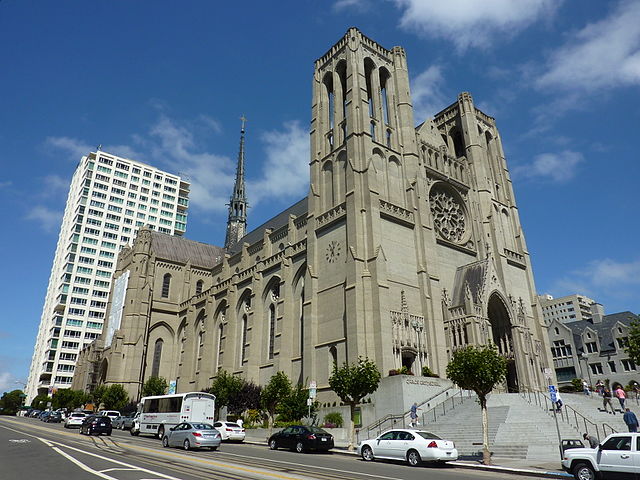 This is an Episcopal Cathedral, so I'm not sure if it is suitable for your religious needs, but it's a stunning building. One fun feature are the labyrinths, which are built for meditative walks. Come by Cable Car if you want to arrive in style, or the 1-California bus if you don't. 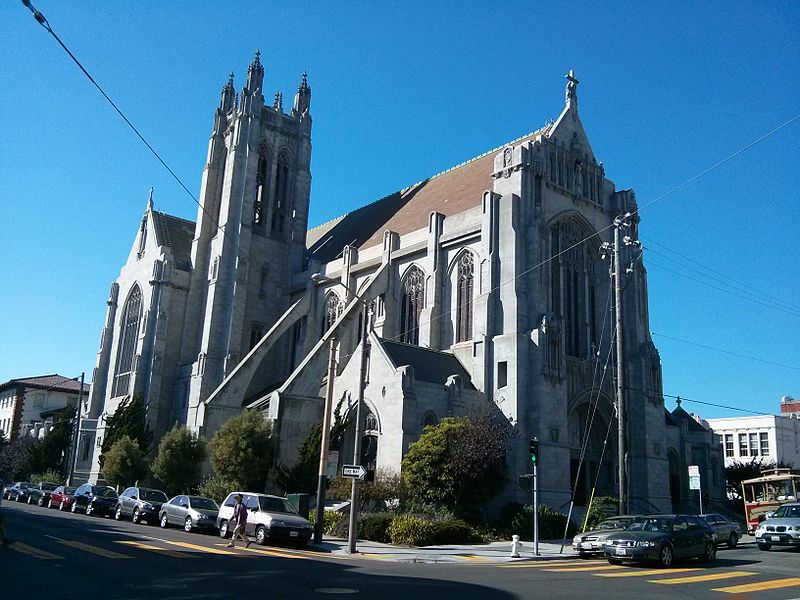 Gothic-style Catholic church with a colorful and detailed interior. 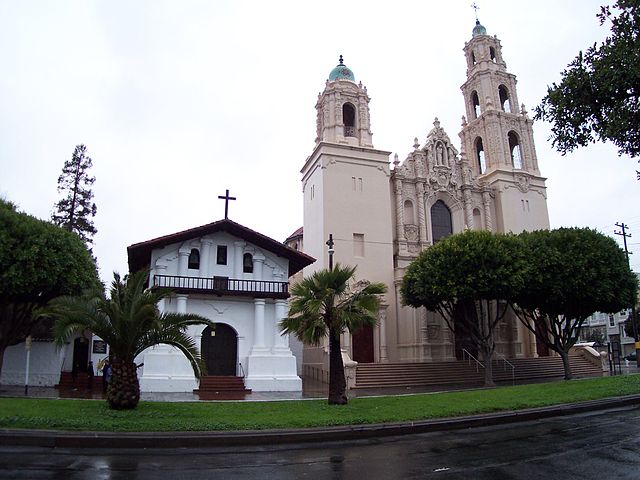 The namesake of the Mission District, this isn't quite as significant for the architecture but rather for the history: it is the oldest surviving structure in San Francisco and the site of the original Spanish Mission in San Francisco. It, along with the larger Basilica next door, continues to operate as a Catholic parish church.

(I couldn't find a free image suitable for embedding.) As you mentioned that you are Greek, it's fitting to include this one, though I've never visited. The interior decor looks quite striking. It is out on Brotherhood Way in the far Southwestern cover of the city, making it potentially a bit of a trip to reach depending on where you start. 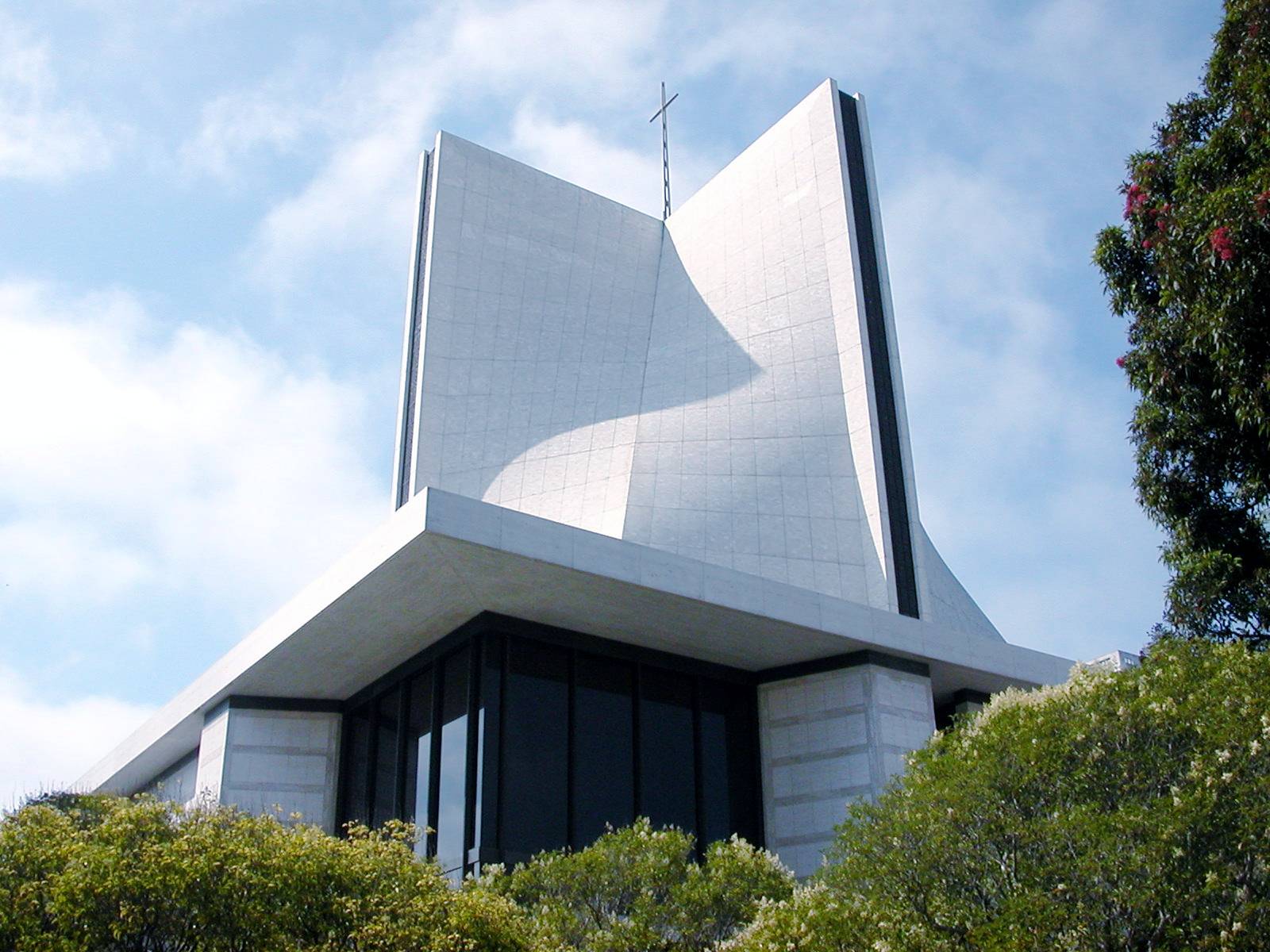 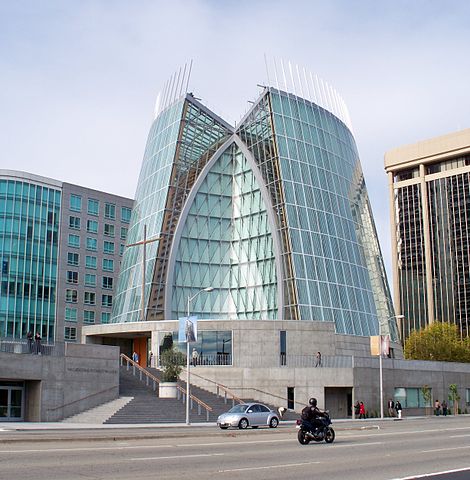 For something different, you could also consider one of the Bay Area's modern cathedrals. San Francisco's Cathedral (Saint Mary of the Assumption) may be mocked by some locals as the "washing machine church" or "Our Lady of Maytag," as it looks like an agitator from the sides (it is, of course, a cross from above), but it is a notable structure for better or for worse. Across the bay in Oakland, the Cathedral of Christ the Light is comparatively new and was the first cathedral built entirely in the 21st century, with lots of glass and natural light.

The Gothic-revival St. Patrick's church is nice and dates back to 1851. It is a far cry from the Sagrada Familia, but I mention it especially because it is quite convenient to Union Square, Muni Metro, and BART lines.

Also note Glide Memorial Church, part of the United Methodist Church, which isn't a whole lot to look at physically, but features an extraordinary gospel choir, plenty of spirit, a commitment to social justice, and prominent programs to feed and help the homeless (and they can always use more volunteers).

To use a decent empirical measure of popularity, Grace Cathedral is the highest-rated church in San Francisco on TripAdvisor, with 700 reviews averaging well over four stars.

The cathedral is famed for its mosaics by Jan Henryk De Rosen, a replica of Ghiberti's Gates of Paradise, two labyrinths, varied stained glass windows, Keith Haring AIDS Chapel altarpiece, and medieval and contemporary furnishings, as well as its forty-four bell carillon, three organs, and choirs.

Here's a link to it on Google Maps, where you can find its location in the city and get directions.

I will post what I eventually did, since I believe that the route one follows to go these churches plays a significant role too, and most importantly, a personalized description is always useful!

I will upload my pictures in Travel:USA | G. Samaras.

So, could I guy like me be impressed by a church in SF? Hell yeah! How?

Cathedral Saint Mary of the Assumption

That's something unique for me.

So here is the plan we followed (Note: We went by foot, it took several hours) on Google Maps, παραμονή της Παναγίας, 14 Aug 2016, Sunday:

The route we followed had some nice places, which a person that has gone places, should pinpoint easily, given that he has his eyes open. Many other churches were found around, with a Chinese one, being the most distinctive, it was a building like a big house, with a triangle as a terrace.