Power plug in Ireland: is it the same as in the rest of Europe?

What kind of power plug is used in Ireland?

Is it the typical plug used in most of Europe? Or is it the British one?

(Could you attach or link to a photo so I can make sure?)

To be more specific, From Wikipedia:

This is how it looks: 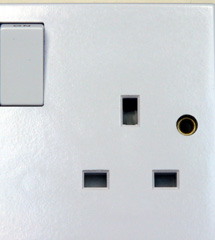 In the United Kingdom and Ireland, there is a two-pin socket for use with electric shavers in bath or shower rooms.[18] It derives from the unearthed version of 5–6 A British plug and it has 0.2 in (5.08 mm) diameter pins 5⁄8 in (15.88 mm) apart. The sockets for this plug are often designed to accept unearthed CEE 7/16, US or Australian plugs as well. Sockets are often able to supply either 230 V or 115 V. In wet zones, they must contain an isolation transformer compliant with BS 3535.

As others have mentioned, it's the same as the UK.

Ireland & the UK are quite culturally close (and were the same country until 1922), so anything bought in the UK would have to work in Ireland. There are numerous 'high street' UK chains operating in Ireland selling the same merchandise.

Not the answer you're looking for? Browse other questions tagged europe power ireland or ask your own question.

14
Ireland power plug and concern about 230 V vs. 220 V
8
What legal documents are Italian citizens supposed to carry when traveling to Ireland?

7
Adaptors that work in the various electricity outlets in Europe
18
Are there any countries where modern devices that take 100-240V AC power won't work?
8
How can I use a US Xbox 360 in Beijing?
5
Ground on “type E” plug adapter
2
Adapter for a Surface tablet in Europe
14
Ireland power plug and concern about 230 V vs. 220 V
11
Will this travel adapter that supports “more than 150 countries” work in South Africa?
6
Which kind of appliances can one connect to electric sockets located in an airplane's toilet?
8
Is it safe to plug a power strip into a voltage converter?