Are there large US-style supermarkets in France?

I'm in Paris, and I've stopped into a Monoprix and a Carrefour, and in both cases compared to what I'm used to in the US the selection was quite small. It was just a fraction of what American stores offer in variety of goods and brands.

Is this normal throughout Paris/France, or am I just shopping at the wrong place?

The French seem to go for very small and massive stores. There are some mid-size stores but these seem rather rare. In fact, the French are known around the world for exporting their retail chains and hypermarché [hypermarket] concept. These are most similar to American super centers, but genearlly have a focus on food and are between the size of an American supermarket and an American super center - they tend to be around 110,000 square feet (vs. an average US supermarket around 60,000 square feet).

In Paris you can find Hypermarkets including Auchan, Géant Casino and Carrefour Hypermarché further out from the center around and outside of the Boulevard périphérique. (Note Casino and Carrefour also use their brands for smaller format stores so the adjectives are key to find the format you're looking for.)

Also note that there are generally many speciality shops and market vendors in France, customers who are looking for variety or quality tend to frequent those instead of the often cheaper chain stores.

Real estate in Paris is too expensive for really large supermarkets, you need to get outside the dense part of the city (which - for Paris - is quite some way out). You wouldn't expect a quarter-square-mile-supermarket in Manhattan, would you?

Generally, there are large supermarkets in France; less than in the US, but sufficient. Just remember to check the main routes out of a city, and far enough from the often centuries-old city centers.

Hypermarche is one giant-shop chain; Intermarche is typically smaller; Auchan is another giant-size chain.

Of the Top 100 largest supermarkets in France, none is inside Paris. As highlighted in others' answers, this is because of real estate pricing.

So if you are looking to go to a large supermarket, you need to get outside of the Boulevard Périphérique. Here is the list of the largest supermarkets in the Paris region:

The largest in Paris is probably the Carrefour Porte d'Auteuil (16e district) which is around 5.000 sqm.

Lidl, Leclerc, Carrefour center (or Hypermarché, they change names a lot, it was Center back in 2012) (not Carrefour City or Carrefour market, those are small grocery stores) are slightly similar to your supermarket concept, but don't expect anything similar to Wal-Mart or a grand mall.

Lidl and Aldi are German brands established all around Europe, more importantly in places with German-like food habits (England, Ireland, Netherlands) or in places where Germans go on holidays (Spain, France). 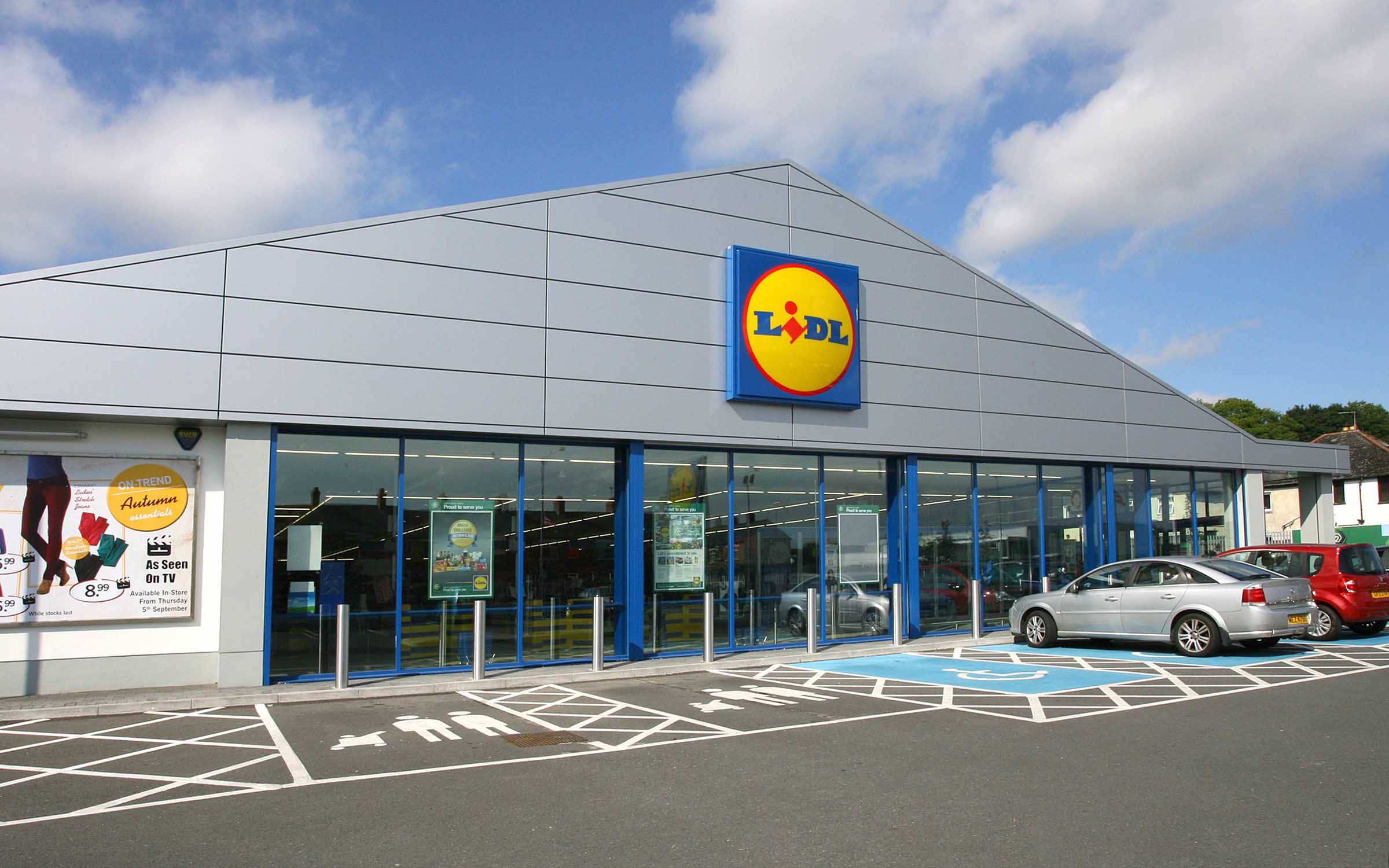 Big commercial surfaces, Carrefour center holds the largest product variety, including clothing, big electronics, bikes, car accessories, books, and also food. They tend to have 3rd party stores outside the "market surface" but inside the building. 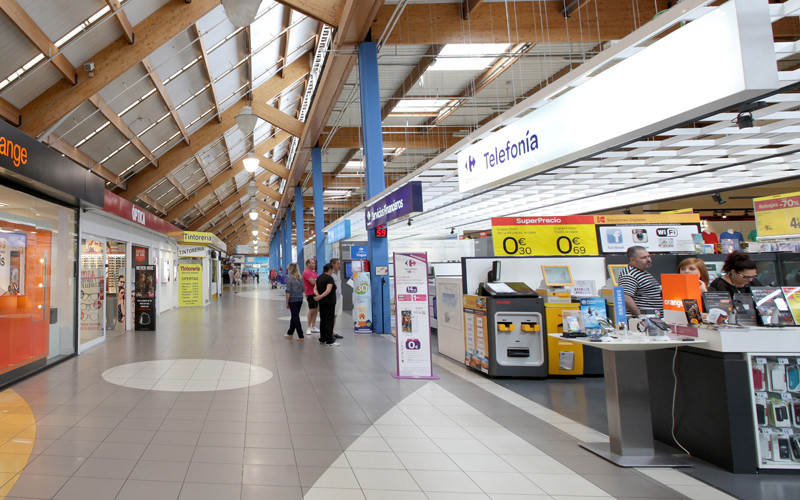 Similar to a Carrefour, they also tend to have gas stations 20 to 30% lower than mainstream gas stations, and usually have 3rd brand (not E. Leclerc) stores inside the surface, like a bakery or a butchery. 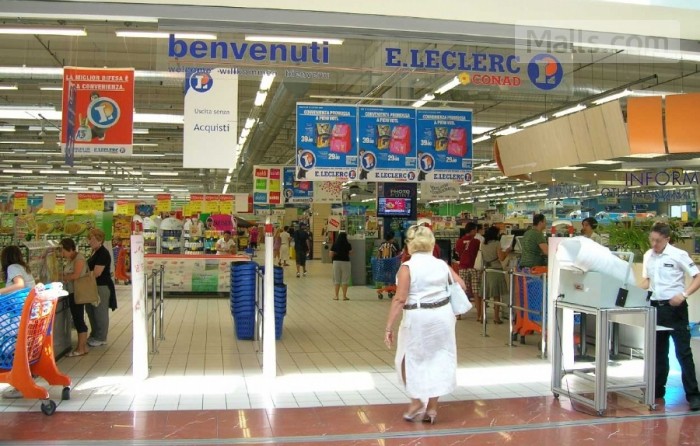 Paris¹ is different from the rest of France, including the Paris suburbs².

Outside Paris, you'll find supermarchés (large) and hypermarchés (larger). Depending on what shops you go to in the US, your expectation may be closer to hypermarchés. Hypermarchés are generally located somewhat outside of town, hard to access without a car. Supermarchés are found both in town and outside. A typical grocery shopping experience outside Paris is to drive to a large supermarket and pick up food for a month, and then walk or drive to pick up the odd perishable or forgotten item, possibly from different stores.

Paris has no hypermarchés and relatively few shops that non-Parisians would call supermarchés, but a lot more smaller stores that mostly sell food (supérettes). Due to limited space, most stores only sell a few brands of each product. A typical grocery shopping experience in Paris is to walk to a nearby store once or twice a week (in the big city, who has space to store food for a month?). From Paris, you can drive, bike or even take somewhat inconvenient public transport to reach hypermarchés in the suburbs, and you'll find more choice than in any one Parisian shop (but not more than in the shops within a 10 minute walk of where you live in Paris). Hypermarchés are cheaper, but from Paris, they're hardly worth the hassle.

All major brands of supermarché and hypermarché deliver in large enough towns, including Paris and most suburbs. The prices and selection are not always the same as in store.

One thing that's different between France (both in and outside Paris) and other countries I've been to is that fresh produce in supermarkets is generally inferior and not particularly cheap. Get your fresh fruit and vegetables from the street market (in Paris, there's a street market within walking distance every morning except Monday; in small towns you may be restricted to one or two market days a week). Get your bread from a bakery. Supermarket meat is usually ok.

¹ I use the local definition of “Paris”, i.e. the Paris municipality, which is basically the part inside the boulevard périphérique, i.e. arrondissements 1 to 20. Other municipalities in the Paris urban area are the Paris suburbs (banlieue).
² Maybe a few other large towns are more similar to Paris. I don't know, I've never lived in a large town in France apart from Paris.

As you're in Paris, and may well not have a car, one that's worth a mention is Auchan Val d'Europe (Marne-la Vallee). Many large supermarkets in France are a fair walk from major public transport though may be served by local buses. It's a few minutes walk from an RER (regional train) station on the line from Paris to Disneyland Paris (in fact part of the same development). There's also a rather large shopping centre on site. According to the link in Olielo's answer it's 16 000 m² so up there with the largest. (It's also just under2/3 the size of the largest Walmart in the USA).

This is quite normal in Paris, less in the rest of France. Small shops like the ones you can find in Paris tend to disappear everywhere else I've lived.

As Aganju mentionned the real-estate in Paris is ridiculously expensive, which drives large supermarkets away from settling in the city center.

Another thing that both helps explain and completes this explanation is the fact that the city center is quite stuck in terms of constructions because of historical and legal reasons. There are limitations on where a building can be built and how big it can get. For example, if the width of a street is P then the façade of a building on that street can't be taller than P + 2 to P + 3 (source). Plus, there are many protected monuments in Paris (you can search them online), which puts even more constraints on the supermarkets to run a profitable business.

I think these are the reasons why Paris is one of the last place in France where small shops are still competitive against large supermarkets.

There is a fairly large shopping center at Place d'Italie (called Italie 2: www.italiedeux.com ). There is a large supermarket (Carrefour Market) which has food, cleaning supplies, some household items (such as spare lightbulbs) and other things. It also includes a "Bricorama" (hardware store), several fashion outlets (clothing, shoes, jewelry), a "Fnac" (books and electronics)... Whatever you need, you are almost sure to find it there.

Not the answer you're looking for? Browse other questions tagged france food-and-drink shopping or ask your own question.

20
Are there ways to keep long-distance land transport costs down in France when not planning in advance?
7
Long (14-hour) layover in Beijing on a Sunday, will I be able to do some shopping/tourism?
7
Where to buy cheap generic camping gear in Kuala Lumpur or Singapore?
7
Renting a flat in Lille for a few months - options beyond Air BnB?
6
Is there a home of New York-style pizza in NYC?
1
Sending a parcel from the UK to France, taxes?
9
How does the "10 days within 2 months" Eurail pass work?
1
In france, when are supermarkets closed or close early for the christmas / new years period (2019/2020)?