Formalities at departure airport for Chinese 72 hour transit without visa

Some Chinese cities offer a 72 hour visa free transit for many nationalities. I did this a few times with success. However, especially if starting with another Europe-internal connecting flight check-in agents first refuse to check me in but a pointer to TIMATIC usually does the trick. On the Chinese immigration end the program seems pretty well known, so far it went all without a problem.

Every single time I arrived at the gate for the China-bound flight I was asked sternly for my visa and then lectured that I need one without exception. After explaining the situation, the workers then phone a few people before they ease up and ask for a print-out for the connecting flight (even if booked on the same ticket). After that they take at least ten minutes to do something on their computer before returning my passport.

They then proceed to tell me that I should have already said something to the check-in agent (which I've always done – with the exception of Stockholm where check-in is done via kiosks and the agents refused to talk to me because I had no checked baggage but already a boarding pass). The whole experience is quite stressful even though I know my itinerary is well within the rules.

Is there something I can do to smooth out the process? I also don't want to arrive at a Chinese airport and be turned back because the airline forgot some formalities. I'm pretty sure this rule is not so-well known among airline workers based on what I have experienced. I can only guess what happens next time, where I will do an (allowed) 82 hour transit under the 72 hour transit program.

Somewhere I read that for Beijing all formalities can be done after arriving at Beijing airport but for all other cities advance notification by the carrier is required. Is this true?

To me it seems at the gate before boarding is too late based on the reactions I got (I tried to be there early). But nobody cared before that point. Does the airline actually needs to supply advance information to China? How to bring them to do this without making me feel that I did something wrong?

I have obtained this visa-free stay in Shanghai in Mar 2016 (there you can now get 144 hours). At the departure city I told the airline agent I was going to stay there for a day before going further, and they didn't care. What they did care, however, was to make sure 1) you have a direct international ticket out of China within allowed period (this means you cannot have another connection in China) and 2) this ticket made the trip true transit. Giving them another ticket (which was on a different airline) was enough for them to clear me through.

Then, once you arrive at the airport, you go to immigration, and tell them you want a transit stay. They will want to see your connecting ticket, hotel reservations (if you're staying overnight - note that your stay area is limited, and you cannot for example go to Chengdu and stay there) and will stamp your passport with a nice stamp like that: 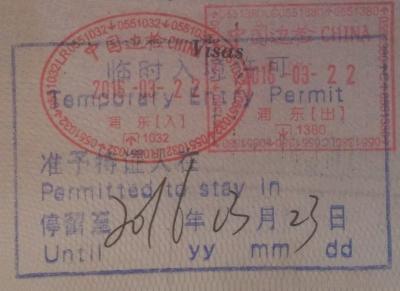 Note: this assumes you haven't got in trouble in China before, have never been refused a visa to China, and not looking like you're going to bring trouble, such as wearing a Falun Gong or "Free Tibet" t-shirt.

14
Is there a transit visa requirement for Chinese airports?
4
Canadian wants to exit and re-enter Beijing without a visa, during 72 hour TWOA (Transit Without Visa)
2
Do I need to show/fill-out any special documents for Philippine Air if traveling to China for 72-hour Transit Visa?
3
Am I allowed to travel without visa into China via transits?
1
Do I need a China Visa for Taiwan China Japan flights booked on different airlines?
2
Are there any special requirements to utilize the 144 hours Chinese Transit Visa?
3
Can you get a Chinese tourist visa without an arrival date?