Wonder how long would it take to clear the immigration at T3 on at 7pm on a mid-October Sunday. I will arrive from Gibraltar and have another connection flight at T4 with almost 3 hours in between. I worry that I may not have enough time to connect given my flight is 15 mins after an A380 from Dubai and arrive at the same time as another Garuda flight. I can save a bit of time once at T4 as I have Fast Track access. I am struggling if I should only take hand luggage but I will lose the fun of alcohol shopping in Spain.

The OP doesn't say who they're travelling with or where they're going, so some speculation is in order.

There are a limited number of flights departing from T4 around 10pm and all seem to be departing to the middle east or far east and no domestic flights. The connection process for any of these will be similar, so choosing one at random we can plug in BA491 GIB-LHR connecting to QR016 LHR-DOH into the Heathrow flight connections planner: 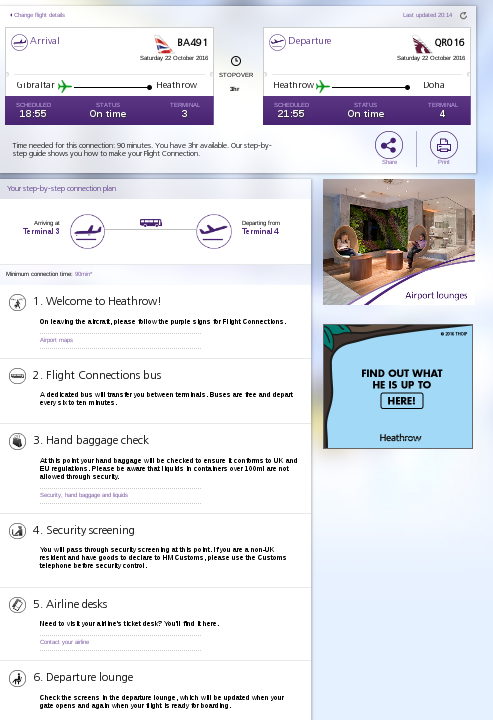 As pointed out in comments, providing this is all on one connection, there is no immigration check at T3 and only security screening at T4 for which you have fast track access. The airport guide suggests the time needed for this is 90 minutes and 3 hours is very comfortable even given a delayed arrival from Gibraltar.

If you're not on one ticket and you do need to collect your luggage, the airport gives statistics here, for example June 2016 stats say that 91.25% of non-EEU passengers take less than 45 minutes and 99.21% of EU passengers pass through in under 25 minutes, but those are statistics for the whole month and they don't count the time from landing to reaching the immigration queue. The only answer you can really get is one of probability. With a non-EEU passport, you're likely to pass through immigration between 30 minutes and 2 hours. Even that should give you enough time to get to T4 on a separate ticket if no futher delays.

Not the answer you're looking for? Browse other questions tagged customs-and-immigration london lhr short-connections or ask your own question.

11
Do I have to go through customs, recheck my bag, etc. during my Heathrow layover?

0
Do I need to clear Customs and Immigration at LHR flying Istanbul>Heathrow>Washington, D.C.>Orlando, FL on different airlines?
7
Do I have enough time to do tourist things in London during a 9 hour layover at Heathrow Airport?
6
Connection time needed from USA to Heathrow to Shannon
2
Do we have enough time for our connection at Heathrow Airport?
0
How bad is the transit security queue at IST airport
6
How much time do I need to connect from American Airlines to British Airways at London Heathrow?
1
London Heathrow: What are the options while waiting for hotel check-in?