Why are Chinese mountains scaled by steps? (instead of winding paths)

Question: Why are Chinese mountains mostly scaled by steps/stairs instead of winded paths?
Is there something traditional / practical / religious / spiritual about it that I fail to see?

When hiking up some of the sacred mountains in China, I noticed that a significant portion of the walking uphill was done via stairs, as in this example from Huangshan: 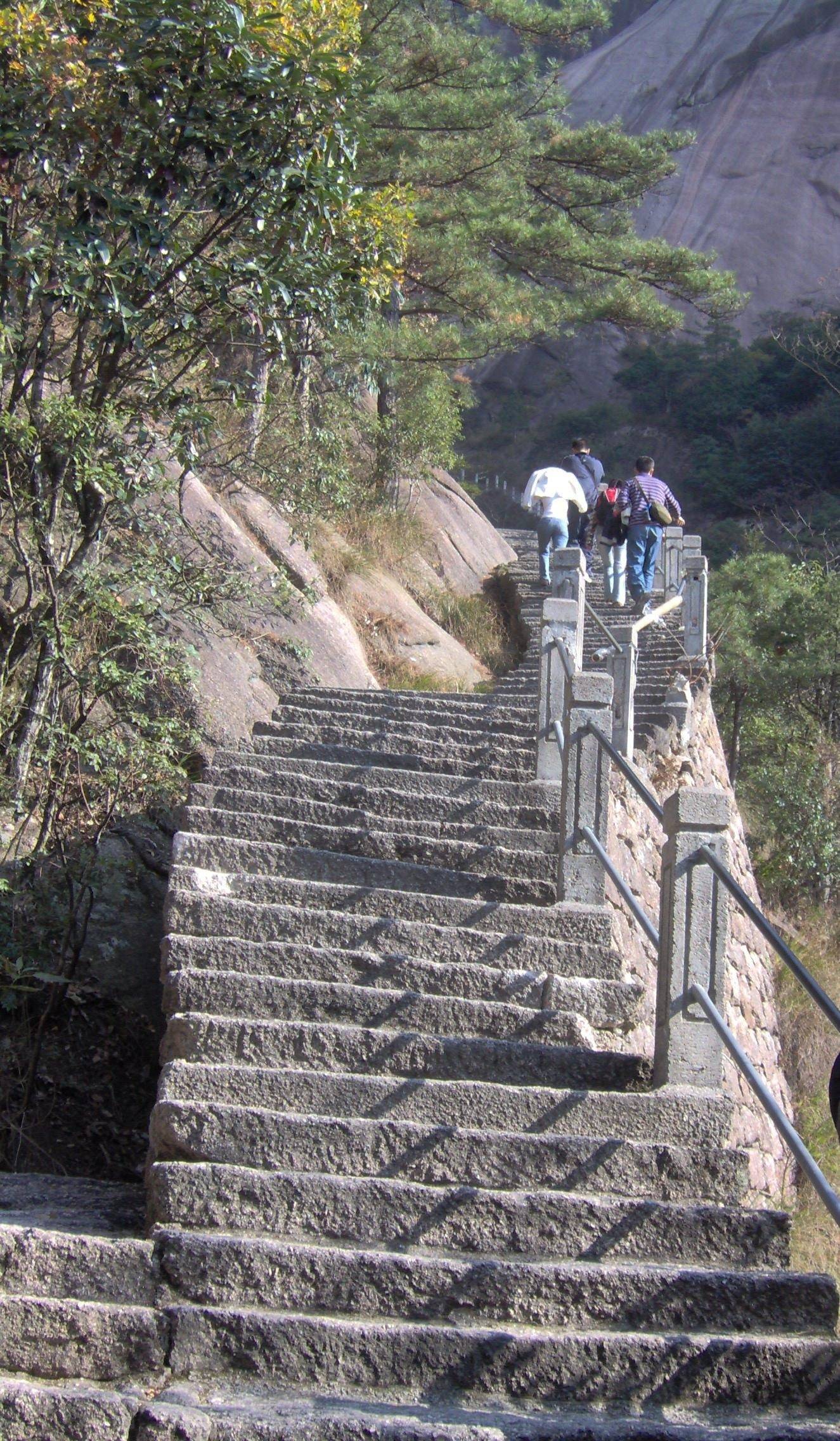 It hurt my (usually trained) legs a ton after a short fraction of the walk uphill, as I was not used to making that many stairs. Basically half of the walk was as in the picture if I recall correctly.
In Europe instead I was used to winding paths (known to me also as serpentines) as in the picture below. Personally (but that may be just me) I find the latter much less strenuous and efficient even in terms of walking time. 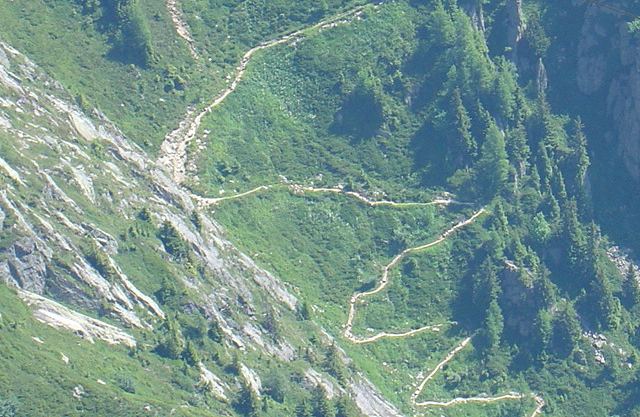 Stairs are easier to walk than rocky paths. In ancient times they allowed royalty more leisurely access to sacred mountains symbolizing their high rank in society, while commoners were likely restricted to walking older foot paths (if they were even allowed on top). Today all 'pilgrims' are afforded the ease of stairs.

In Europe a lot of mountain top destinations were fortifications, so they didn't want easy stairs to the top. And today they try to preserve them as they were.

To add to the other answers, some paths my be susceptible to soil erosion - from foot traffic and rainfall. This eventually makes some sections almost impassable for some people, as well as damaging the terrain and surrounding vegetation. I have seen this first hand in Hong Kong. For example: 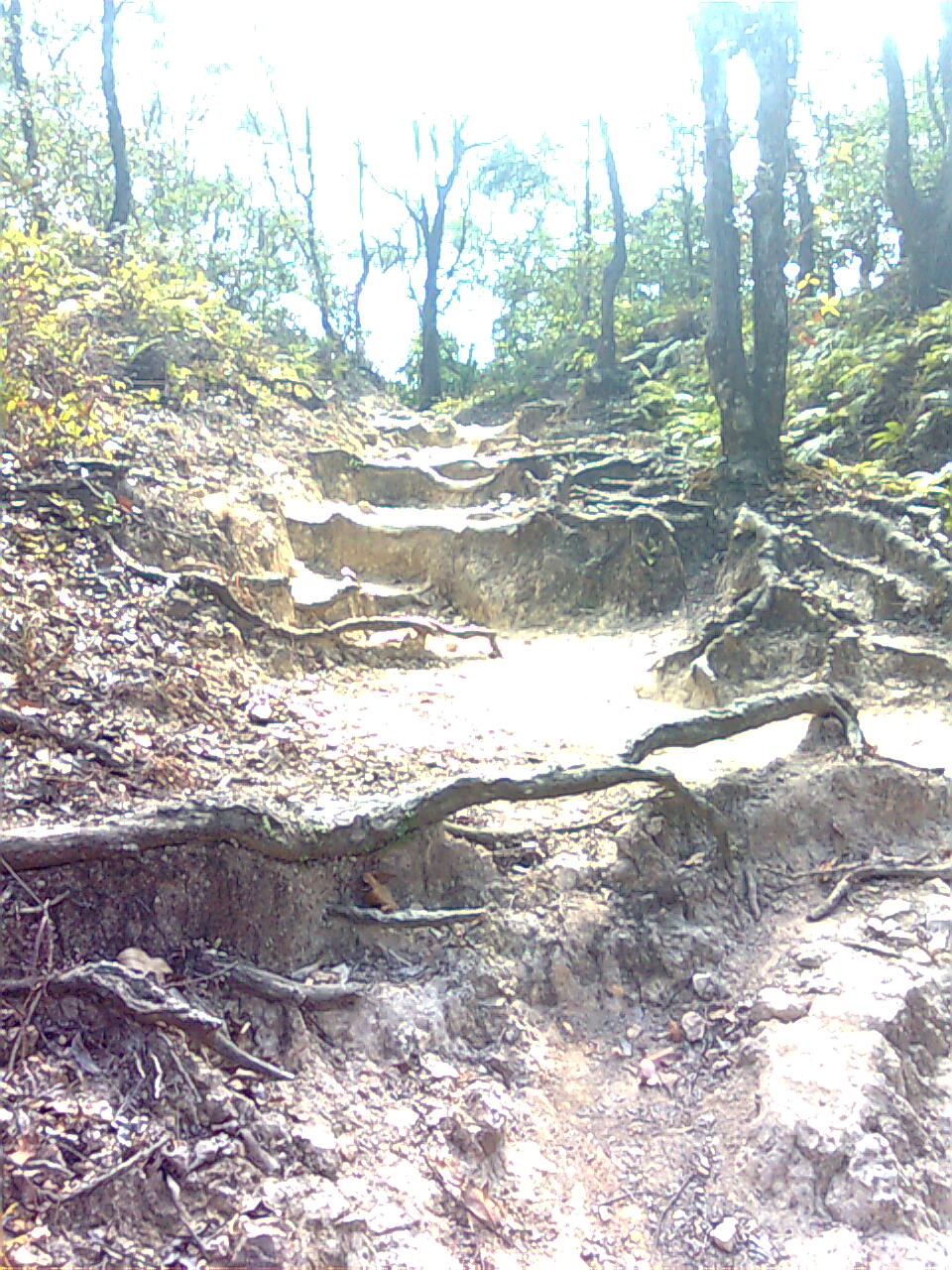 So in many places, steps are built. In HK these were originally made just with basic wooden risers, kept in place with metal stakes and a few rocks and earth as treads . Many of these were constructed in the 1970s and 1980s, though these also suffer from soil erosion, though obviously less so than if just left alone: 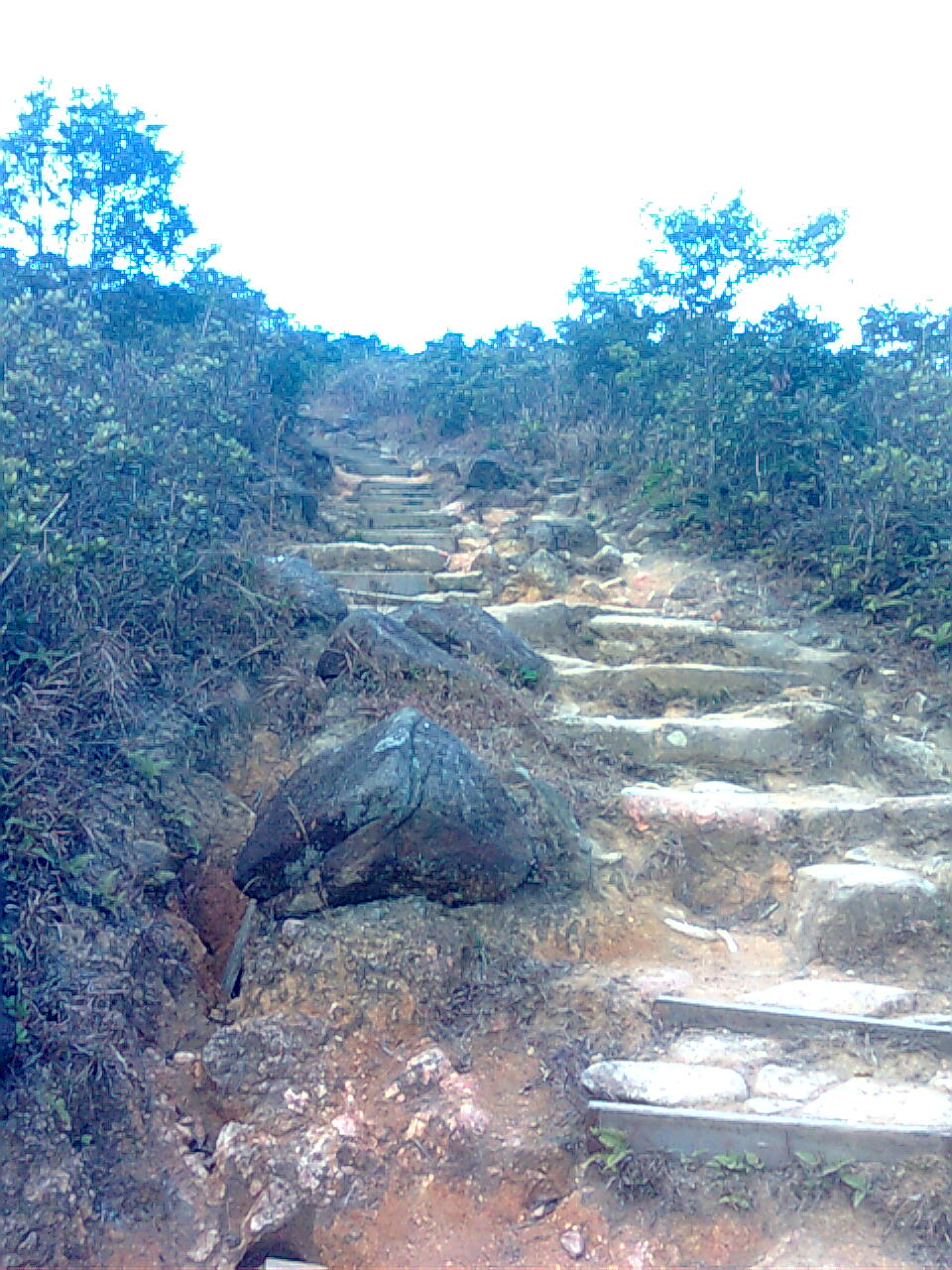 When funding and manpower are available, eventually these are replaced with concrete steps: 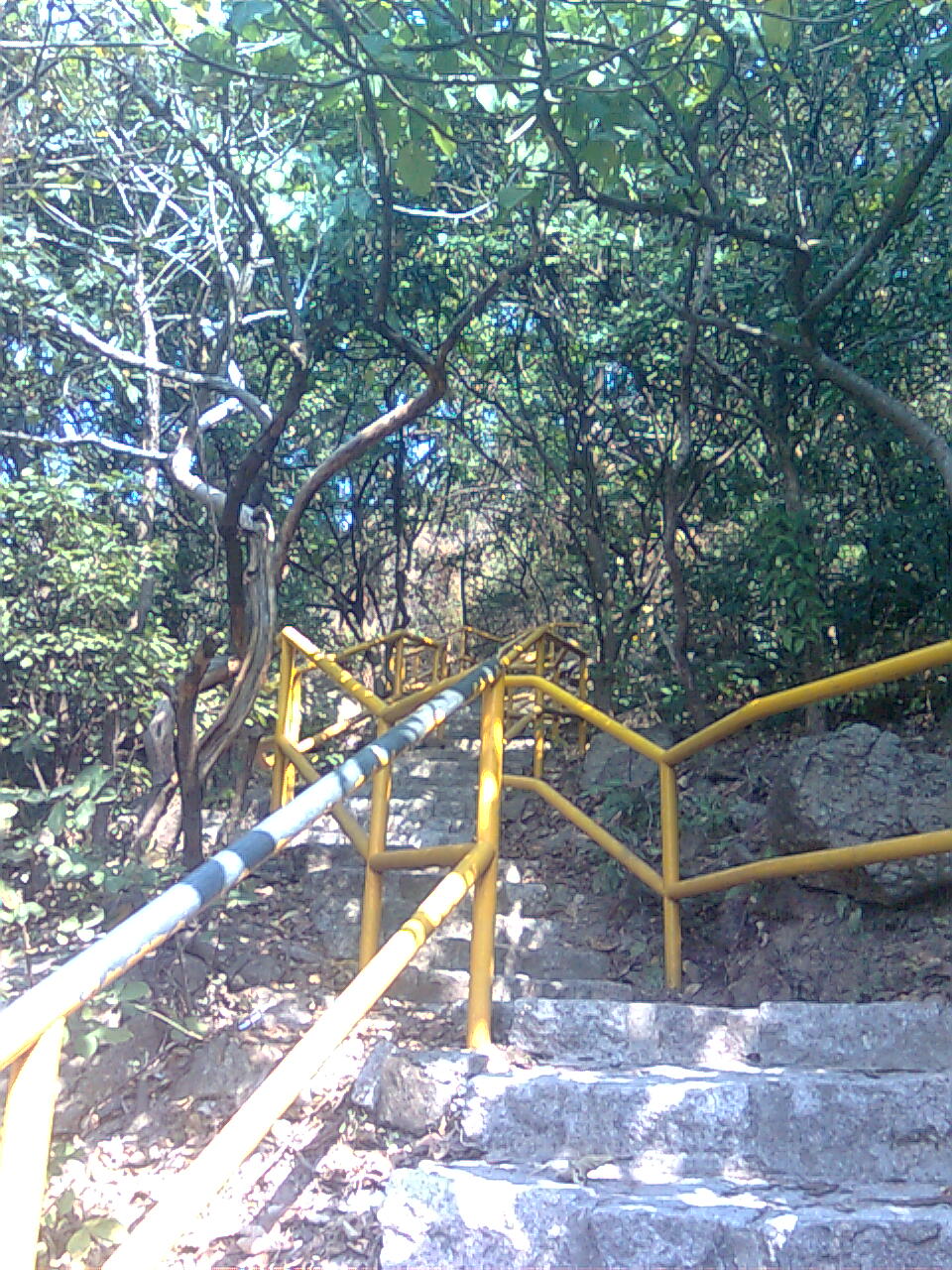 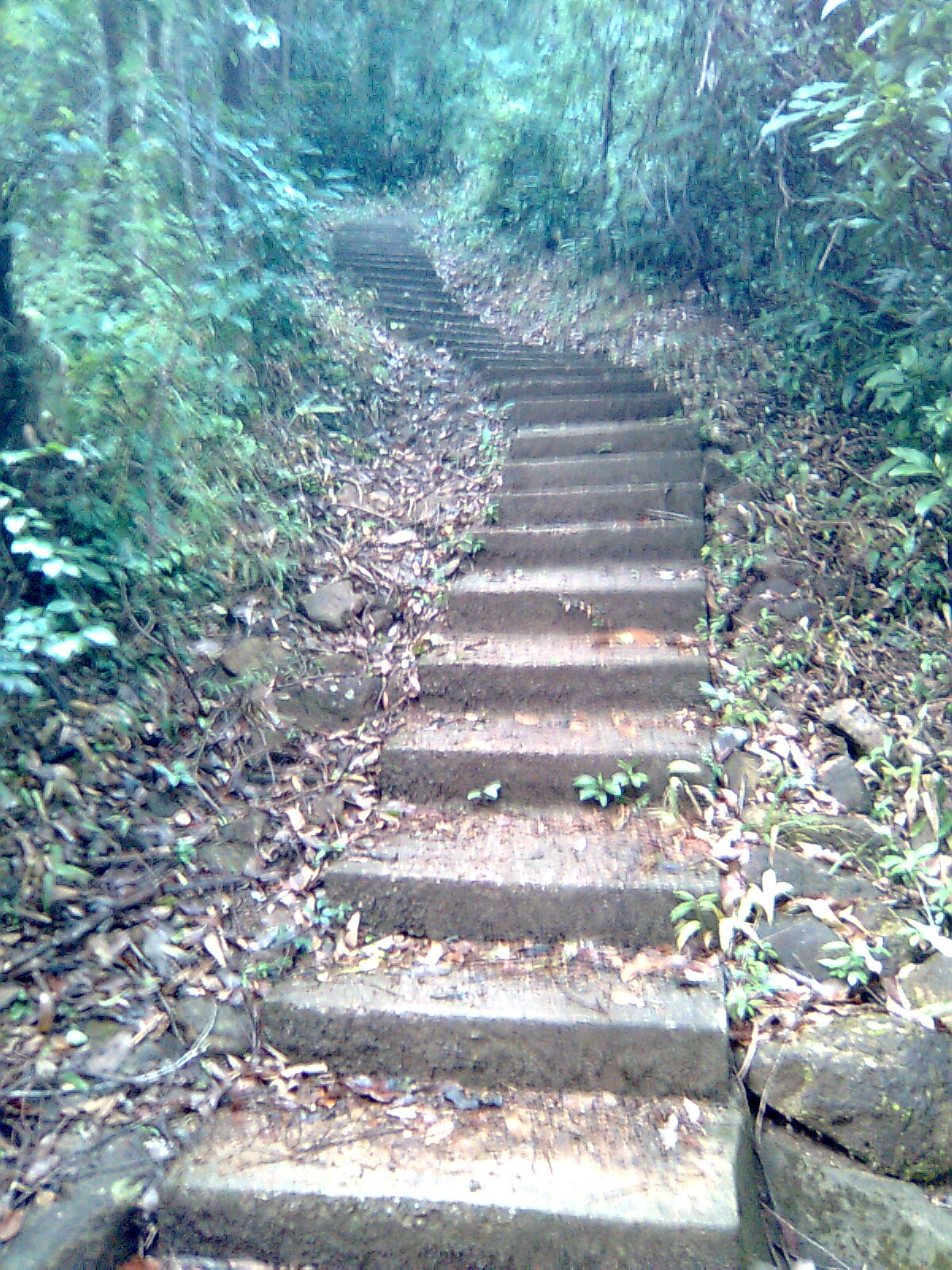 In most of the mainland, hiking trails are a relatively (compared to Hong Kong) new phenomenon and so modern (ie concrete) construction methods were used from the outset in many places.

To address a comment on another answer, often concrete paths are built but these are not possible where the terrain is steep.

When many people climb the same path every day, natural rocks become smooth, slippery and dangerous. An example in Europe is the path to Château de Montségur in the french Pyrenees.

Stairs are less prone to such wear over time.

Back in the times (or what I was told many years ago by some locals) is that they would let a donkey lead the group to find the path of least resistance. The natural instincts of the animal would find the best path for climbing (wonder what IQ is required ... as opposed to humans :) Considering they used the mules and such for loads/cargo that was a requirement for commerce and travel to be able to climb passes ... try that on stairs.

The stairs will kill your knees/muscles fast while the paths allow for a more "rested" climb (might require more time, but you can get there). It also allows for traffic if the path is wide enough.

On tourist-heavy peaks you are more likely to find man made structures like stairs, a restaurant on top, or cable cars, which leads me to the assumption that visiting the peak of the sacred mountains in China may be something that's rather popular with tourists, maybe?

I have another possible explanation that I cannot corraborate with online sources at this time.

I visited Japan several years ago, and as one does (and should definitely do), I visited many Buddhist temples and Shinto shrines while there. I believe it was a Buddhist temple (as opposed to a shrine) where I first noticed two sets of stairs. There was a steeper set, much like the ones pictured in the question above - not unusually steep, that led up the hill/mountainside and through the main gate of the temple. 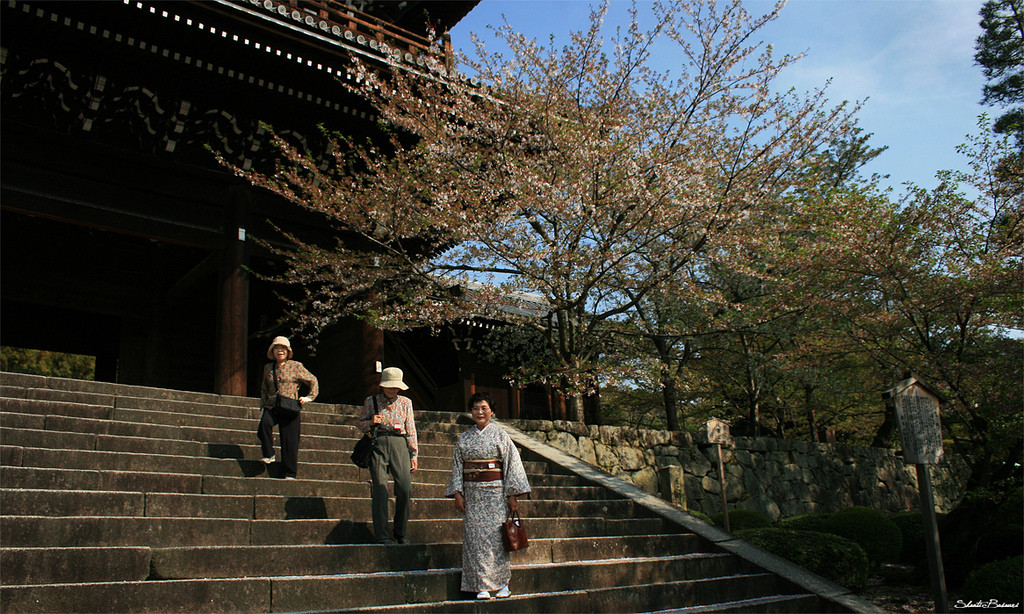 Then there was also a much shallower set, with the flat part of each stair being slanted and perhaps as deep as six feet/2 meters, and the riser of each step being less than four inches/10 centimeters. These gentle, shallow "stairs" (more like stepped ramps) were hidden from the main view of the temple, and came up the back or side of the mountain to a plain entrance. 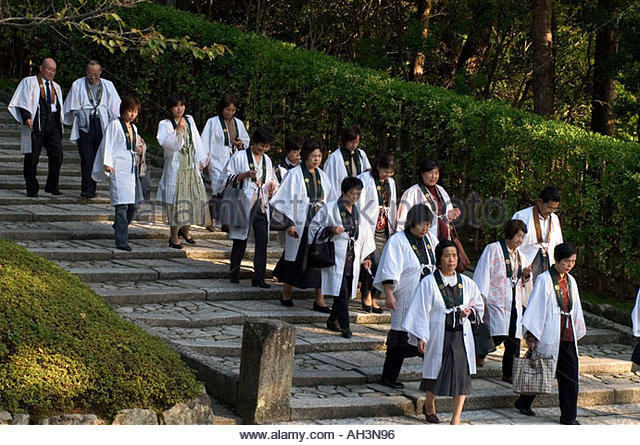 I asked the walking tour guide why there were two sets of stairs, and I expected it had something to do with moving large statues or other mechanical tasks and services. According to the guide, however, it was actually meant to segregate the men from the women, to the disadvantage of the women.

At the time the temple (and many other temples besides this one) was built (according to the guide), women were required to wear clothing that greatly restricted their movement. They could only take short, shuffling steps because of the tightness of the wraps around their legs. That meant they could not climb a typical set of stairs. I'm not sure which fact led to the other, but the synergy was that women could not mount the main stairs and enter the main entrance to the temple along with the men. They had to shuffle up the back stairs which were carefully designed to be just climbable by women in the required clothing.

I have no knowledge of prohibitions on women climbing mountains to shrines or temples in China, nor am I aware of similar clothing restrictions. I only mention this because there are some cultural similarities between Japan and China, and when I saw the pictures of the steep stairs and the gentle switchbacks, it occured to me the stairs could have been made difficult intentionally.

A less sexist possibility is that since the stairs are likely leading to some place that has some sort of religious significance, the climbing of the stairs represents a sort of pilgrimage or penance, and therefore should not be made too easy on the penitent.

I would say just based on the photos (and I realize they are just examples) that whether or not you build stairs or switchbacks would depend entirely on the landscape, the composition of the mountain, and surrounding vegetation. If I were to try to plan a path to the top of the mountain, I would look at what I had to work with. If I had the real estate to make switchbacks, it would certainly make my job easier, but if I was looking at boulders and steep, heavily forested terrain, it would be much easier to just plow straight up. I would want to move as few rocks and cut down as few trees as possible. This would seem the most logical to me...

The average wage in central Europe is five times that of rural China.

Which does not mean that the alpine states do not invest quite a lot into maintaining hiking paths. In Europe it's just more efficient to use methods which are less labor-intense and more machine-intense.

When you build stairs up a mountain terrain, you need to invest quite a lot of manual labor. Every single step needs to be planned and hand-build by workers. Serpentines, on the other hand, can be done quite easily with machines. When you have less people and better heavy machines, it's far easier to dig 100m of straight, slightly ascending path along the slope of a mountain, make a 180° turn and repeat.

Machine-built paths are also often machine-accessible paths. This allows the local forestry industry to move heavy machines up and down the mountain (large parts of the alps are used for forestry).

A secondary advantage of serpentines is that they also work as avalanche barriers. Avalanches can be quite a menace in the alps.

Another aspect is cultural. Serpentines are a far more severe change of the natural landscape than stairs. When you consider a mountain sacred, you want to damage it as little as possible. But there are no "sacred" mountains in Europe (Yes, Europeans like to put crosses on the summits, but that only makes the summit sacred, not the rest of the mountain). For the past millennium, the slopes were timberland and hunting grounds and the alms were farmland. The mountains were developed for economical reasons, not religious or cultural reasons. Economical use means you want to use carts to get stuff up and down the mountains, and serpentines work much better than stairs in this regard. The idea that the natural beauty of the European mountains must be preserved is (historically-speaking) a rather new idea. How much of the landscape is still "natural" is debatable anyway. Spruce and pine monocultures are definitely not natural, but people got used to them over the past centuries, so now they consider them part of the landscape. And so they consider serpentines.

According to physics, Work = Force X Distance. Therefore, the same amount of work is done to ascend a mountain by stair or by inclined path. What you will find is that with a stair, the distance is shorter and the work is greater; and with a path, the distance is greater, but the force is less.

And if you consider the same speed (distance/time), it will be faster to climb the stair, assuming no stops for rest. But, I would expect the same resting heart rate and calories burned by either way when measured at the time the last person gets to the top given rest breaks when needed.

P.S. You can't take a rolling cart up a stair.

Based on pure speculation, I would think it is much less overall work to cut stairs into a suitable mountain, rather than create a terraced road using switchbacks.

I mean, imagine you, alone, are responsible for creating a path to the top and you only have a hammer and chisel...

Additionally, if you were continuously improving the original path, as it appears may be the case, from some of the photos in the OP, the original path was likely a straight line to the top. Most people needing to reach the top originally, would have likely followed the shortest-path to their goal. Thus, unless the geographical features already supported a switchback approach, the default would have been shortest path.

Not the answer you're looking for? Browse other questions tagged china local-customs hiking mountains or ask your own question.

6
What are the current rules for converting Chinese currency to US?
8
Parts of China that aren't dominated by Han Chinese that are easy for foreigners to access
17
Why do Chinese people need a visa to travel abroad?
10
What countries are on the list of approved tourist destinations for Chinese citizens?
8
What are the dimensions for Chinese visa photos?
3
In practice, are Chinese tourist visa applications processed in four working days?
58
Why does the Chinese visa form specifically ask about visits to Turkey?