When driving in Spain or its islands (Lanzarote, Ibiza etc) I have noticed that the locals tend to drive around roundabouts in the outer lane, ALWAYS, even when going all the way around.

Is this part of their highway code? It's not a problem, as long as you know to expect it!!!

I can't say this is official, but sounds like a good explanation.

The following explanation is taken from the Spanish equivalent of the Highway Code.

“When there is more than one lane on a roundabout, you will normally travel around the roundabout in the right hand lane – the outside of the roundabout”

So what exactly is the inside lane for?
“to carry out an overtake or if the lane is signed for your direction of travel”

I translated the above into spanish and searched google for the wording. I came across this site which seems to be an official Spanish traffic site with an explanation and a graphic.

Edit: From comments this is a particularly unusual type of roundabout. See image in Jcl's link. 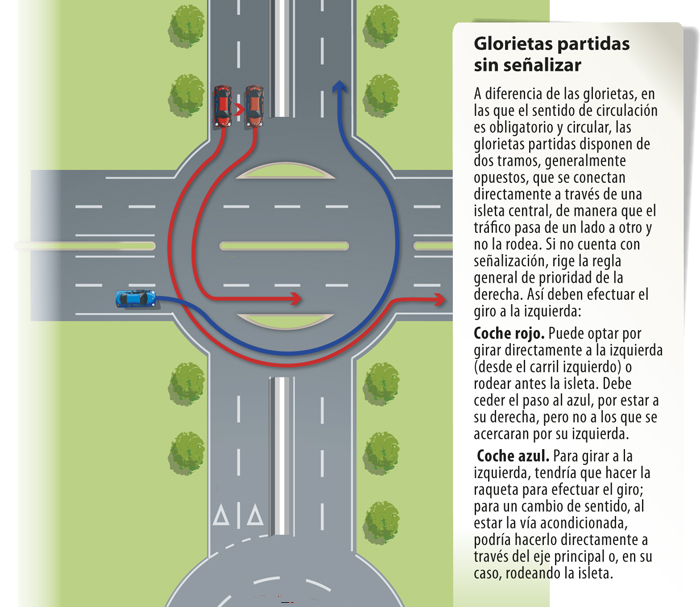 Not sure if that helps though!

Another forum dicussing the issue with conflicting information about what is actually taught in Spain.

I found this article from the National Department of Traffic saying that most of the drivers don't drive correctly through roundabouts. I quote:

I don't have the driving license, but from family and friends that examined recently, the norm is pretty similar to the one in England OP described, it is just people are bad drivers.

As a Spanish, living in Spain and long time driver, I'd say the correct way is the one you describe you do in Britain (and it's the one I do when traffic permits)...

... with one caveat: don't know how it is in other places, but at least in Spain, on any collision, if one driver is switching lanes while the other is not, then the switcher driver is taken as "guilty" and its insurance has to pay the third-party damages (plus for most insurances, you won't get any payment for self-damages): so people just tends to make it on the safe (albeit incorrect) side: if you do the roundabout on the outer lane, you make sure you never switch lanes inside, so no matter if you hit anyone doing the correct thing, or get hit by someone else, you'll get paid for damages.

Yeah, it's absurd, but ask this question to spaniards, and you'll get this answer most of the time (I have).

In my specific region (Murcia, on the southeast), whenever there's not a high load of traffic (and sometimes even if there is), if you need to exit on the other side of the roundabout, people will tend to just drive straight (or almost) through roundabouts, so using basically all lanes. And yes, in folklore, we often get cricitised by it (and rightly so).

This is what the DGT (the transport principal in Spain, or Dirección General de Tráfico) says you should do on roundabouts (source, from 2014: http://revista.dgt.es/es/multimedia/infografia/2014/1008-Como-circular-en-glorietas.shtml ): 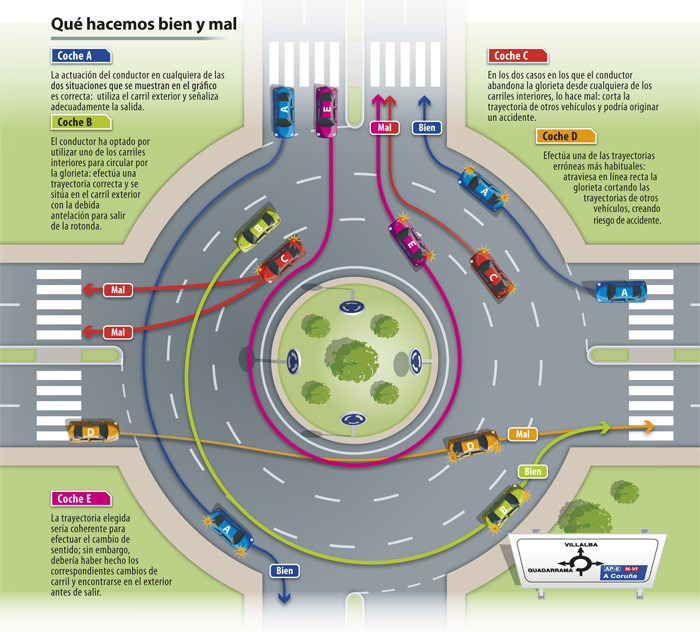 Seems they are actually encouraging the usage of the outer lane (in the image, "Bien" means "Good", and "Mal" means "Bad"): The only cars doing it clearly good are the blue ones (car "A"). There's also car "B" which does it right, but it seems to come out of nowhere (it's already in the middle of the roundabout), and since "D" (which is what I described in the fun fact above) does it wrong by changing lanes, there's no other "correct" endorsed way.

I find all this very wrong (why would they make more than two lanes anyway, if using the inner lane would be always wrong?), but just adding it as it has some "officiality" to it.

There's also one animated video on this link (from May 2016)

This subject caused a small twitterstorm in September 2016 when the Guardia Civil (one of the Spanish police forces) published a badly done explanatory image which many people thought rather unhelpful. They followed up with a much better image (apparently produced by an insurance company, but tweeted by the official Guardia Civil account): 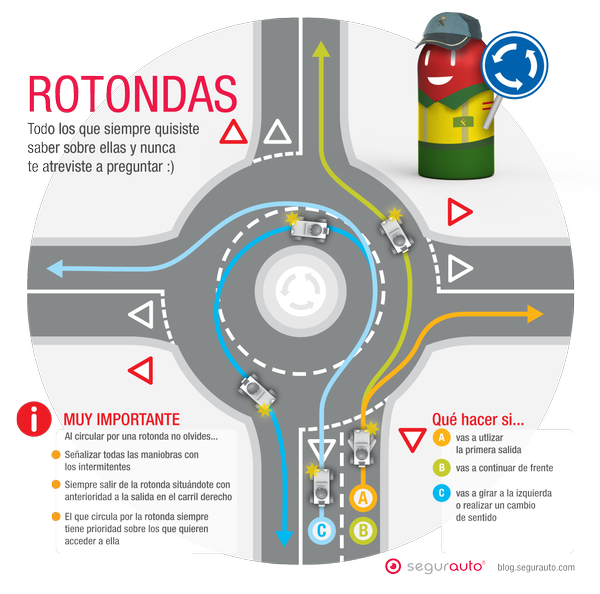 While I was practicing to take my driving test, the teacher told me that the Highway Code had changed recently (I'm talking about a 2-3 years...I think) and now the inner lane of the roundabout was to be ignored.

Before that the use of the inner lanes were as you mentioned, use outer lanes if you are near to your exit or use inner lane if you are going to drive through more than half of the roundabout.

I don't really know why they changed the law, and I don't really see the sense of it, maybe it was to avoid crases or something... I don't know.

As Ika says there are a lot of spanish people who drive wrongly...it's a normal sight seeing a taxi switch lanes withouth using his blinker.

In 2010, I was taught to always use the outside lane of the roundabout no matter which exit I was using, which is the situation as you describe.

In 2012, I was taught to use the outside lane when going less than half a circle, and the inside lane when going more than half a circle (and change to the outside lane before the exit, to exit from that lane). I asked about what I had been taught previously and was told that the regulations had changed, and that the new approach was what I was being taught.

These were with two different driving schools, so maybe it was also different styles of teaching, but I was lead to believe that the law had changed in the intervening period to make the approach more like in the UK.

I don't have any third party evidence to back this up, but maybe as an anecdote this might explain why different people have different approaches!

The problem is that, for decades, driving schools taught us drivers this:

Whenever two vehicles are inside a roundabout, the right of way ALWAYS belongs to the vehicle in the outer lane.

Because of that, most people use the outer lane to turn, because by doing that they (supposedly) keep the right of way and any other cars in the inner lanes have to let them pass.
Sure, they will get honked now and then, but better a honk than being the one to blame in case of an accident.

I wrote "supposedly" because that rule is nowhere to be found in the actual law that regulates driving code, but that's a different problem.

Not the answer you're looking for? Browse other questions tagged driving spain or ask your own question.

24
How do I safely navigate a two-lane roundabout in the UK?

9
What is the driving time in a car from Zamyn-Uud to Ulaanbaatar?
33
What does it mean to be in the fast lane in California?
10
Roundabout in left drive countries
2
Do Spanish Hotels Copy Passports?
10
What is the official rule on Albanian roundabouts?
2
Can I (Spanish citizen) fully sponsor a Schengen visa applied for through a Spanish consulate?
5
Spanish Expressway Toll Refund