Flight Search from anywhere to a specific destination

Many flight search engines allow you to pick a departure airport and search for flights to anywhere. E.g. Google flights gives you a nice map with prices next to destinations for a set of dates and an origin you selected. We covered this question widely in "How can I do a "broad" search for flights?" here on our site.

I want to have the reverse, i.e. I know my dates and my destination (for a one-way flight) and I want to know from where it is cheapest to fly there. Is there any flight search engine out there to achieve this?

Google flights does not do this, they pre-compile the "from"-field if I try to leave it empty. I know I could use Matrix with a wide range of departure airports but that does not give me low-cost carriers and I do not trust the matrix results for such a wide range of parameters anymore.

Edit: It has been asked in comments why I would want such a feature. Well currently I'm planning my summer vacation and I would like to spend one week traveling around basically anywhere in that area before I have to go to a specific location at a specific time. One of the main price and convenience factors for me is that final flight so I would like to optimize it first. I'm sure I'm not the only one with that kind of constraints.

Of all the search engines known to me, it can be done with Kiwi.

Say I want to fly to Madrid from anywhere in Central + Eastern Europe, I can choose Madrid as my destination and a circle encompassing approximately my suitable departure airports as shown below. 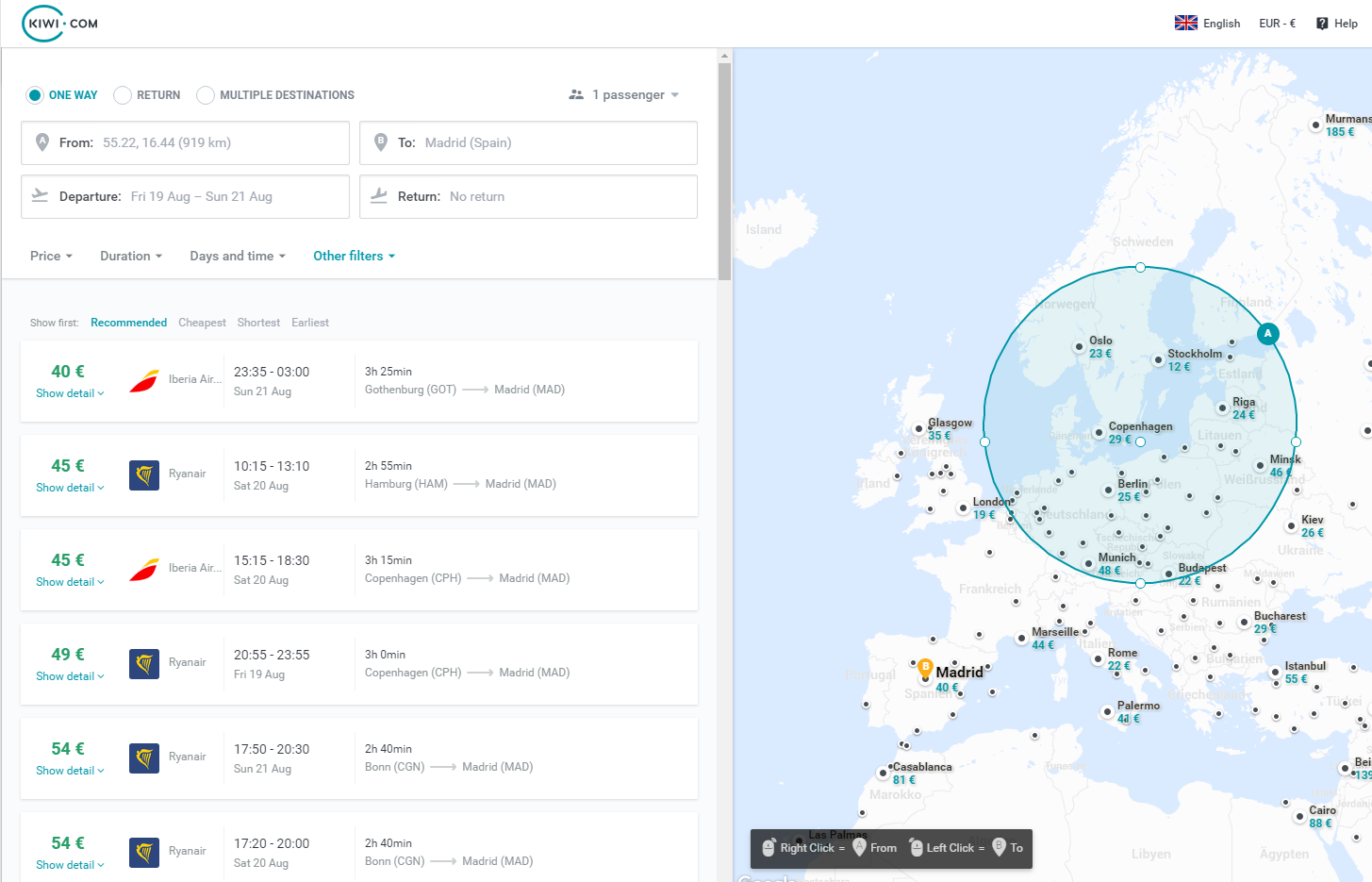 Only look to the list on the left as I could not make out any sense in the prices shown on the map.

Kiwi has plenty of options, you can

I suggest you to search for direct flights only, as they have a weird option of connecting two separate tickets on low-cost carriers with a "Kiwi-guarantee", read more in their FAQ if tempted.
Further warning: I have no idea what flights/airlines are covered by kiwi, in this example it shows both low-cost and full-service airlines but I would not bet on it at all times.

Further reading:
I touched upon Kiwi in this answer of mine.

I have no affiliations.

This is one of the reasons I liked the Airline Route Mapper data.

Say I want to find out all the routes with a destination of IOM:

Only problem is that the data is infrequently updated. However it's a good pointer to what is likely to be available. The other data sets will allow you to import data into something like SQLITE and then filter based on country, distance, proximity to somewhere else, etc.

Edit: As mentioned in comments this only allows routes to be found and potential origins would have to be fed into another flight search engine for pricing.

Alternatively, skyscanner allows origins at a country level, e.g. UK to IOM or France to MAD. 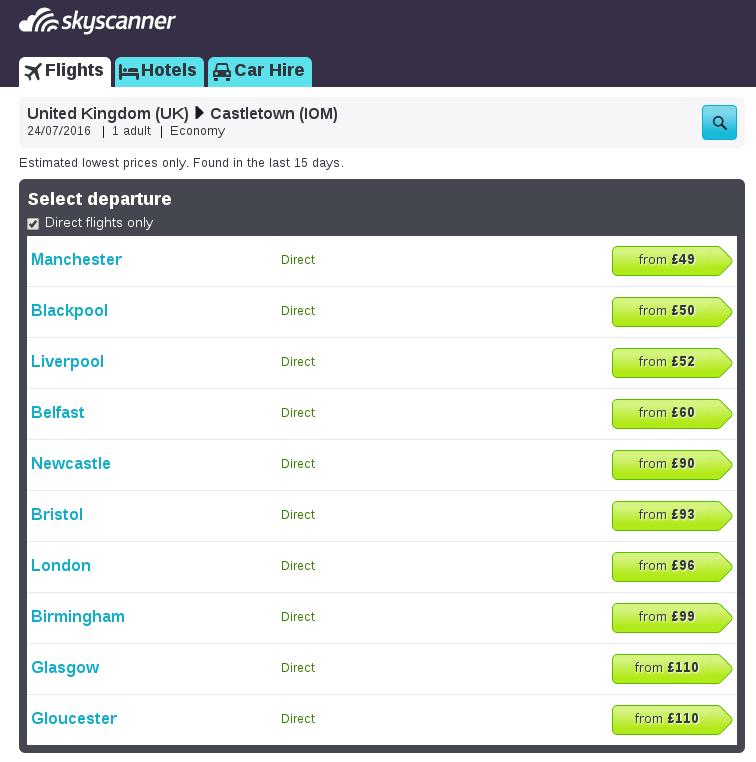 It's not exactly what you want, but in google flights you can enter multiple airports for both departure and arrival airport, separating the airport codes with commas. You can use it to restrict your search to a reasonable list of airports you may be interested in. The results can be filtered and sorted in the usual way. Example: find all flights from all airports in New York, plus Boston and Houston to a few locations in Europe. 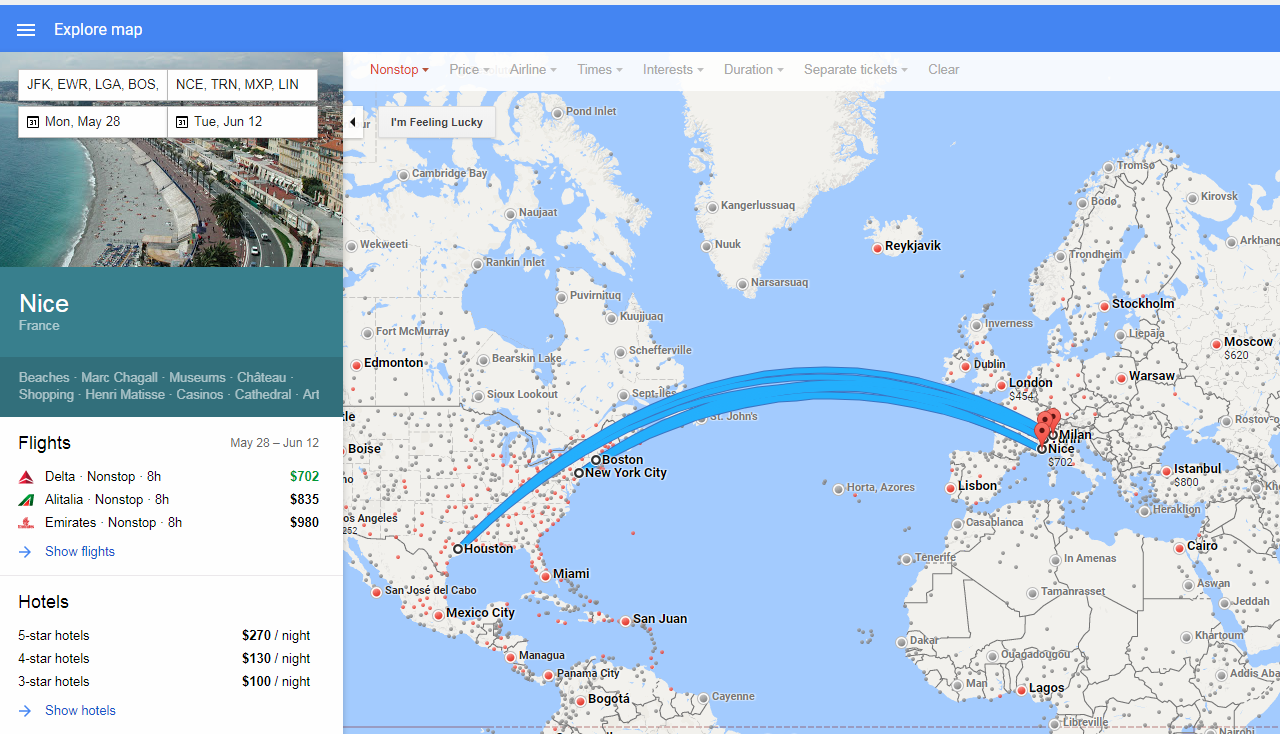 Most airlines fly to a destination and back again. Pretend you are flying the other way to get a feel for the airlines and their fares. This way you will narrow it down to few routings. Then do a few specific searches for your actual direction of travel.

The other way is to not be so obsessed with cost. For example, consider if it is worthwhile spending an extra €10 on the bus, plus an extra night's accommodation, and getting to the airport at 5am, just to save €30 on the airfare.

4
Is it possible to do "Europe" -> "SFO" kind of search for airline tickets?
3
Search engines for cheapest flight to a specific location from anywhere?
115
How can I do a "broad" search for flights?
21
When I know the airline, the flight number, and the airport at each end, but am very flexible with dates, how can I find the cheapest flights?
6
Cheapest flight "from any city"
4
Is there a tool for planning "nested" round trips?
2
Flight Search Specifying Duration of Stay
3
Is there a website allowing to see arrivals and departures at a specific airport on a specific date months in advance?

5
Flight search engine for specific date for outbound flight and undefined date for return flight?
23
Cheapest flight to anywhere at any given time
6
How to search for (cheap) flights, for flexible travel dates within 1 week or more?
18
Searching for flights to "Anywhere" in narrow time frame
17
what is the most advanced flight search engine besides Azuon and Matrix?
2
Flight Search Specifying Duration of Stay
3
How to search for a multi-destination flight when flexible on dates?