Which plug from the Apple World Travel Adapter Kit should I use in Mongolia?

I purchased an Apple World Travel Adapter Kit back in 2011, and it contains two plugs that seem a close match to what's required for Mongolia (Europlug, Type E). Frustratingly, the manual didn't describe which type the plugs are, just a subset of countries they work in. One's called "Round, thin pins", and is described as suitable for (IIRC) continental Europe, while the other is "Round, thick pins", which is described as suitable for Korea (presumably South Korea). My kit doesn't include "Slightly angled, round, thin pins", which is mentioned in About Apple World Travel Adapter Kit - mine must be an older kit than the present one.

Which of the two that I have is more suitable for use in Mongolia?

You need an adapter that looks like this one. 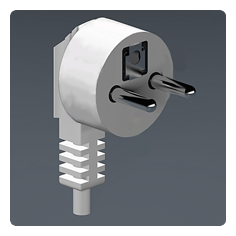 The world traveler kit doesn't include such an adapter, it only has the "thin one" (type C), which should fit but it will be loose therefore not recommended.

Not the answer you're looking for? Browse other questions tagged power mongolia or ask your own question.

21
What kind of plug adapter should I pack for India?
12
What kind of plug adapter should I use when traveling in Indonesia?
3
Can I take a two pin travel adapter plug in my hand luggage?
4
Can I plug an adapter into a power strip when going from UK to Europe (Spain)?
2
Traveling to South Korea, Should I buy a type C or F plug adapter?
1
What power adapter do I need to use when traveling to the US?
4
Which Travel Adapter works for Macbook to the Philippines?
16
Is it safe to plug a power strip into a travel adapter plug?
10
Can Apple World Travel Adapter Kit be used in Iran
30
Is it safe to plug one travel adapter into another?