Would it be safe to travel from Europe to South-East Asia overland with an ex-USSR-military truck?

I am thinking of travelling overland from Europe to South-East Asia with my own truck, but I concerned about personal safety in some areas.

I am concerned about my safety, driving from Europe, via Georgia (possibly by ferry over the Black Sea to avoid Turkey), then Azerbaijan, Iran, south Pakistan along the coast, India, Myanmar or China to Thailand.

If I buy an Ural-375 ex-USSR-military truck, would this be safe? Would it not attract unwanted attention, hostility? Or is it a relatively common sight in these areas that it would not raise eyebrows?

Generally I want a big truck, that will provide a high level physical security against common criminals, but be somehow not so unusual in the area that it would blend-in, and not be a subject of unwanted attention.

Additionally a not-unusual truck in the area would be easier to get parts/repair if it would break down. 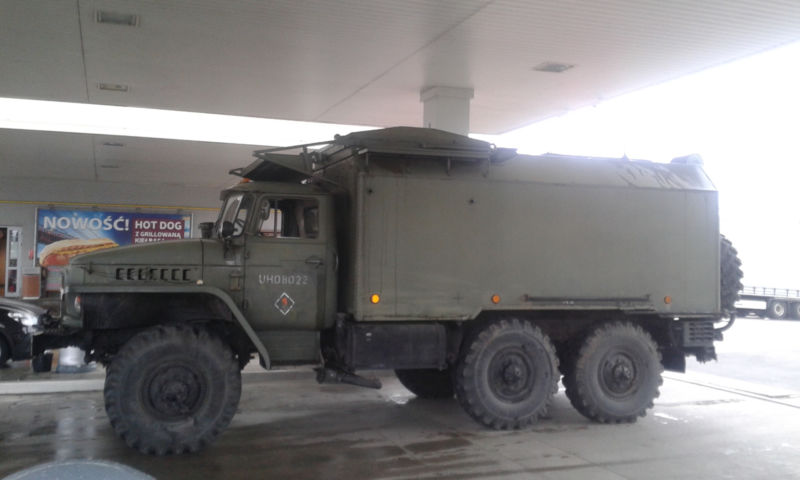 I have been driving ex-military and civilian trucks of the 12 tonnes class as a camper van. I know that several travelers in "military green" trucks have been turned around in African countries, because of the look of your car. Common wisdom is, that you at least should put huge "peaceful" and colorful stickers on your truck, if you do not want to repaint it.

Dark green vehicles are more common in former Eastern Bloc countries. See here to see what to expect on the road. I still would put some distinct non-military sticker - e.g. a map of your planned route - on the truck. Even with the Ural you will stick out as a tourist so better make sure you really stick out as a tourist. With a truck you always get attention and this is a good way to start interacting with the locals.

At border crossings you are a very unusual sight - a non commercial truck. Just drive by the trucks waiting for days and queue with the buses and cars. Say to everybody "No T.I.R., no commercial. Camping car!" and expect an additional hour of pure curiosity at Customs. They all want to take a look.

In most Countries the "No Trucks" signs do not apply to heavy (12T) truck-based camping cars. Generally every official is delighted to see such a crazy thing, wants to see inside and then lets you go shaking his head in disbelieve.

Regarding physical security: People around you can't look into your windows which can give a lot of comfort. A truck is trivial to make difficult to swiftly dive away by a thief. E.g. emptying the air out of the reservoirs so parking breaks can not be disengaged without regaining air pressure. You can also shift the low range gear into neutral which can not be shifted back without air pressure. Disconnect batteries and fuel lines etc. The downside is that yourself also can't make a swift exit ...

If you are concerned about security you probably should have a crawl through hatch between living quarters and truck cab so you can drive away without stepping outside should there be scary people outside.

Generally having a padlocked chain inside between cab doors and perhaps strangling the steering wheel is considered pretty safe.

All Eastern Europe and Central Asia has guarded truck parking lots available at every corner.

If you can read German you will find loads of information at the four wheel truck association forum.

If it is still painted in military fashion, then yes it will attract all sorts of unwanted attention. If you have spruced in up a bit with civilian colors, etc, it will still attract attention but likely more out of curiosity.

Have you checked the laws of each country you plan to traverse? A vehicle that size could come with commercial driver license requirements, road permit issues, along with the expected cross border hassles of vehicle registration, insurance and licensing rules.

And while the box back maybe more secure against common criminals, the cabs are not that secure so it could simply be truck jacked and driven somewhere secluded to be pried open at leisure.

Not the answer you're looking for? Browse other questions tagged safety driving road-trips overland off-road or ask your own question.