Disclaimer: I am not advocating or planning on breaking any traffic laws, lots of fun can be had within these limits.

As an Initial D fan, I would like to do a roadtrip to the various mountain passes featured in the manga and anime series, which are mostly located around the Kanto region. 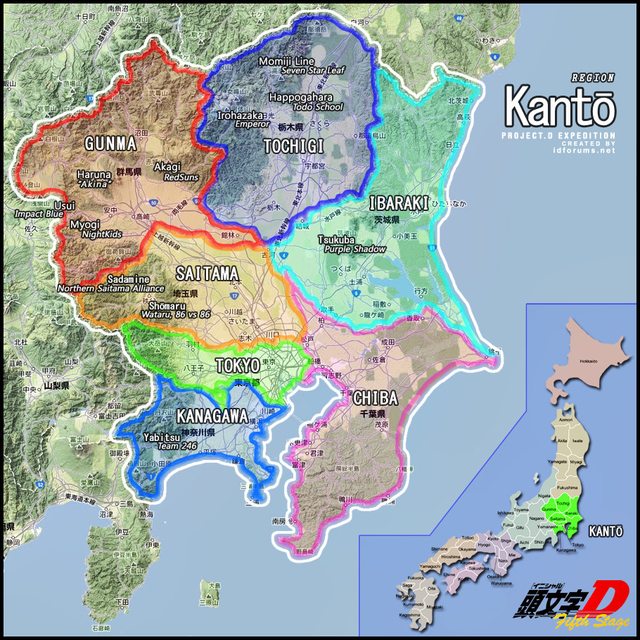 I already went to a few passes using a rented Suzuki Swift, but it's power and handling are less than stellar, hence why I'm looking for more "fun" vehicles.

I would like to rent a car for about a week. Price is not much of a problem.

(I don't want to specify an age limit, but any answer that allows a 22 year old to rent cars gets my thanks.)

Try an exotics rental agency, like Omoshiro Rent-A-Car, omoshiroi being Japanese for "interesting". For example, their Chiba (Narita Airport) outlet has a bunch of interesting cars on offer, including a Toyota AE86, Nissan Skyline GT-R, Toyota MR-S, Toyota 86G, etc. (Note: there are multiple pages of listings, click on the little "次へ>>" to go to the next page.) The listings do not include model years, and obviously most of their cars are much newer than the 90's, but they do have a number of vintage options as well. Prices start from around ¥10,000/day.

On the other side of Tokyo, near Hakone and Mt. Fuji, there is Fun2Drive which has a nice chart showing make/models available, along with recommended touring routes. Prices range from 5000-12000 yen for the first 90 minutes, depending on the car and duration

Not the answer you're looking for? Browse other questions tagged japan car-rentals automobiles kanto or ask your own question.

13
Car rental in Japan
13
What is the most common transmission type for rental cars in Japan?
13
Why is it harder / more expensive to rent cars with automatic transmission in Europe?
5
Where can you rent Tesla S or X model in Frankfurt?
7
In Japan, should rental cars be reserved in advance?
2
Rent a car in Greece (Thessaloniki) and drive to Macedonia
17
Where in France can I rent a Citroen 2CV car?
3
No rental cars available even though the booking is confirmed
3
How can I find where the cars for a particular rental car office are located? Where are the cars for Goldcar at Málaga train station?