Cheapest season to go to South Africa from North America

What is the cheapest season/months to visit South Africa from North America?
How can one best take advantage of "low" season offers? 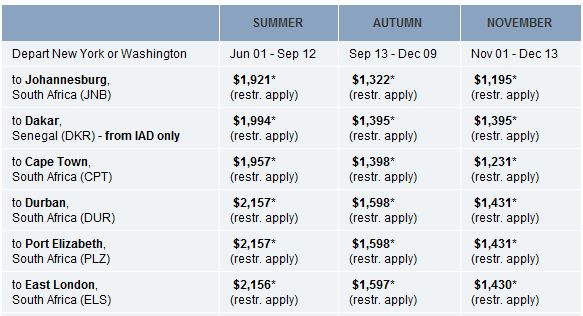 Going at other times of the year when the flight costs are cheaper means that accommodation prices are higher.

While it may not be exactly what you're asking, I feel it's the correct answer, and that's NOT to go in winter. There's a reason it's priced like that.

I'm assuming you're off to South Africa for one or more of a few reasons: big game, scenery, culture. As someone born there, I can highly recommend it for tourists.

Now, I have returned as a tourist as well, so can give both sides of the story. You don't need to be super-confident about your travelling ability - I wasn't the first time I took four friends back, and we found ways to be resourceful and keep the costs down.

As you mention you're trying to best take advantage of prices, consider that in low season, prices are lower, yes, but there's a reason - it's colder, fewer animals, etc. However, in the heat of summer, you'll struggle to see animals as well - they shelter under trees and the like. In winter, you also get fewer daylight hours.

My suggestion, and I did this myself, is to bridge and get the best of both worlds - go in autumn or spring. We went for a month in March/April, and I went back with a family member another time in September - so in Autumn and then Spring, and it was an excellent time to go. Hotels weren't full, so there were still specials to be had and deals to be negotiated. They'll often bend over backwards if you say where you're from. One hotel in Durban was "you're the guys from New Zealand!" on arrival, as we'd emailed to book. It was a pleasure being so welcomed. You won't get that (well you might, but it's less likely) in high season.

As I'm sure you're aware, making the most of cost isn't about getting the lowest dollar, it's getting the best value. It also meant that there were a few less tourists in the game parks. In the mountains. On the beaches. And yet it was still plenty warm enough to enjoy the sun, it wasn't the wet season either (we had precisely 2.5 days of rain - 2 of which were unfortunately in Durban).

Now fortunately we also have others ask questions on here about South Africa :) You're obviously already looking at flights. It's the biggest expense, and once you know when you're going, ask here again (especially in the chat room) as some of us pride ourselves on beating prices people find. (we're weird like that).

Next you may be looking at car rental. Should you book from outside or wait till you get there? We have an answer for that. These days, sites like kayak or other multiple-search sites will get you such good deals, that you can safely book ahead, but there's no harm in emailing a couple of the local rental agencies and seeing if they'll give you a discount, or a bigger car, especially if it's not peak season.

Itinerary. I'm not sure what you're after, but we had a question asking about a possible two week itinerary a while back. I was between jobs at the time, so wrote a full response, with links - hopefully some of that might be useful.

Wine tours? We've done research on that too and found some of the best contacts. Some of the users on here have actually been to the wineries and written about them.

Another person asked about going in January and booking ahead. It's like any other place - book ahead if you know where you're going to be. Saying that, we were booking guest houses when we went, and these days I travel hostel, which would be a lot simpler, I'd assume. But back then I was booking for five people so wanted to make sure I got it right.

Another thing to note is the school holidays. The Gauteng (provice) holidays tend to cause massive amounts of traffic in Natal - especially on the N3. Durban is overrun with holiday-makers from Gauteng. Best to keep an eye on that if you're wanting a relaxing time on the beach. It also tends to be when prices go up as well. So really to maximise your benefit, try for a time that is not peak season, not totally off season, and not during Gauteng holidays ;)

While most multiple-airline search engines will find South African Airways, they won't necessarily find ComAir or the other smaller ones. Have a look at this wikitravel page on air travel within South Africa. Not only will it give you some of the smaller airlines to fly with (ComAir is fine, can't vouch for the others, but it's only a couple of hours flying anywhere anyway), but it also lists car rental companies to compare prices with.

If you do drive, be aware it's on the left side of the road, and while the speed limit is 120km/hr, if you do that you'll be tooted at and passed - most travel around 140km/hr. There's a reason the road toll is very high. Don't worry about driving on the left - if you currently drive in North America, it's not too hard to learn to use it the other way - I've had to do that coming here to Canada :)

Right, I hope that helps. Feel free to add any questions to your question (edit them in) and I can always edit my answer to help.

The winter months is when most of the schools have three weeks off. That is usually when the parents who have to go on holiday want to go because then it is easiest to take there children along.

This makes it so that this is pretty much peak season for all the holiday places. I would try and avoid June and the first two weeks of august for this reason.

Children also have the last two or three weeks of December off but South Africa being a predominately Christian country this time is usually spent more with family and relatives than at garish holiday resorts.

We travelled to South Africa, Zimbabwe and Botswana just this May. In SA we were in Kruger and Cape Town, up north around Vic and Chobe. The weather was perfect, nice and warm by day maybe a light jacket at night. No mosquitos!! I mean, sure did you need a jacket to leave at 0:dark:30 to drive through the Orpen Gate at Kruger. Want to go back to see "spring" because fall was bloody lovely. From Canada, air fares don't really change year around and my research for the next trip to Africa, I can't really find a big cost difference in game drives or lodges.

I would recommend traveling to South Africa, during the winter season. Mainly because hotel prices, guest houses, lodges, and flights are a lot cheaper. As well as having shorter lines lol. The some of the downsides would be game drives aren't as nice because the weather obviously affects the animals. But if you prefer to peak season, you would have to wait to till about after August. It would probably be a better experience but the holiday would definitely be significantly more expensive. I would suggest checking out - Fly Safair bookings or wikideals, as someone already suggested, and for accommodation Air BnB, Guest house or alodge. But guest Houses would allow you to meet more people.They usually have some decent places. But would suggest planning your trips well in advance.

Not the answer you're looking for? Browse other questions tagged budget south-africa seasonal or ask your own question.

14
Itineraries in South Africa (+/- 2 Weeks)
9
Can I visit vineyards in Stellenbosch without booking a tour in advance?
4
Is it better to book a car rental in advance, or once I'm in South Africa?
6
How difficult is it to find accommodation in South Africa in December / January?

11
Is it cheaper to book excursions locally for South Africa?
8
Is there a cheapest city / airline / season to fly one-way from anywhere in Europe to Australia?
3
Cheapest way to get to Istanbul from North America
6
Cheap multi-route (open-jaw) flights
2
South Africa visa complications