Hastings Battlefield and the 'Right to Roam'

Later this year I will be guiding a tour of the "traditional" Hastings Battlefield. It will be a walking tour with about 5 - 7 clients.

The route is pictured below... 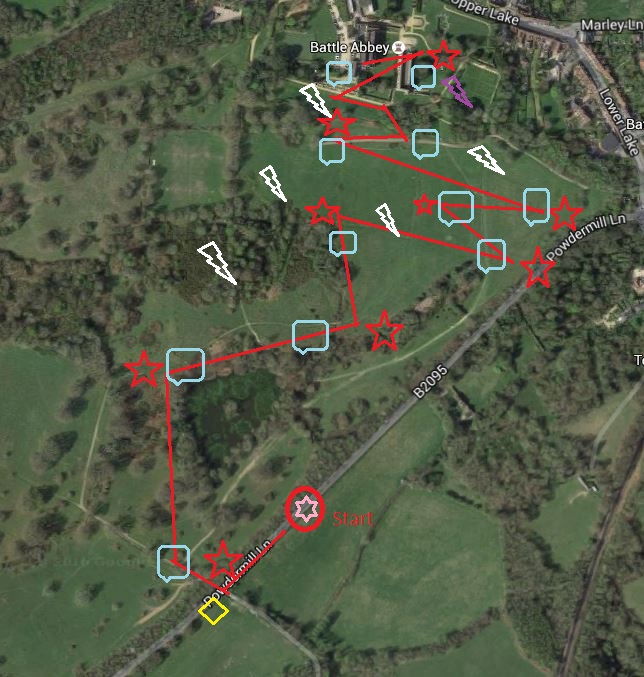 The starting point is shown with a pink star.

I want the tour to start at the lay-by on the sunken road now called Powdermill Lane as I reckon this is near to where the Duke's cavalry mustered in preparation for the battle and the lay-by makes a convenient drop-off point for the clients' transportation.

Like many sunken roads in southeast England, the northern edge is bounded by thick, unmanaged bocage which is impassable on foot.

So I propose to head 50 meters southwest to where there's a passageway through the bocage. This is gated, but there's enough room for people to pass around the side of it. As shown on the map above there's about another 25 meters to pass on this property before reaching the battlefield proper. I will have purchased all the requisite battlefield tickets in advance. 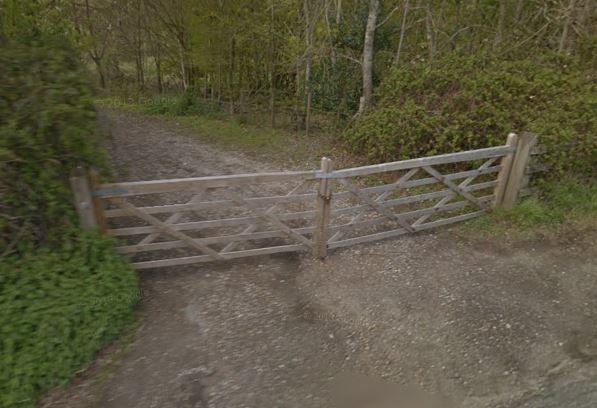 Does our right to roam extend to this situation? Or more practically, is it really necessary to find the owner and get permission to cross this property?

Note: no interest in the recent archaeological findings that place the battle elsewhere; that's the subject of a different question.

Other 'right to roam' question(s):

There is no general "Right to Roam" in England and Wales, in contrast to Scotland.

The Countryside and Rights of Way Act 2000 only allows public access that can be recognised and "Right to Roam" on "Access Land".

(1)In this Part “access land” means any land which—

but does not (in any of those cases) include excepted land or land which is treated by section 15(1) as being accessible to the public apart from this Act.

While not the legally definitive map, to most intents and purposes and UK's Ordnance Survey Landranger (no. 199) and Explorer (no. 124) maps can be considered as good as you are going to get information on the UK. It is possible to view limited areas of Ordnance Survey mapping use Microsoft's Bing Maps, such as the area around the Battlefield. (Notice that "Great Wood", immediately to the east is marked as access land). You can also view the maps directly from the OS, however it requires an account and either a subscription or use of a limited trial). However, looking at this area, there is no indication that the land is either common land or open access land, and the elevation above sealevel is 20-25m. There are also no public rights of way indicated along this route. Natural England also keep a map specifically for access land, that is available here

Given that there is a closed (and locked) gate, at the point of access, it would seem reasonable to suggest that one crossing past the gate could realise they were not invited, and be found to be committing trespass, although it would be difficult to demonstrate any loss as a result of such.

In addition to this point, it would appear that English Heritage both charge for and restrict access to the battlefield. As such, they might not be happy for you to access the site from this route. If you have the tickets, then it is unlikely they could claim trespass, but you might get told off.

In practice, you are likely able to make this journey without attracting any particular attention (at least as far as the private track goes, not so sure about walking on to the battlefield). However, if you were to regularly take groups through this route, the likelihood of you eventually being observed and challenged, or the landowner noticing large numbers of footprints and better securing the access increases.

Not the answer you're looking for? Browse other questions tagged legal walking england guides history or ask your own question.

15
Balmoral: The Right to Roam and the Royal Family

31
What is the business model of commercial free walking tours?
14
Is there a comprehensive list of Magna Cartas and their locations?
7
What is a good resource for walks in the Peak District?
16
When do pedestrians have right of way in Australia?
15
Balmoral: The Right to Roam and the Royal Family
4
Japanese Ema and Omamori Shrine Charm Guide
0
Can I (US Citizen) legally travel to France and Back right now? (late May 2020)