Which brings me to Canada. What bemuses me is when I see Canadian airports - they (so far) all seem to start with Y. YVR = Vancouver. YYZ = Toronto. YEG = Edmonton. And so on. VR is sort of an abbreviation for Vancouver, I guess, and Edmonton at least starts with an E, but I can't explain the Toronto one. And where the Y comes from I have no idea. Can anyone explain why they start with a Y, historically?

When the process of assigning international airport codes began during World War II, it integrated many existing identifiers set up by airlines, weather stations, radio navigation beacons, railway terminal telegraph stations, and so on. According to a quotation in an Airliners.net thread (take it for what you will, but it was the closest thing to a real citation I could find), Canada's were based on existing weather service codes:

I have also seen the theory advanced that the codes derive from radio transmitter identifers: ITU assigns the prefixes CF-CK, CY, and CZ to Canada, of which CY and CZ are reserved for transportation. CYYZ was the beacon at Malton, Ontario where Toronto Pearson International Airport is now located. On the other hand, airports like YQX and YYT have Canadian codes even though their corresponding radio callsigns would have had VA-VG or VO prefixes, the codes assigned for Newfoundland, which did not join Canada until 1949. It's possible that being closely tied to Canada, they used Canadian codes, or that they adopted new codes after confederation. It's also possible that some airports were designated after weather stations and others from radio transmitters, and that at least some transmitter codes are based on weather station codes in turn.

Some special interest groups successfully lobbied the government to obtain their own special letters. The Navy saved all the new 'N' codes. Naval aviators learn to fly at NPA in Pensacola, Florida and then dream of going to "Top Gun" in Miramar, California (NKX). The Federal Communications Committee set aside the 'W' and 'K' codes for radio stations east and west of the Mississippi respectively. 'Q' was designated for international telecommunications. 'Z' was reserved for special uses. The Canadians made off with all the remaining 'Y codes which helps explain YUL for Montreal, YYC for Calgary, etc. (The start of the the song YYZ by the band Rush is the Morse code for the letters Y Y Z. Rush is from Toronto.) One of the special uses for 'Z' is identifying locations in cyberspace. What am I talking about? Well, an example is ZCX the computer address of the FAA's air traffic control headquarters central flow control facility. ZCX is not an airport but a command center just outside Washington D.C., that controls the airline traffic into major terminals.

Toronto's Pearson is probably a special case where YTO designates all airports in GTA, YTZ have also been taken and I cannot say for sure why YMI was given to Minaki rather then Pearson since it's located in Mississauga but here we have it.

The reason you see resemblance is because its an "old" airport. Originally, airports were called by the city name. Los Angeles airport was LA, San Francisco was SF, San Jose was SJ, etc. These are the IATA codes.

But, there're not enough 2-letter combinations for all the airports, and an additional letter was added. Thus, LA became LAX (LAA is an airport in Colorado), SF became SFO (SFA is an airport in Tunisia), San Jose became SJC etc. New airports didn't have enough combinations available to follow the convention. Chicago's Orchard Field Airport became ORD (only "O" has any resemblance).

San Jose, California is SJC. But what about San Jose in Philippines? It's SJI. And San Jose in Costa Rica? It's SJO.

Other conflicts also affect the coding: for example London Gatwick Airport is LGW, because LGA is taken by the New York City LaGuardia Airport (both have LGA acronyms).

Many countries systematize the coding internally, for example many newer Canadian airports start with Y, which makes them grouped in the lists of airports. Newer 4-letter ICAO codes (not to be confused with the IATA 3-letter codes, they are not the same) have first letter (or first two) to mark the country/region K for the US (so LAX becomes KLAX), C for Canada (so Toronto YYZ becomes CYYZ), E and L for Europe, EG for the UK (making LHR changed to EGLL), etc etc. Some retain the 3 letters in the 4 letters' coding (like LAX->KLAX), some don't (like LHR->EGLL).

I hope this image, which I prepared some time ago, sheds some light on the topic... 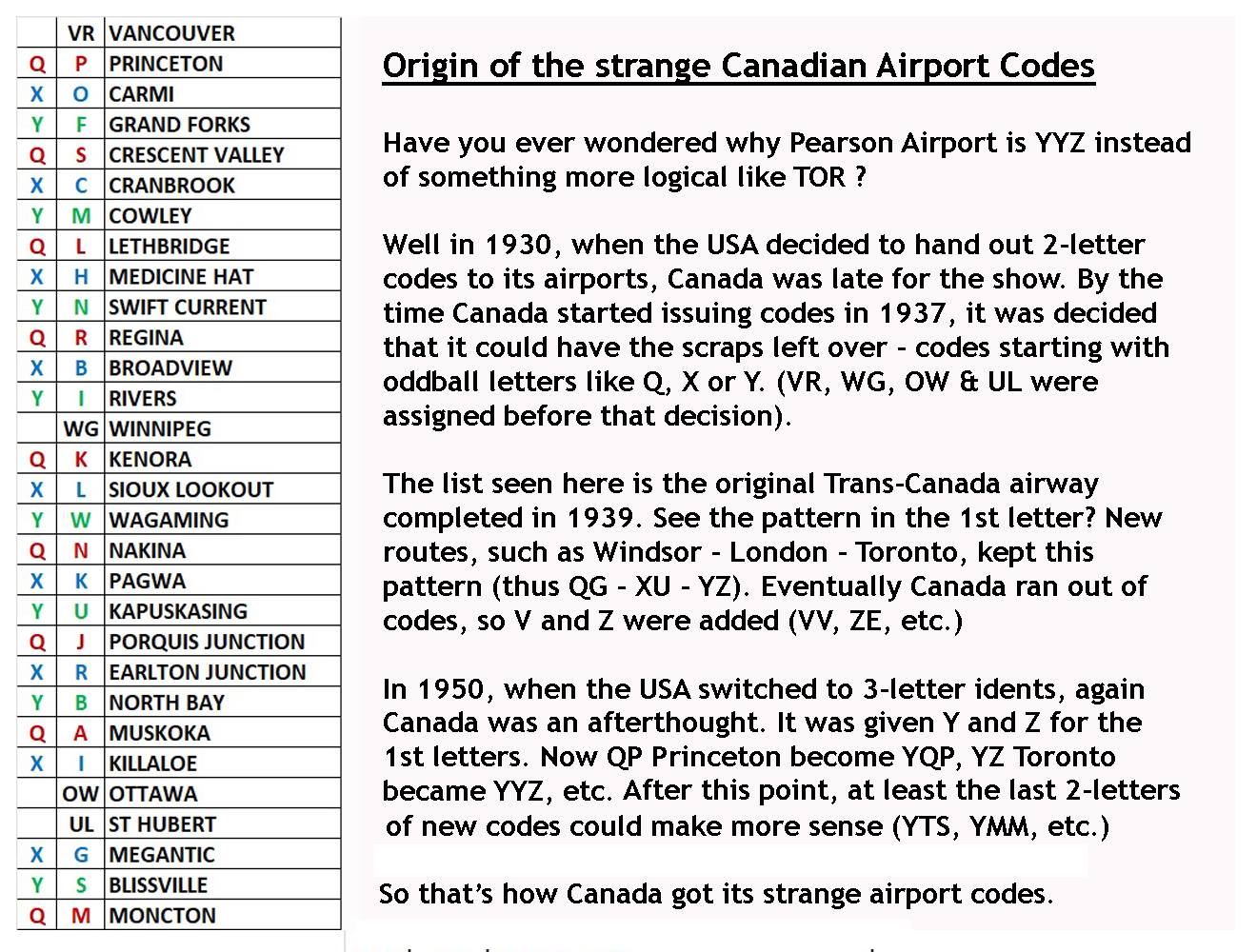 Origin of the strange Canadian Airport Codes Have you ever wondered why Pearson Airport is YYZ instead of something more logical like TOR? Well in 1930, when the USA decided to hand out 2-letter codes to its airports, Canada was late for the show. By the time Canada started issuing codes in 1937, it was decided that it could have the scraps left over - codes starting with oddball letters like Q, X or Y. (VR, WG, OW & UL were assigned before that decision).

The list seen here is the original Trans-Canada airway completed in 1939. See the pattern in the 1st letter? New routes, such as Windsor - London - Toronto, kept this pattern (thus QG - XU - YZ). Eventually Canada ran out of codes, so V and Z were added (W, ZE, etc.) In 1950, when the USA switched to 3-letter idents, again Canada was an afterthought. It was given Y and Z for the 1st letters. Now QP Princeton become YQP, YZ Toronto became YYZ, etc. After this point, at least the last 2-letters of new codes could make more sense (YTS, YMM, etc.) So that's how Canada got its strange airport codes.

There's a table in the image I skipped transcribing because this site doesn't have table markup.

Not all Canadian airports start with Y, though most do and certainly all the big ones - eg Bathurst New Brunswick is ZBF - and there are airports outside Canada that start with Y (search for "(Y" on http://aircargotracking.skysthelimitsd.com/air-freight-news/international-airport-codes/ for tons.) Nobody seems to know why, but my theory is to help everyone know if they were discussing an airport on the opposite side of the border or not.

There are four letter codes for the airports also, and those start with C - eg CYYZ for Toronto - but everybody seems to drop the C unless maybe they're discussing weather stations or radio frequencies.

3
Why is Montreal airport code YUL?

1
What's the closest airport to the Flatiron District and Chelsea neighbourhood in NY?
2
Canada's Transit Visa - Do I need to send off my passport?
4
What's the best way to get from Madrid Airport to Sevilla?
13
Reaching all of Canada's "land's end" spots - which ones are marked?
2
Layover - Guangzhou airport
2
What's the domestic to international connection procedure at Stansted airport?
4
Canadian Tourist Visa - What's happening with my application?
2
Maximum duration for Canada's short term visas?