Trains between Tbilisi and Batumi

How to get by train from Tbilisi to Batumi (on the Black Sea coast)? There should be trains, but the "Traffic General Schedule" on Georgian Railway's site does not mention Batumi (except for a Batumi-Ozurgeti commuter train).

How are the trains like? Are there sleeping cars and are they comfortable?

Take the train to Makhinjauri (also transcribed Makhindjauri) - that's the closest passenger station to Batumi. (Though you can just as well ask for a ticket to Batumi.)

There's also one daytime train (each way) daily, which is a lot faster, 5h 15min. (It leaves at 8.30 from Tbilisi and at 17.55 from Batumi, if I read the railway.ge schedule correctly; I haven't tried this train myself.)

First class (sleeper) ticket in the night train costs 40 GEL (20 €); you'll share a cabin with one other passenger. (Second class is just 23 GEL, but I don't know what that's like.) Buying the ticket early may be a good idea to secure a sleeper. Make sure to have your passport with you!

Tbilisi station is easily reachable by metro (Station Square aka Sadguris Moedani aka Vagzlis Moedani) or taxi. Do reserve some extra time, however, if you don't know the station beforehand; it's not huge, but the platforms aren't marked very clearly.

The Makhinjauri station is some 5 km north from central Batumi, but it's easy to continue to that direction once the train arrives. A bus cost me 1 GEL (I took #10 which goes through Batumi centre but doesn't terminate there), and a taxi could be around 10 GEL depending on your haggling etc. There will be taxi drivers offering their services right when you get off the train.

The 1st class sleeper is not that comfortable (I'd say it's good Soviet Union level), but most likely you'll get some sleep. (Though according to the Georgian businessman I shared the cabin with, "there's no comfort in our trains" and he never sleeps well there.) Earplugs are a must to provide partial relief from 1) noise the train makes (sometimes really loud) 2) laughter, TV or general rowdiness in the car 3) your cabin partner's possible snoring. 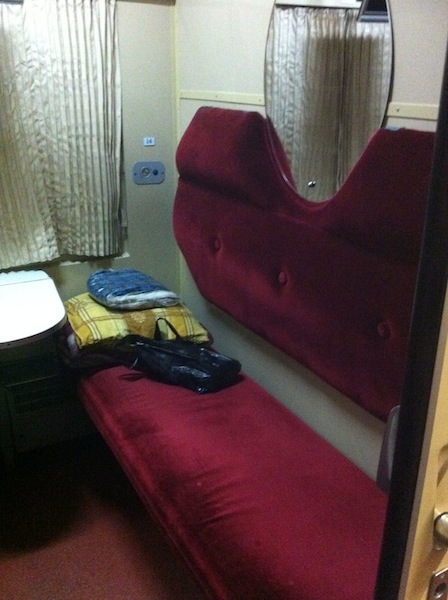 As for safety, it generally seemed safe to me, though I guess how safe you feel depends on who you happen to share the small cabin with. There's a conductor / guard in every wagon (who, according to Wikitravel, "protects the passengers from drunks"). In my case she was friendly and had good attitude (though I'm not sure if she did much about the noise some passengers made after midnight). NB: the Wikitravel article suggests female solo travellers should consider booking both berths of a 1st class cabin, just in case.

So, this can be a cool experience especially if you like trains, but the bus/minibus option definitely has its strong points too (it's cheaper and takes just 4-6h (?), with many more daily departures, and nice views daytime, I've heard). 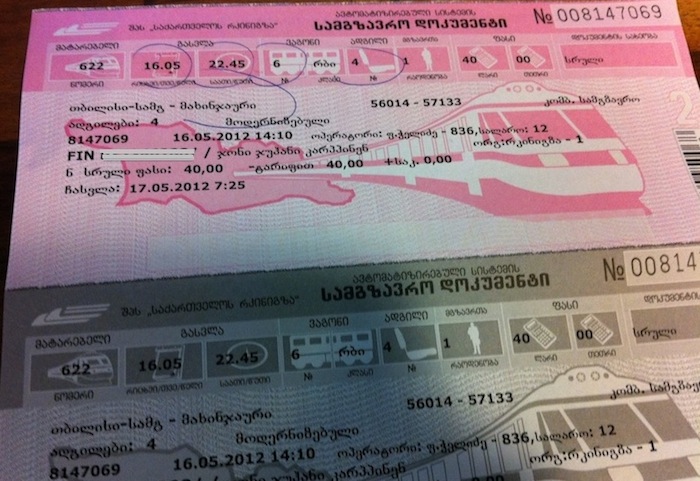 About security: it's become very safe to travel! As I understand nature of georgians even drunk they don't cause trouble even they will like to invite you to share their drinking.

About mini-buses: there is a lot of mini-buses waiting for costumers just outside train station. It is cheap but not comfortable. But you can see a lot during travel. Since government build new roads it takes around 5 hours to get to Batumi, in city itself (not Mahinjauri). But sometimes you need to wait mini-bus to departure for 1-2 hours till driver will get enough passengers. Price a year ago was 25 lari.

If you encounter any problems don't hesitate to approach policeman - they are corruption-free and will help!

I just took the train a first class sleeper from Yerevan to Batumi and enjoyed it. The car was about 1/3 full so it was quite and comfortable. The train trip is a little longer but you can us the internet service as far as either the Georgia country line or Tblishi. It worked very well and customs was a breeze. Just answer a few questions provided your passport and all is well. In Georgia you must surrender you passport for the hour that it takes them the check it out on the train. The staff on board was very pleasant and helpful. I had not done my homework and did not realize that there was no dinner car on the train. So I got hungry later on and asked if their was any food that I could purchase at any of the stops. She said no but returned a few minutes later with a great sandwich and tomato. The train is a great way to get some sleep and travel in comfort. The mini bus I like being a sardine cramped in a can for 5 plus hours not to mention the hour wait in the parking lot waiting to fill the bus.

Not the answer you're looking for? Browse other questions tagged trains georgia-country tbilisi batumi or ask your own question.

4
What time do buses and/or marshrutkas leave from Tbilisi for Batumi?
2
Possibilities to travel from Yerevan to Batumi

7
Where is the closest free beach where free camping is permitted to Georgia, the country?
2
Public transport from Tbilisi to Chiatura in winter?
4
What time do buses and/or marshrutkas leave from Tbilisi for Batumi?
5
Are there ticket offices for Georgian Railways in Tbilisi?
7
Mountain road between Batumi and Akhaltsikhe
5
What is комфорт and why is it cheaper than not комфорт?
1
Getting from Kutaisi airport to Tbilisi (GeorgiaBus)