Is it possible to request a passport stamp when traveling between Schengen countries?

I was just reading San Marino's Wikivoyage page and saw this under "Do":

Get your passports stamped at the tourist information centre. This is an excellent souvenir as they stick a visa tax stamp and then an official ink stamp over the top, €5

First my question was if this is legit because of course there are no border controls inside EU and I have heard many places, including this site, that only border stamps and other official docs can go in a passport.

Looking through Wikipedia I assume it's talking about this: 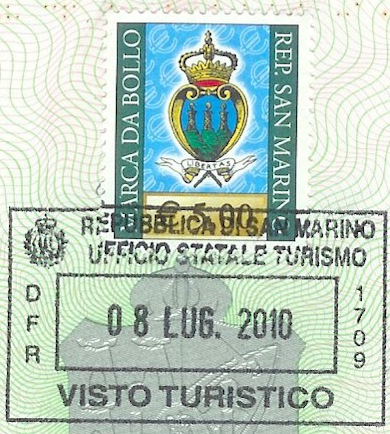 Then I came across Getting passport stamps inside Schengen Area but that is about EU citizens and I am not one. That question implies it is possible but I want to be clear. My question now is is it okay for a non EU person to ask for an official government stamp in the passport even when rules do not require passport stamping? If yes then where can you usually go to ask for that? Train stations?

I just noticed that you originally asked about EU countries in general, and not only about the Schengen area. You have to distinguish between different situations.

Inside the Schengen area

I doubt it's possible to get a stamp when traveling between Schengen countries. I cannot guarantee that it never ever happens and I realize it's not a very satisfying answer but I still think I can justify this conclusion. The thing is that, to my knowledge, EU rules do not explicitly forbid it (national rules or procedures might) but which stamp would you get exactly?

Becoming part of the Schengen areas requires many changes, including the introduction of external border controls following the rules defined in the Schengen Borders code. Schengen states therefore have to provide their border guards with a special set of stamps and have no reason to use older stamps they might have used before.

Clearly, standard Schengen stamps should only be used at external borders. Their use is regulated in details in the Borders Code, each of them have to be traceable to a given control point and border guard (not necessarily one stamp per person but at least some list of who had what stamp at which time) and correct use is essential to enforce the limits on duration of stay. So that's not something to play with and if you manage to find a police agent near an internal border, he or she won't have one on hand or will have been instructed not to use it.

Which means that reliably getting stamps at internal borders would require Schengen countries to issue an entirely separate set of vanity stamps solely to entertain tourists crossing a border they are not supposed to patrol in the first place. I guess you might stumble on someone who still has an old stamp or something but I don't think it's likely to happen in many places.

For example when entering the Schengen area from the UK, getting a stamp is not only possible but mandatory for third-country nationals who do not reside in the EU (with very few exceptions like seamen, aircrew, or heads of state on official business). But third country nationals who reside in the EU as part of the family of an EU citizen (and travelling with the special residence card proving their status) should not get a stamp anywhere in the Schengen area, even if they are, say, transiting between non-EU destinations.

@walter describes an instance where a proper Schengen exit stamp was applied when leaving France for the Netherlands (both Schengen). It was clearly a case of border guards performing a full external check (which is what they would otherwise do at an airport serving non-Schengen destinations). That's also why they would have Schengen stamps on hand.

There are several micro-states landlocked within the Schengen area. Formally, they are not a member of anything (not even the EU so technically that could be considered outside the scope of your question) and they do whatever they want (including applying stamps to your passport). Theoretically, this would seem to imply that Italian (or French and Spanish in the case of Andorra) police should patrol the border, stamp everyone in and out, check that you really have a multiple-entry visa to reenter, etc.

In practice, it's not really the case. Some external borders are notorious for a (sometimes deliberately) lax application of the rules, e.g. Gibraltar and this occasionally creates problems (people having trouble proving they haven't stayed too long or account for a missing stamp). As far as I can recall, the border with Switzerland was also like that before the country joined the Schengen area (travellers at major airports, on motorways and in long-distance trains still underwent full border checks but many roads and even some regional trains were effectively open with a sign warning you not to cross the border if you were not allowed to do it, which would include any situation in which you need a stamp).

That's not really interesting to you as you want extra stamps and are not trying to avoid them but this explains why you could easily get one in San Marino even though it feels as if it's part of the EU and Schengen area.

In early January 2016, I was flying from France to The Netherlands (so an intra-Schengen flight), as as a non-EU citizen, had my passport checked when leaving France, and stamped with a Schengen exit stamp.

I was a bit confused what happened, so didn't have time to ask why this happened. In any case, I left the Schengen area from The Netherlands on a connecting flight, so now have two exit stamps (and no entry stamps) for that day in my passport.

So, in summary, it is possible to obtain a passport stamp while crossing an internal border, though whether this is allowed/correct I am not sure.

I am a non-EU non-UK citizen who has traveled within the Schengen zone. I have stamps in my passport, but these the entry/exit stamps at the airport.

I have made two journeys - which has resulted in 4 stamps in my passport.

During my transits within the zone, I was never asked for my passport; as that's part of the entire Schengen concept - visa free travel between member states.

This is because my passport is an official document and is subject to all kinds of scrutiny. You never know who you might run into at an embassy or a border check point and all of a sudden you have to explain what this official-looking-but-not-official stamp is doing on your passport.

Further, my passport pages are quite expensive - in that I cannot afford to have them used for things other than visas and immigration stamps/endorsements.

I don't know where I would go to get these stamps - since they do not officially exist; but my first port of call would be at a tourist souvenir shop or at a bookstore that sells stamps.

It is possible but I don't know how common it is. I travel with a US passport and I like to fill it with stamps just for souvenirs. (earlier this year I was in Antarctica and visited a Ukraine research station and they put Ukraine stamps in our passports, which felt like a little trophy.)

Anyway some years ago I was driving from Germany to Austria which are both Schengen signatories. As I crossed the border there were no required border controls but I did see an official looking building so I parked and went in and it was staffed with customs officials and I explained that I'd like a stamp on my passport and they gave me one.

(I've wondered for years afterwards, since they had the staff and the stamps, someone must be using it for something, but I was the only one there and outside traffic was just whizzing by, so what was their purpose?)

If you ask they normally are OK.

In France, Cyprus, Norway, Poland and newer EU accession sates they are OK. Ireland doesn't even look at passports and they hand you the stamp to do it yourself. Never ask at Stansted they get emotional and same goes for some IOs at Heathrow they can be awkward.

Stamp in an EU passport means nothing in law if it is at the request of the holder as it demonstrates that they have been allowed free passage but they want a stamp, not the stamp being automatically applied.

I have a great collection in my passports but who is bothered nobody looks at them. Nobody cares as long as you scan or check out OK and the document demonstrates your nationality and identity you are good to go.

5
Getting a weak passport stamp restamped?
19
Left UK without passing through Immigration, why?
8
Is it possible to avoid getting an Israeli passport stamp?
14
How does Schengen know I didn't overstay if exiting through Gibraltar by air?
15
Is it true that Canada doesn't stamp foreign passports by default?
4
Does Ukraine still stamp EU passports at Boryspil airport?
7
Passport stamp when visiting multiple Schengen countries
2
Not stamping a passport on the departure port when traveling to Israel
11
Why does the US sometimes stamp its own citizens' passports?
3
Passport stamp for EU citizen travelling from EU to UK and back